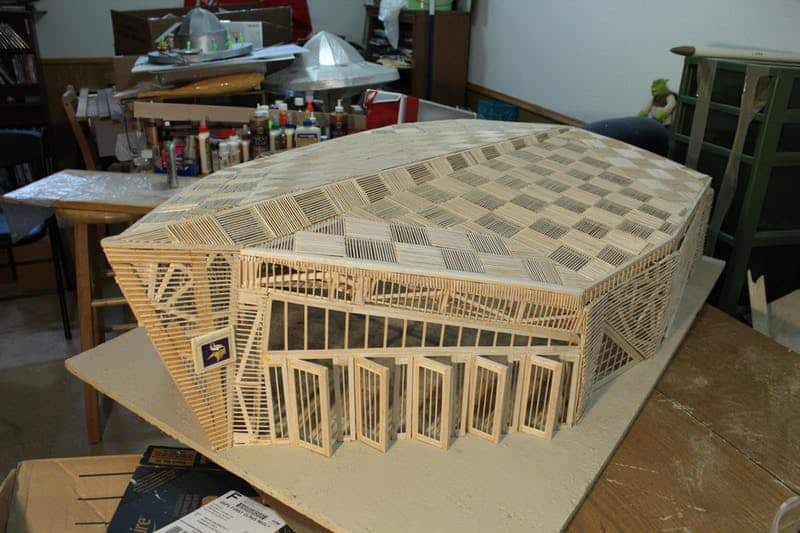 GREG KELLY'S MODEL OF THE US BANKS STADIUM

For Greg Kelly, 67, model building is a form of meditation.

He was raised in Long Beach, the third in a family of 12. “My dad and older brother would build little balsa wood airplanes, I was probably 3 or 4, and they’d work on it on the kitchen table. I’d just sit and watch, curious. They learned to take it and put in top of the refrigerator to make sure it was away from me.”

As a kid Kelly never built a model. He was always in sports. He had 12 years of Catholic school. “I had some nuns who were saints, some not so much. But I wouldn’t trade the experience for anything. It taught me with my projects that they weren’t going to be easy or simple. It was up to me to figure things out.”

He and his classmates were being groomed to be doctors and lawyers.

“When I graduated from high school, I started working in factories and I enjoyed it. I found I personally enjoyed working with my hands!”

The family had moved to Orange County. One day Kelly was walking past a discount chain store called Zodys and in the window was a visible V-8 engine model. He bought it, ostensibly for his brothers. They weren’t interested. So he built it himself, and was hooked.

Meanwhile his father had built a 3000-square-foot commercial building in downtown Tustin. So in November, 1971, Greg got a 180-square foot space to open a business.

He had $325 to spend on inventory. “I was 20 years old, I was still working at the factory, and I knew nothing about retail.” Kelly’s Hobby Shop was open for the next 43 years.

He learned from his customers. When they showed him the boat and plane models they’d built from kits, Kelly started building his own gas-powered airplanes and going out to local fields and flying them. He kept evolving.

Once you learn the fundamentals, he discovered, you can take off with our own design and embellishments. “I got super big into rockets. I did everything short of getting in one and being launched into space.” He had no engineering background but his fellow rocketeers loved his work.

He never started a family. “I was married to the shop.”

He loved doing work while passersby watched, like a guy spinning pizzas in the front window of his shop.

People would stop and say, “What are you doing?!” Kids would drop by after school. They don’t necessarily have to make the model. But just to get a child to sit and watch, they’re learning.”

As he got older, he found he couldn’t bend over or get onto his knees so easily. So around 2000, he thought he’d start doing buildings. He proceeded by trial and error: old movie theaters, a group of Irish cottages with corn-husk rooves, a replica of the Vikings’ U.S. Bank Stadium fashioned from 6500 toothpicks.

His work began to be recognized. Ripley’s offered to buy the Stadium (but low-balled him so he kept it). “Initially, my father would walk past my displays and say, “What are you doing that for?” But as the years passed, he started going through the shop giving tours. “Look what my son made here!” That would make my day. They felt really good.”

More recently, he realized that no-one to his knowledge had ever done a 3-D model of Simon Rodia’s iconic Watts Towers, by which he’d been fascinated since childhood. So five years ago he started one himself.

For the rings, he soaked reed in water and set them in place with cyanoacrylate (CA) glue. For the broken shards of pottery, he came up with the idea of cutting up soda cans with tungsten scissors, creating thousands of tiny specks of color, then gluing on each piece separately with an X-Acto blade.

Each project takes about four months and is like running a marathon: the Titanic Grand Staircase, the Twin Towers Stairway to Hope. Over the course of a thousand hours, he built an early-1900s era schoolhouse, complete with individual desks and an 88-key piano, and donated it to his grade school alma mater, St. Cornelius in Long Beach.

“People say, ‘Greg, you have such patience!’ I have no patience. That’s why I do this. It helps calm me down. I understand why people do needlepoint. It’s like therapy.”

He met his wife Dana at his 45th high school reunion. They married in 2015. He shut down his shop and moved to the Minneapolis area soon after.

He has a shop in his basement and though he’s undergoing treatment for prostate cancer, continues to work

“Every day as I get older, I just thank God that I’m still here. I always pray to Jesus that I still have one more model to make. That he’ll spare me to do another one. Cause I just love building models so much.”