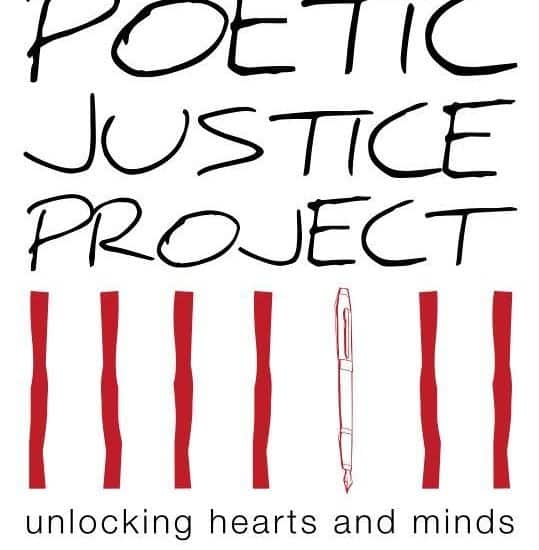 The Poetic Justice Project, based in Santa Maria, “advances social justice by engaging formerly incarcerated people in the creation of original theatre that examines crime, punishment and redemption.”

The PJP began in 2009, in conjunction with the William James Association’s Prison Arts Project.

The stats are staggering.

One in 104 American adults is behind bars.

Taxpayers pay $11 billion per year to operate the California Department of Corrections and Rehabilitation.

Our recidivism rate is its 70%—twice the national average.

“It was kind of a journey. When I taught my first poetry class, at Tehachipi in the early 90s, I went in with the typical stereotypes. I pictured walking down a dark corridor and there’d be arms sticking out from behind bars and they’d all have tattoos. In fact, the guys were very much like the college students I was teaching at the time, except they were dressed the same. And they were maybe more polite.”

The problem with the prison industry, Deborah quickly realized, was that it becomes a revolving door. Recently released inmates tend to want to isolate—which can be fatal.

She soon switched her focus to theater. In 2009, when she left full-time teaching to begin the PJP, her aim was twofold. “One, to educate people about incarceration re-entry while entertaining them, and two, to help the individual actors re-connect to their communities.”

Last summer the PJP staged a production in Santa Barbara called “Crossing the Line.” Directed by Robyn Taylor, the play is based on peace activist Dennis Apel’s account, published in a series of essays in The Santa Barbara Independent, of his four months in federal prison for protesting nuclear war and weapons at Vandenberg Air Force Base.

Dennis, a 66-year-old husband, father, and member of the Guadalupe Catholic Worker, plays himself in “Crossing the Line.” Two of the other actors are recently-released former lifers.

“On February 26, 2009, my birthday, I had reached a low point. I woke up in prison that morning with a dilemma: either gave life another chance—or end my life. I sat down and I prayed to a God I didn’t even believe in. Suddenly I felt a kind of warmth I’d never felt before. I decided I was worth one more shot. From that point on, I dedicated myself to getting out of prison. And once out, I knew I had to give back to the community.”

Brian’s character in “Crossing the Line” is named Frankie.  When Dennis enters the cell block, Frankie greets him with a menacing demand: “Are you a chomo?”—chomo being prison lingo for child molester.

The play is told through the lens of Dennis’s experiences in prison—strict racial segregation, inedible food, being thrown into the hole for over a week because a letter sent by a friend had supposedly contained traces of cocaine. But the purpose is to showcase the plight of people who spend far longer than he did behind bars. “These are human beings we lock up who have a life basically no-one should have,” he says.

Brian admits that when he first read the play he thought, “Come on, this guy served a big four months?” But afterwards he took Dennis aside and told him, “I thought you were maybe a whiner. But now I see you’ve dedicated your life to your belief system. I see four months was a long time for standing up for what you think is right. I want you to know how much I appreciate and respect you for that.”

As for those of us who were watching, the support and embrace of the crowd was palpable. The actors tell a bit of their stories in the post-show Q and A, which humanizes the event even further. Says Tobola, “By the end of the performance the audience feels ‘I am one of them. We’re all in this together.’ “

“Crossing the Line” will be staged at Loyola Marymount University on January 31, 2019. Other future productions can be found at the PJP website.

Deborah’s social justice memoir, “Hummingbird in Underworld: Teaching in Men’s Prison,” will be launched by She Writes Press in July, 2019.  “There seems to be a new commitment to rehabilitation, lawsuits, progress in general oversight,” she says. “We’ve seen some change. I’m an optimist by nature but how long is it really going to take to turn this around?”

Brian is now a Dean’s List Paralegal Studies student at Allen Hancock College with a 4.0 GPA. “I’m extremely proud of that. I used to try to drown myself in drugs and alcohol. I like Brian now.”

As for Dennis, he can still be found outside Vandenberg Air Force Base every first Wednesday of the month: carrying his sign, vigiling for peace.