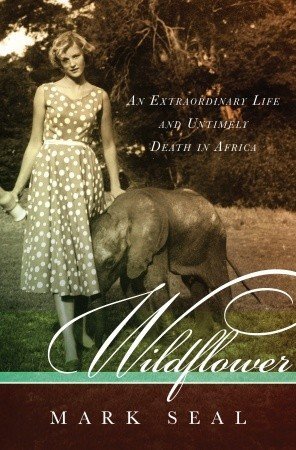 On my summer travels this year, I stopped to riffle through a sidewalk cart of used books.

There I unearthed a treasure by journalist Mark Seal: “Wildflower: An Extraordinary Life and Mysterious Death in Africa.”

In it I learned a bit of the checkered history of East Africa, and of Kenyan wildlife photographers Joan and Alan Root. Their heyday was the 60s and 70s and their films include “Mysterious Castles of Clay” (termites), “The Year of the Wildebeest,” and “Two in the Bush” (don’t miss the last ten minutes or so when the two coax a spitting cobra to fire-hose venom directly onto Joan’s eyeglasses).

I finished “Wildflower” on the plane home. This was the passage that stuck:

“One of the last films Alan and Joan Root produced together was entitled “The Legend of the Lightning Bird.” As always, she and Alan spent a year together in the bush, persistently filming the hammerkop–known as the lightning bird and regarded as the king of Africa’s birds–in its inexplicable annual ritual: building a massive and flamboyant nest, a stack of scavenged vegetation as big as a bathtub, complete with a thick thatched roof crowned by feathers, animal hooves, and sometimes even wildebeest tails, only to have the magnificent structure decimated by time and predators.”

‘Why do the hammerkops build these ridiculous nests, and why do they fly hundreds of miles and carry enormous loads to build structures that are far too large to make any sense in terms of survival value?’ asks the voice-over… Scientists say there must be some benefit gained from all of that outpouring of energy. But they cannot say just what. Others say that the lightning bird’s nest is a flamboyant gesture, a defiant challenge that overturns all our laws and theories about natural selection”

Coincidentally, the next book on my list was Richard Grant’s “Crazy River: Exploration and Folly in East Africa.”

The passage that stuck with me there concerned the people of Burundi, a tiny country which borders Rwanda, has suffered horrific “ethnic cleansing,” and is altogether one of the poorest and one of the most traumatized places on earth.

During his travels Grant met Adrien Tuyuga, “founder of a ghetto youth organization called JAMAA, a Swahili word that means ‘family,’ or, on the streets of Bujumbura, ‘very close friends.’” JAMAA’S goal was to bring Hutus and Tutsis together, console the traumatized, and convince gangsters, militia members, and child soldiers to stop the carnage.

“Adrien was hunting for new grants and new donors, convinced both that the JAMAA would rise stronger than ever and Burundi would find a better future with God’s help. I didn’t share his faith and optimism, but I was beginning to realize that the most accurate analysis is not always the most useful analysis. My habit of reading history books and twenty years as a journalist had led me to Raymond Aron‘s conclusion, that optimism is usually the effect of an intellectual error. Now I saw that in a place like Burundi optimism was a basic necessity of survival and moral behavior. I understood the surveys that consistently rated sub-Saharan Africans as the world’s most optimistic people, with the lowest rates of suicide and no word for clinical depression in most African languages. The alternative to optimism here wasn’t pessimism, but succumbing to hopelessnes and despair, and that wouldn’t feed you or your children.”

The insistence on hope and optimism as a moral stance appeals to me deeply. Our culture is increasingly appropriated by hard-eyed “realists” whose major emotion, having been granted every civil right, privilege, and material good known to man, is not gratitude, but rather outrage.

Twenty years–or twenty centuries–of history reveal that the realists have never permanently triumphed. And they never will. The hammerkop, who seemingly fruitlessly, year after year, with neither comment nor complaint, constructs his bound-to-be-destroyed flamboyant nest—emblemizes the only real triumph in this vale of tears.

So do Adrien and his fellow Burundians who plod on, invisible, unremarked-upon by the rest of the world, in order to feed themselves and their children—to do their part, in the midst of almost unimaginable suffering, to keep this crazy enterprise called humanity going.

Put another way: “Jesus said to them, ‘Have you never read in the Scriptures: “The stone that the builders rejected has become the cornerstone; this was the Lord’s doing, and it is marvelous in our eyes?” ’ ” [Matthew 21:42].

Catholicism is the religion that reveres, that in a sense kneels before, the hammerkops, the Joan Roots (who was murdered in 2006 by poachers of the African wildlife she spent her life trying to protect), and the Adrien Tuyugas of this world.

May our “inexplicable rituals,” our insane striving for meaning and beauty, our bizarre drive to construct glorious nests of wildebeest tails and bird feathers that we know the predators will one day plunder, continue.

And thank God for Mark Seal and Richard Grant, hammerkops in their own right as all good writers are. They have nourished my summer.

No comments yet
JOAN AND ALAN ROOT