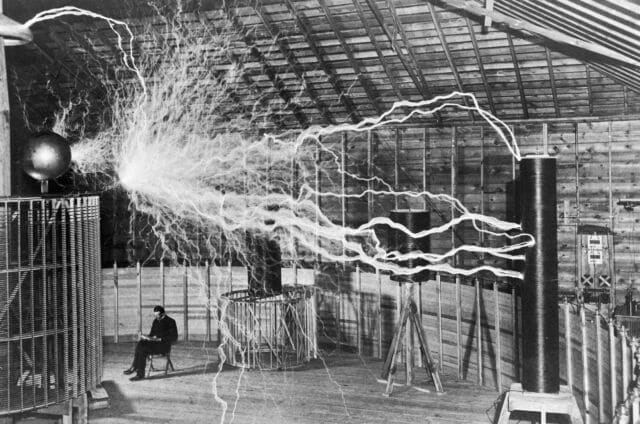 That would be Nikola Tesla (1856-1943), Serbian-American inventor, electrical engineer, and eccentric known principally as the developer of the modern alternating current electricity supply system.

Tesla claimed to have been born during a lightning storm, and as a child had vivid nightmares. His father, an Eastern Orthodox priest, wanted Nikola to follow in his foot-steps, but eventually relented and allowed the boy to pursue engineering studies.

He emigrated to the U.S. in 1884 and found work for a time with Thomas Edison. designing direct current generators.

The two, famously, were not entirely simpatico. Tesla wrote of their time together: “We experimented day and night, holidays not excepted…He had no hobby, cared for no sport or amusement of any kind and lived in utter disregard of the most elementary rules of hygiene. There can be no doubt that, if he had not married later a woman of exceptional intelligence, who made it the one object of her life to preserve him, he would have died many years ago from consequences of sheer neglect.”

He then quit to pursue his own project: the alternating current induction motor.

Tesla’s dream was to provide free wireless electricity to one and all.

He had grand ideas and cosmic thoughts: on man’s human destiny, the Rotary Magnetic Field, world peace, Divine Power, and other inventors (he considered Einstein’s work on relativity shot through with “underlying errors”).

“Everything is the sun,” he observed, and “[C]an anyone doubt to-day that all the millions of individuals and all the innumerable types and characters constitute an entity, a unit? Though free to think and act, we are held together, like the stars in the firmament, with ties inseparable. These ties cannot be seen, but we can feel them.”

In his heyday, Tesla was a dapper dresser and a showman, delivering flamboyant lectures.

In later years he developed OCD, and became obsessed, among other things, with avoiding doctors and the number three. He lived in a series of Manhattan hotels, feeding birds from the window, and developed a special relationship with one injured white pigeon, a female who he loved “as a man loves a woman, and she loved me. As long as I had her, there was a purpose to my life.”

He developed a super-weapon, called the teleforce or Death Ray whose purpose was to end all war and that he pitched to the FBI.

He died penniless, alone in his hotel room, on January 7, 1943 at the age of 86. A maid discovered his body two days later.

His funeral service took place at Manhattan’s St. John the Divine Cathedral.
His ashes, contained in a gold sphere (his favorite geometric shape), are on display in a museum in his home country of Serbia. The Serbian Orthodox Church has for several years lobbied for the interral of his remains at St. Sava’s Cathedral in Belgrade.

Today his inventions—which touch upon the areas of X-rays, remote control, and radio—are widely agreed to have changed the course of science. The global power grid is based on the AC system he championed.

Billionaire Elon Musk, “product architect” of Tesla, Inc., has named an electric car after the man who observed, “Money does not represent such a value as men have placed upon it. All my money has been invested into experiments with which I have made new discoveries enabling mankind to have a little easier life.”

And at LA’s Griffith Park Observatory, every hour or so you can see a free demonstration of the Tesla Coil. Patented in 1891, the invention is based on the idea that the Earth itself is a magnet and generates electricity at extraordinarily high voltages through thin air

A few Sundays ago I joined the hordes of tourists, streaming towards the main building, who had clearly come from the world over. Inside, the crowd pressed against the little glass-walled alcove, maybe 8 feet wide, behind which the Tesla Coil sat: a tapering cylindrical column topped by what looked like a featureless head.

At the appointed time bolts of crackling lightning appeared to shoot from both of the “head’s” ears, creating satisfying zapping sounds and a thrilling Bride-of-Frankenstein effect. Then the multi-colored neon-rimmed letters spelling T-E-S-L-A C-O-I-L along the bottom of the booth lit up—note, no wires!

Five minutes later, the show was over.

There’s lots more to see at the Observatory: the Planetarium, the East Terrace and Parapet Promenade, the Camera Obscura, the Ahmanson Hall of the Sky.

For my own part, I had to leave in time to hit 5 o’clock Mass.

I made my way on foot down the hill among people from many parts of the earth, speaking many different languages: each of us drawn by the mystery of faraway stars, celestial light and lovely summer afternoons.

As Tesla observed: “We are all one.”

One Reply to “THE (NIKOLA) TESLA COIL”