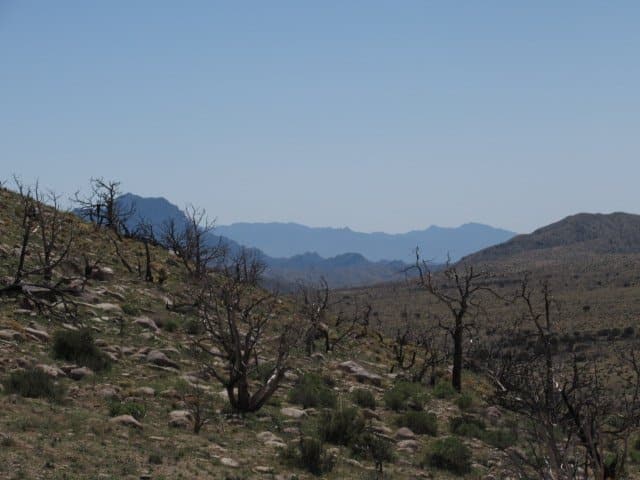 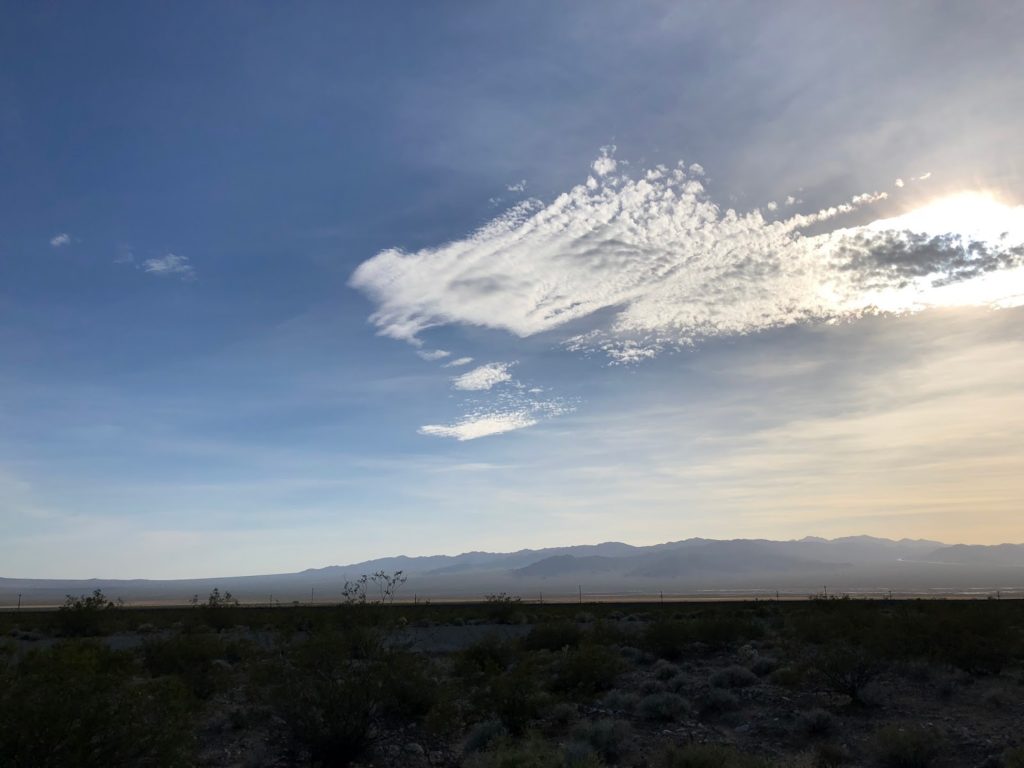 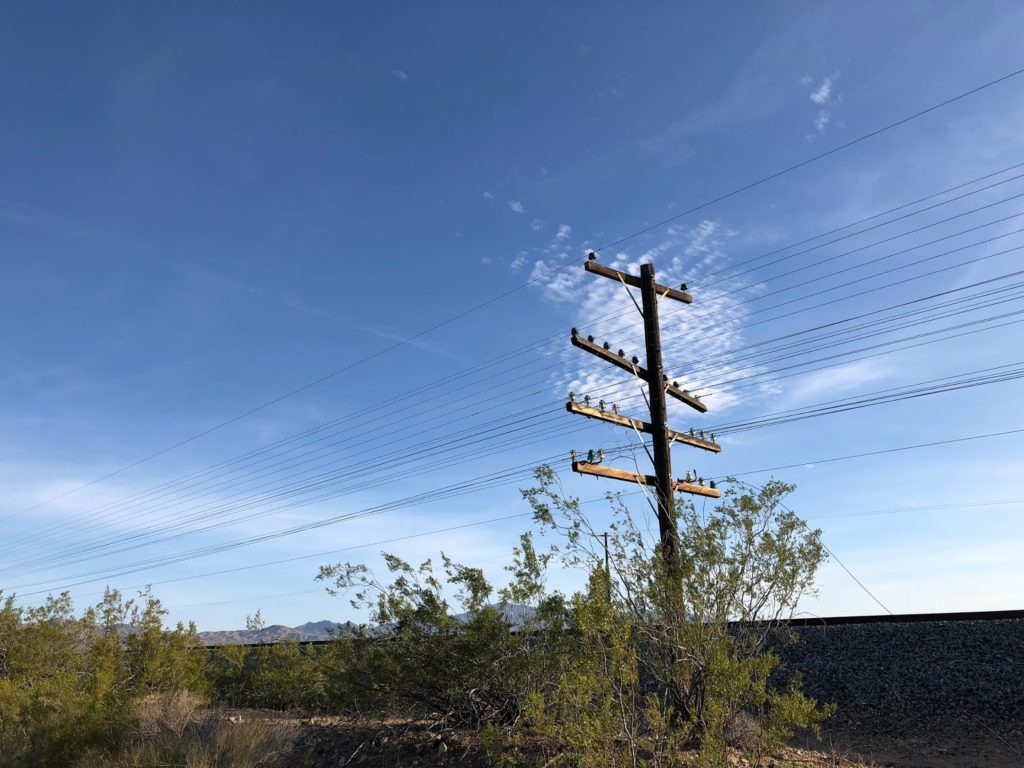 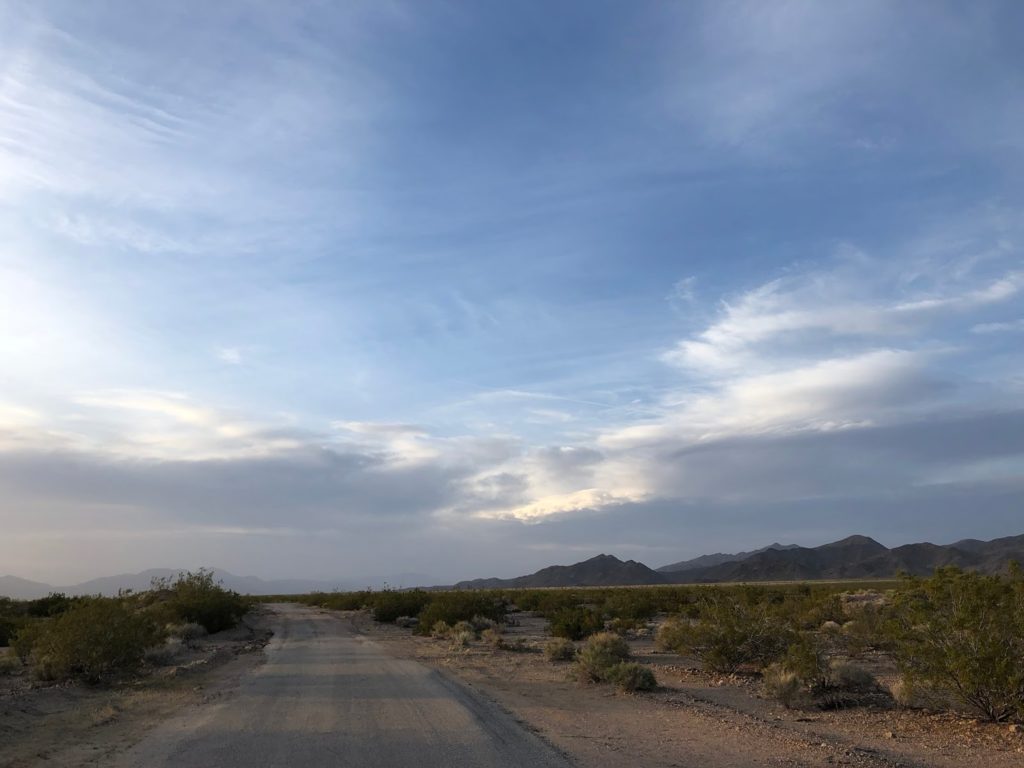 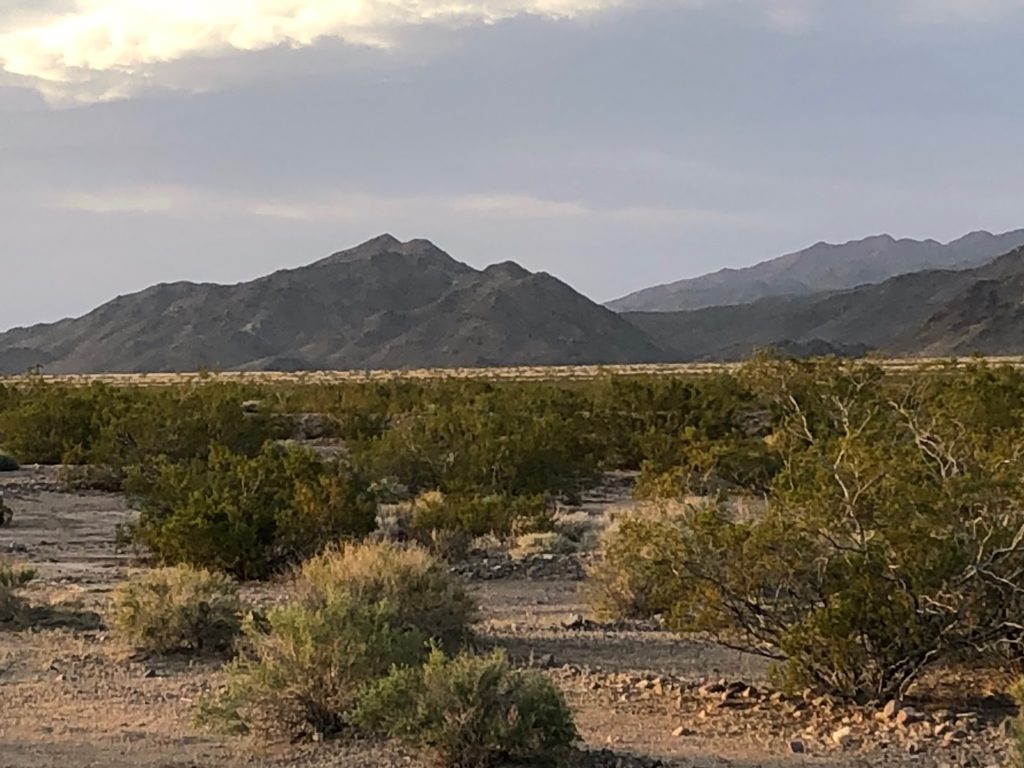 You motor up the 15, jump off at Baker and, instead of heading west for Death Valley, turn east instead.

It’s free. No permit is required. And you’re very much on your own. After leaving the freeway, I drove the whole 34 miles to the Kelso Depot without meeting a single other car.

Somewhere along the way, my cell reception petered out.

And when I arrived, the Visitor Center was closed (it’s only open Thursdays through Mondays).

Luckily, I’d brought along my trusty California Thomas Guide. Plus a friendly couple who’d stopped to use the restroom reminded me that there are only five or six major paved roads through the park so it’s pretty hard to get lost.

Right away, what with the open space and the silence, my senses were sharpened. I noted the filigree shadow cast by a verbena, the tracks of insects and lizards, the clouds, the light.

At the 45 square-mile Kelso Dunes, I ate lunch from my cooler and set out for a little stroll. If my quarter-mile slog through the sand was any indication, the three-mile roundtrip trail to the top would take about 10 hours. Still, the views are apparently stupendous. Bring plenty of water.

This East Mojave trip wasn’t my first. In the mid-90’s, my ex-husband and I had several times visited the Preserve. We’d pitched our tent at both of the two major campgrounds. We’d hiked, watched the sunsets, exclaimed at the colors: chartreuse and azure blue, misted with gold.

On the trail from Mid-Hills, we’d stumbled upon what was enshrined in my memory as the most spectacular stretch of blooming cactus and wildflowers I’d ever seen.

We’d visited Mitchell Caverns and I’d brought home a brochure about old-school desert botanist Mary Beal (1878-1964) that I’d saved for years. Mary had come West on the advice of a doctor for her asthma, taken up residence in a rustic cabin, and spent the rest of her life going about on a burro and collecting native plant specimens.

Today we have Kim Stringfellow who heads up The Mojave Project: “an experimental transmedia documentary initiative by exploring the physical, geological and cultural landscape of the Mojave Desert.”

But it was the loner botanist Mary Beal who captured my imagination. Unlike many better-known female desert rats of her day, she was unmarried and lived far from any city. Between 1939 and 1953, she contributed 56 plant profiles to Desert Magazine. She was self-taught, had a sense of humor, and was indefatigable in her search for and lively descriptions of unknown native species.

She was just the kind of woman I admire. She hadn’t harbored any such ridiculous notion as that the world was holding her back. She’d forged her own way, pursued her passion as a labor of love without special validation or thanks, and left the world a more beautiful and better place.

The main reason I had saved that brochure, in fact, was that Mary Beal, the way I remembered it, had waited twenty-nine years for one particular cactus to bloom.

A lot had changed since the mid-90’s. There’s no lodging within the Preserve itself. Nipton, the town where we’d once stayed, had just been bought (for $5 million; the whole town!) by American Green, a medical marijuana company.

The hotel had tiny rooms with no desk, no chair, no wifi, bathrooms down the hall, and a porch on which other guests, visitors, and townsfolk hung out from 7 am on. The train still rumbled by, blasting its mournful horn, almost hourly around the clock, but this I kind of liked.

Plus the air was like velvet and the stars shone bright.

When I drove to the Mid-Hills Trailhead the next day, the landscape looked a tad bleak. That was when I discovered that the Preserve had been devastated in 2005 by a 70,000 acre-burn called the Hackberry Complex Fires

Wildflowers were few, but no matter. I had a gorgeous hike, with cactus wrens and lizards for. An hour in I left the trail for a moment, seemingly by chance, and came upon a single spectacular scarlet bloom, a stab of color so brilliant it could have been a drop of Christ’s blood.

Later I reflected that to “wait” for a cactus to bloom really means to live in hope Like Mary Beal. I, too, had “waited” many years.

And when I was safely back in Pasadena, the minor discomfort, the depredations of the wildfires, the gale-force winds on the 15 South had already faded.

I would have made the whole trip again, in an instant, for that one scarlet bloom. 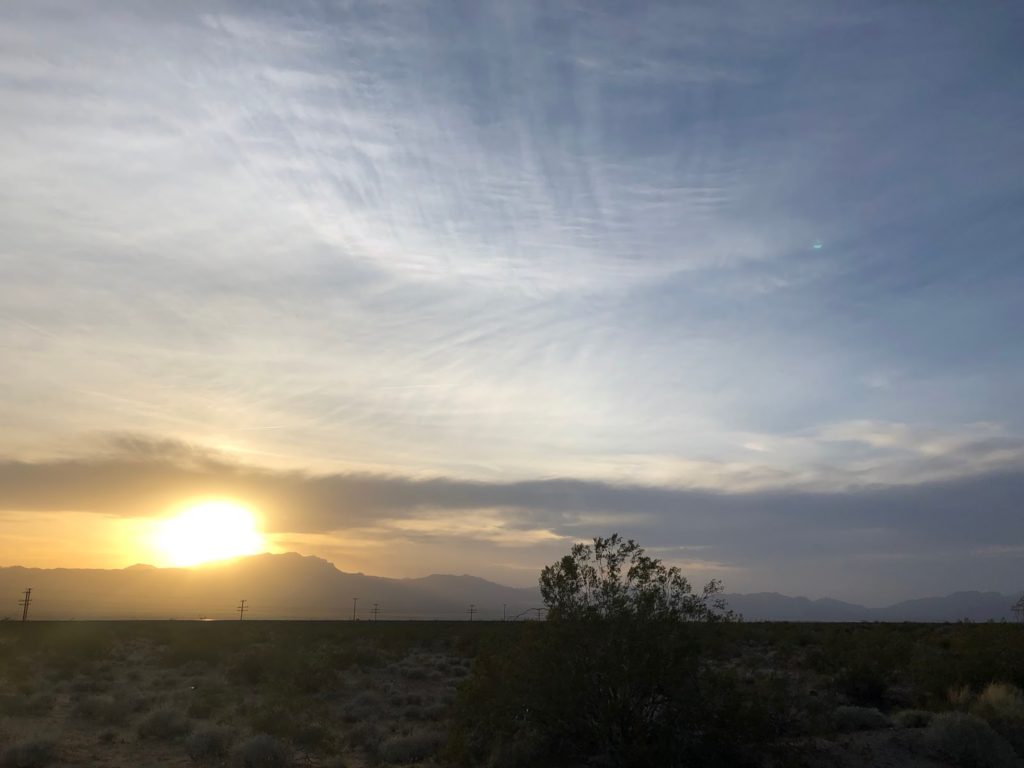 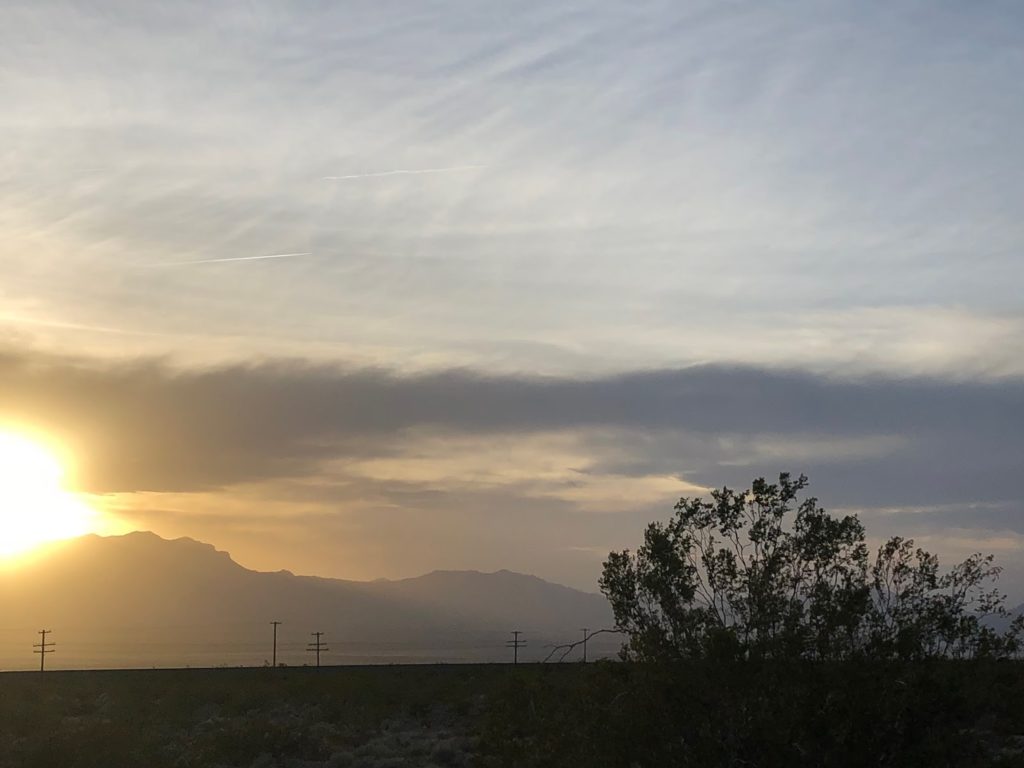 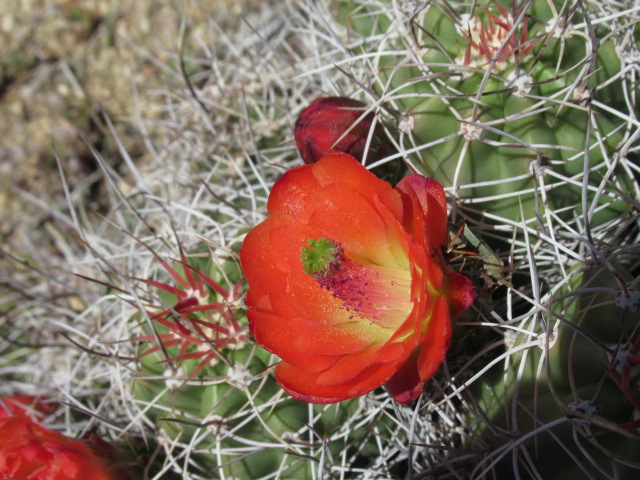 No comments yet
MARY BEAL THE MOJAVE NATIONAL PRESERVE