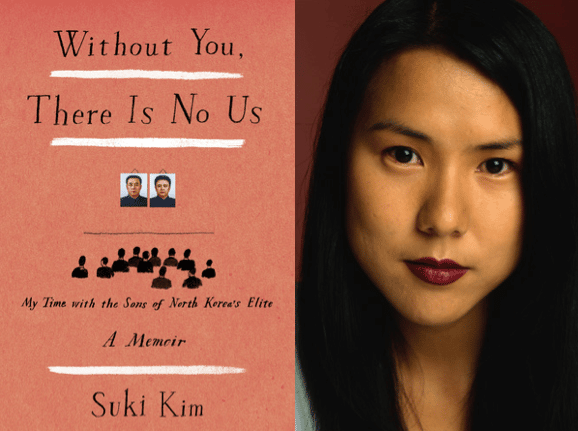 Suki Kim was born in South Korea to parents whose family had been separated by the Korean War. In the early 80s her father, a successful businessman, suffered a sudden financial reverse and went bankrupt, a “crime” that could have drawn prison time. She was woken in the middle of the night, shuttled off to a relative’s house in a faraway city, and did not see her parents for a year.

They were re-united at New York’s JFK Airport. The family was now poor. And the 13-year-old girl knew not a word of English.

Which makes her memoir of her time undercover in North Korea, teaching ESL to 270 young males at a Christian evangelical school, all the more astounding. For in addition to being a gripping “insider” story, her work is a literary tour de force: lyrical, nuanced, and haunting.

North Korea, she observes elsewhere, is a “gulag nation,” “perhaps the darkest place in the world. The country lacks electricity; everything is gray and monotone, and the only light is given to the Great Leader, an authoritarian, godlike persona now worn for the third generation by thirty-three-year-old Kim Jong Un, who is considered the sun, though that sun exudes no warmth for its people. No other contemporary country is so entirely devoid of light.”

She was not really a missionary, nor a Christian. She was watched 24/7 by minders who lived directly below her dorm room. Her classes were recorded and reported on. Every lesson plan had to be vetted and pre-approved by the “counterparts:” internal censors and spies.

On choreographed outings, she catches glimpses of “ordinary” citizens: hollow-eyed, emaciated, squatting by the empty roads. Her students are the children of the upper echelon elite. But they, too, are virtual slaves: separated from family, forbidden to own cell phones and from accessing the Internet, assigned to schools, stints in the army, careers.

Her goal is to gently jog the students into realizing that they are trapped in a ghastly lie. She has to proceed in such a way that nothing overtly incriminating can be pinned on her and, more importantly, on her students.

One of the most telling passages in the book occurs half-way through when she is leaving for the summer. “Teacher, we come and see you off,” the students said repeatedly the day before, though they all knew they wouldn’t be allowed to. The students were, however, allowed to join Kim and the other teachers after dinner for half an hour in the cafeteria. They staged skits and sang songs together. As the time drew to a close, “[T]he students became visibly tense. Some of the boys made eye contact with me and did not look away; that was all they could do. When nothing can be expressed openly, you become quite good at interpreting silence. And I read theirs as they read mine.”

What they read, of course, was love: the “unrequited love” of the anguished longing for reunification that burns in the heart of every Korean of a certain age; her love for her students that drove her to continue risking her life; their love, in a country where love is dangerous, for her.

In “Land of Darkness,” a kind of coda that appeared in the Summer, 2017 issue of Lapham’s Quarterly, Kim reveals her impatience with those who ask, “So are all North Koreans brain-washed, or do they really believe in the Great Leader?” We human beings, she observes, can simultaneously both be afraid and not afraid; can both believe and not believe.

In North Korea, where people are liquidated without warning, Kim in one way was afraid all the time. She kept the notes that would become “Without You, There Is No Me” on USB sticks that she wore at all times on a pendant around her neck, and that she was terrified would fly loose one day while she was jogging.

But in another way, she was not afraid—or at least not so afraid that she couldn’t move forward with her seemingly futile mission—part of which was to show that North Koreans, at heart are no different than you or me.

Safely back in New York, Kim still sleeps badly. She avoids the news. She dreads deadlines. She imagines the Great Leader will somehow track her down and find her.

She does not, perhaps cannot, believe in God. But as is so often the case, the atheist is a better Catholic than many of us Catholics.

“I did not count on caring so much for my students, but I did, and that consequence was afforded to me by my own blind spot.”

Without her, and people like her, there is no us.