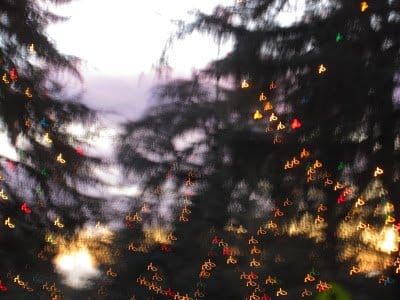 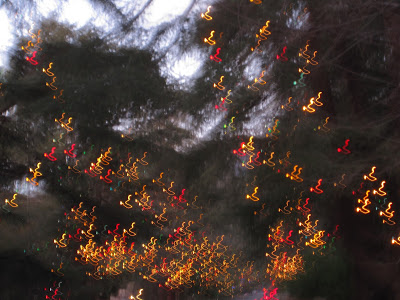 Christmas Tree Lane in Altadena, known for the rest of the year as Santa Rosa Avenue, is a Southern California holiday tradition. The approximately .7 mile stretch, between Woodbury Avenue and Altadena Drive, is lined on both sides by Deodar Cedars (Cedrus deodara) that, during December, are festooned with over 10,000 lights. Its association claims it as the oldest large-scale Christmas lighting spectacle in the U.S.

Santa Rosa Avenue was the former driveway of brothers Frederick and John Woodbury who, in 1880, bought 937 acres in the scenic San Gabriel Foothills, named the parcel Woodbury Ranch, and founded what is now the unincorporated area known as Altadena.

The trees were originally grown from seed brought back by John Woodbury after a trip to Italy. In 1885, ranch superintendent Tony Hoag oversaw the original planting of the 3-foot saplings.

In 1920, local merchant Fred Nash was inspired, with the help of the Pasadena Kiwanis Club, to drape the deodar branches with colored electric Christmas lights: white, red green, blue.

Every year thereafter until his death in the mid-1940s, Hoag showed up for the annual ceremony and had the honor of throwing the switch to light the trees.

Deodars can reach 70 feet high and have a life expectancy of around 100 years. The recent drought took its toll. As of 2016, Tony Ward, Lane foreman since 1971, reported that 26 out of the 150 trees were at risk and three were so stressed that they were in danger of dying.

An army of volunteers, many of them schoolkids, showed up every Saturday from 8 to noon for several weeks. The group went to extraordinary lengths, installing sandbags, dry wells on 78 of the trees, and an innovative irrigation system.

While last year’s rains officially ended the drought, many of the trees are still fragile. The dreaded bark beetle is another foe.

All the more reason to honor and protect the trees’ legacy.

The Lane, an all-volunteer community effort, is now in its 97th year. It has been named to the National Register of Historic Places and designated a California Landmark.

This year’s tree-lighting ceremony took place on December 9. The cedars will be illuminated through New Year’s Night, and lit again, for one night, on the Feast of the Epiphany, January 6.

When the drive was originally built, ditches were dug on either side of the lane and filled with rock brought in by mile from nearby Rubio Canyon. Today, most people cruise through in cars—in a typical year, 50,000 of them.

But if you prefer to walk the Lane, as I do, you can still stumble along below street level, savoring the brisk night air and marveling at the colonnade of impossibly tall trees, festooned with lights and stretching as far as the eye can see.

Doing so, my mind wanders back to childhood Decembers on the coast of New Hampshire. Christmas Eve the whole family—there were eight of us kids—trooped across Post Road to the Congregational church.

Even then, the pageant gripped my imagination. the pitch-black winter sky, the tall windows hung with plain evergreen wreaths, the tray of skinny white candles in the vestibule from which to choose one.

Even then, my heart thrilled to the liturgy; “In those days, a decree went out from Caesar Augustus”…”There was no room for them at the inn”….”And Mary wrapped him in swaddling clothes and laid him in a manger.”

At last, the sanctuary was darkened and down the pews the candles were dipped, each to the next person, and lit. Then we raised them aloft, a hundred tiny stars, and with one voice, sang “Silent Night.” All is calm. All is bright. Rest in heavenly peace.

Both my parents are gone now, and one of my sisters, but the decades haven’t dimmed those hallowed memories one tiny bit. The hush. The surge, if only for a moment, of charity.

The shock of frigid air as we emerged from the church. Back home, the pine logs crackling in the fireplace, my father’s fish chowder, the bickering, the wisecracks, the jockeying for the best spot on the couch to watch “A Christmas Carol” or “It’s a Wonderful Life.”

The halcyon years when someone would go to the window, look out past the front door light, and announce, “It’s snowing!”

Little was I acquainted at the time with the Gospel verse: “You did not choose me: I chose you.” Little did I know that my “Silent Night” would one day be sung thousands of miles away, in a land where Christmas is never white.

Little did I imagine that at 65, I’d be stumbling along a ditch in Southern California—weeping in exultation that every December 25 the world still has the impulse to climb a tree, light a candle, gather around the cradle of a baby.

So set aside a night this year to visit Christmas Tree Lane.

Re-visit some old ones.

O Night Divine. The night when Christ was born. 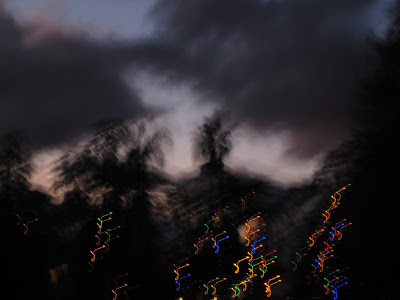