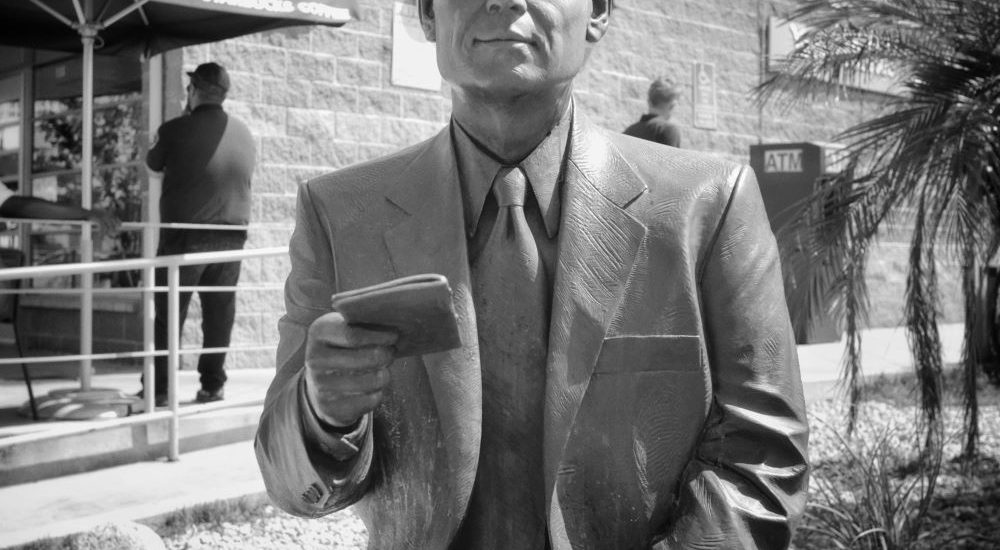 Here’s my arts and culture column from this week’s Angelus News:

On a busy corner of downtown’s Central Avenue, we also have a sculpture of a modest man whose achievement, in its way, was perhaps greater than those represented by all those other monuments combined.

Chiune (Sempo) Sugihara (1900-1986) was known as the Japanese Schindler. By most accounts, he helped 6000 or more Jews to escape the Holocaust.

In this day when the title “activist” is often claimed by those siting in air-conditioned offices firing off FB rants, it’s instructive to consider the risks undertaken by a real activist.

Sughira was born to a middle-class family in Kozuchi Town, Mugi District, now known as Mino City in Gifu Prefecture. As a young diplomat in Manchuria, he married for the first time and converted to Christianity in the Russian Orthodox Church. He divorced his wife in 1935. That same year, he quit his post in protest over the Japanese maltreatment of the native Chinese.

After returning to Japan, he married again. He and his wife Yukiko would go on to have four sons and stay married for 50 years.

In August, 1940, at the beginning of WWII, in his diplomatic capacity as Japanese vice-consul, Sugihara was stationed with his family in Kaunas, Lithuania. He was fluent in Russian from his time in Manchuria. His duties included providing Japan with intelligence on the movement of Soviet and German troops in the Baltic region.

As Russian troops invaded, Jews from both Lithuania and Poland began to seek exit visas. Soviet secret police starting rounding people up. Stories of Nazi atrocities were circulating. Increasingly desperate, Jewish individuals and families were literally storming the gates of the consulate.

Rules governing the movement of refugees at the time were complicated; suffice it to say that a visa for travel through Japan was a lifeline. Three times Sugihara appealed to the Japanese government; three times they replied firmly: Absolutely no visas are to be issued for travel through Japan unless the applicants have sufficient funds and a third country as their final destination.

Should he defy the orders of his government and risk his career, livelihood, freedom, and future, as well as put his family in jeopardy? Or should he obey his conscience?

“Chiune always went his own way,” his wife once observed. Together, they decided upon their course of action.

During the period from July 31 to August 28, 1940, the two of them hand-wrote visas for hours each day, as many as they could. Sugihara issued visas for those with incomplete paperwork, no money, and eventually for some with no travel documents at all. Legend has it that as his train pulled out for Berlin on September 1, he was still signing his name to visas and throwing them out the window.

From March, 1941 through 1944, Sugihara was reassigned first to East Prussia, then to Prague, then to Bucharest. When Soviet troops invaded Romania in 1944, the whole family was held in a prisoner-of-war camp for eighteen months. In 1946, they were released and returned to Japan.

Shortly afterwards, his youngest son died. He was also asked by the Japanese foreign office to resign his post, ostensibly due to downsizing, though he and Yukiko always sensed the real reason was his Lithuanian visa-granting. He supported his family from thereon in with odd jobs, and remained virtually anonymous and unheralded.

Eventually, though, some of those to whom Sugihara had granted visas re-surfaced. In 1985, the year before he died, he was named by the State of Israel as one of the “Righteous Among the Nations,” the only Japanese national to have been so honored.

Parks, streets, museums and an asteroid are now named after him.

And at 192 S. Central Avenue in our own Little Tokyo we have Ramon G. Velazco’s bronze sculpture: “Chiune Sugihara Memorial, Hero of the Holocaust” (2002). (Though a brilliant, and apparently prolific, sculptor, Velazco seems to keep almost as low a profile as Sugihara did during his life).

In jacket, tie and polished shoes, Sugihara sits placidly—rain, shine, day, darkest night—on one end of a concrete bench. His left hand rests easily on his left leg. His right extends a visa to all who pass by.

You can sit on the bench beside him, touch him, thank him, have a little conversation. You can ask him to pray for our current administration, so intent on withholding, rather than extending, visas to those in need.

A plaque embedded into a nearby rock includes a line of text from the Talmud: “He who saves one life, saves the entire world.”

“You want to know about my motivation, don’t you?” Sugihara once told an interviewer. “Well. It is the kind of sentiments anyone would have when he actually sees refugees face to face, begging with tears in their eyes.”

“I do it just because I have pity on the people. They want to get out so I let them have the visas.”

One Reply to “VISAS AND VIRTUE: THE HEROISM OF CHIUNE SUGIHARA”