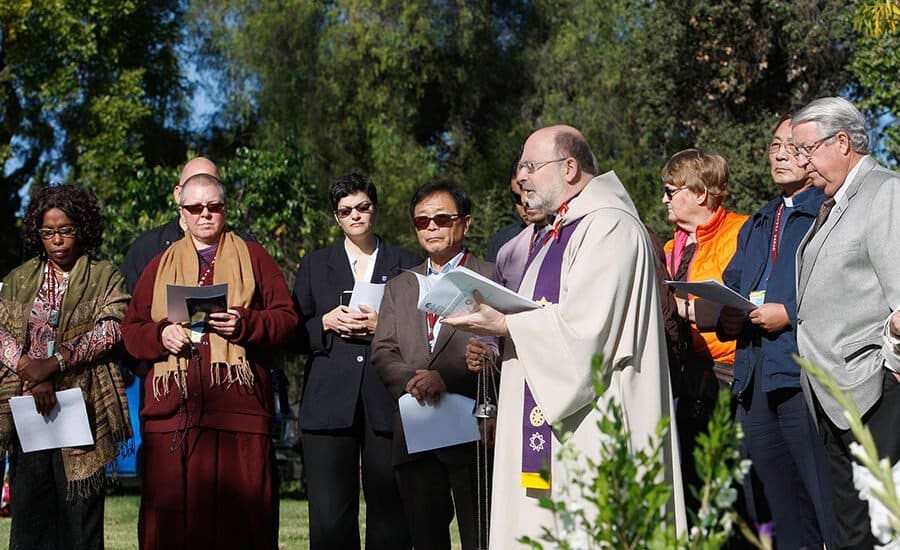 Every year, around the beginning of December, always on a Wednesday, LA County holds a burial of the unclaimed dead.

The address is 3301 1st Street, adjacent to the Evergreen Cemetery. The event is open to the public.

The date of this year’s service will be December 6, at 10 a.m. Last year’s, which I attended, took place on November 30.

I’d arranged to meet a couple of friends there and parked a few blocks away. Along the cemetery side of 1st St., starlings pecked at a patch of sere Bermuda grass. A mourning dove sat vigil on a grave marker. A pair of California quails. oblivious to death, flirted.

The main building is a crematorium, topped by rusting smokestacks. Attached iss a west-facing chapel with bare-bones décor: a concrete floor, 10 or 12 battered wooden pews, up front a token black casket backed by a podium holding a Dickensian ledger: The County of Los Angeles Register of Cremations.

The entries went back several years and, amazingly in this day and age, are handwritten. My eyes ranged down the columns: Name, sex, race, dob, date of death, place of death, date of permit to cremate, date of cremation.

Then there were the street addresses: Magnolia Boulevard (Burbank), Electric Avenue (Venice Beach), Fedora Street (Koreatown). Apartments or houses or sidewalks or abandoned lots all over our city where someone died, and nobody much noticed.

The notations under “Race” were a map of our people: Mex A., Cauc, black, Asian, A.A. (African-American?), unk (unknown).

Many of the women wore hats. Many of the guys wore suits. Many of us wore black. Photographers, documentarians, and microphones abounded.

A series of turquoise tablecloths were laid on the ground in a square around the freshly-dug single mass grave. Banked with gladioli, carnations, and mums, this was the resting place for the cremated remains of the 1430 residents of LA who died, and whose remains were unclaimed, from 2013. (The County holds the remains for three years; thus 2016’s service was for the burial of the unclaimed dead from 2013).

Babies, the elderly, the homeless, the mentally ill, the unlucky, the resourceless.

Fr .Christ Ponnet, chaplain at County General, led the service. “We trust that they live in a new place—a place of peace,” he observed.

A rabbi read a Jewish prayer: “God full of compassion…grant perfect rest…to shine brightly in the firmament…eternal home…may they rest in peace.”

A woman in Native American garb, Ms. Raquel Salinas, stood in the middle, burned a smudge of sage, and read a Native American prayer: “Thank you for the beauty of the plant life…for our ancestors…the four directions…the rest, the yellow, the black, the white, we people who walk together…the earth, the water, the air that we breathe the hearts that beat.”

There was a Buddhist chant, a Hindu chant, and a reading from the Koran that included: “Oh God, do not cause us to go astray…oh God, forgive him and have mercy on him.”

Fr. Ponnet concluded with prayer: “Hold then in the eternal embrace…Hold us in our diversity…Hold us as we continue this great tradition that says everyone who comes to this country will be welcomed…cared for…remembered in death.”

It was the best of our collective humanity. In so many words, we were saying, “I may have passed you in the street.” We were taking a few hours out of our day to remember that each of those human beings had a mother.

The choir sang us out: “Everywhere, there is charity, there is love.”

Dying alone, being forgotten, falling through the cracks: is this not, deep down, a great fear of us mortals? One thousand four hundred and thirty of our immediate neighbors who were not sufficiently connected to another human being to have been missed.

The word “claim” comes from the Latin clamare: to call out. Thus did Lazarus, covered with sores, cry out at the gate of the rich man. Claim me. Love me. Look me—just for a moment—in the face.

4 Replies to “ALL SOULS: L.A. COUNTY’S ANNUAL BURIAL OF THE UNCLAIMED DEAD”