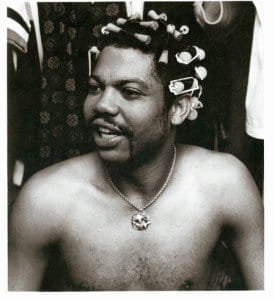 DOCK ELLIS: DID HE PITCH A NO-HITTER ON LSD?

As a New Hampshire native, my knowledge of baseball is strictly confined to the Boston Red Sox and began and ended around the Carl Yastrzemski era.

But I understand and am fascinated by the near-obsessive love that so many feel for our national sport.

Enter LA’s own Baseball Reliquary, “a nonprofit, educational organization dedicated to fostering an appreciation of American art and culture through the context of baseball history and to exploring the national pastime’s unparalleled creative possibilities.”

The collection includes such sacred objects as Dock Ellis Hair Curlers, Mother Teresa Autographed Baseballs, and the Babe Ruth Sacristy Box, out of which a priest performed the last rites.

Each third Sunday in July, the Reliquary hosts the Shrine of the Eternals, a kind of People’s Hall of Fame, and inducts three new members, chosen not so much for stellar stats as for heart crossed with eccentricity.

But this is no tongue-in-cheek lark. For all its sense of fun, the Reliquary, founded and more or less single-handedly maintained by Pasadena resident Terry Cannon, is dead serious about the importance of the sport.

In conjunction with Black History Month, for example, the Reliquary mounted an exhibition of photographs, artifacts, and artworks called “A Game of Color.” Women’s History Month featured an afternoon with trailblazing female sportswriter Lisa Nehus Saxon. “Echoes of a Past Time: Mexican American Baseball in East Los Angeles” explored the interplay of baseball with the civil, political, gender, and cultural rights of Mexican Americans. A current exhibit, “Baseball: A Global Pastime” will run at the Arcadia Public Library through October 26th.

All the work, often displayed at local libraries, is meticulously researched, sharply written, and deeply felt with an eye toward baseball’s place in the culture at large. The Reliquary also operates, almost unbelievably, on a shoestring LA County arts-grant annual budget of a few thousand dollars per year, and is very much a labor of near-insane dedication and love.

In 2015, Whittier College opened its doors and the Institute for Baseball Studies was born: the first humanities-based research center of its kind associated with a college or university in the U.S. The Institute houses the Reliquary’s research collection, is located on the third floor of the Mendenhall Building, and is open to the public 1 to 5 Fridays (Terry’s day off from his day job at the Pasadena Public Library’s Allendale branch) or by appointment.

The day I visited, Joseph (“Joe”) L. Price, Professor of Religious Studies, and the Institute’s co-founder, ushered me in. Joe has sung the national anthem for more than 125 professional baseball games, has authored several books on baseball, and teaches a course at Whittier called “Muscular Faith” that considers the sacramental aspect of sports.

Terry entered bearing a case of Cracker Jack. And though I know next to nothing about baseball, and Terry claims not to be “religious,” we met on some patch of hallowed ground common to both and talked nonstop for the next three hours.

The amount of material was staggering. Thousands of books. A recent bequest, from Richard Santillan, that comprises the single largest private collection of Dodgers material in the world. An Annie Leibovitz photo of female pitcher Ila Borders. A portrait of Hall-of-Famer Dave Winfield made entirely of tiny pieces of chewed-up bubble gum. A stack of Eddie Gaedel Holy Cards. Eddie (1925-1961) was an American with dwarfism who made a single plate appearance in the second game of a St. Louis Browns doubleheader on August 19, 1951, was walked, and thereby became the shortest player in the history of the Major Leagues. He has been designated by the Reliquary as the Patron of Those Who Play Baseball in the Face of Adversity.

After a mere hour and a half, Joe had to leave. Soon after, a small woman in a yellow Baseball Reliquary T-shirt mischievously peeked around the corner.

This turned out to be Emma Amaya, Dodgers super-fan, who fondly recalled a series of games with Houston, ending with a devastating Monday night loss, that had occurred 37 years ago. “Loge 103 N as in Nancy 3,” she added. “You remember your seat? I asked. “Well, I got my first season ticket the next year.”

She’d shown up the week before, Emma reported, toting a special bottle of holy water from the Philippines and her Eddie Gaedel holy card, hoping to end her beloved team’s losing streak. They lost anyway, but there she was, planning her next trip to Our Lady of Chavez Ravine, as she calls Dodger Stadium.

The whole time I was there, no-one looked at their phone. Baseball ignoramus status aside, I was treated like a treasured guest. When I finally left, Terry and Emma, still doing their sport proud, walked me downstairs and saw me to my car. How classy is that?

On the drive home, I thought of a God to whom story-telling and community-building and laughter and magic are so important that he died for them.

I thought of the Mother who reigns eternally from her humble seat in The Bleachers: loving all her children, but I think we can firmly take now on faith—rooting for the Dodgers.