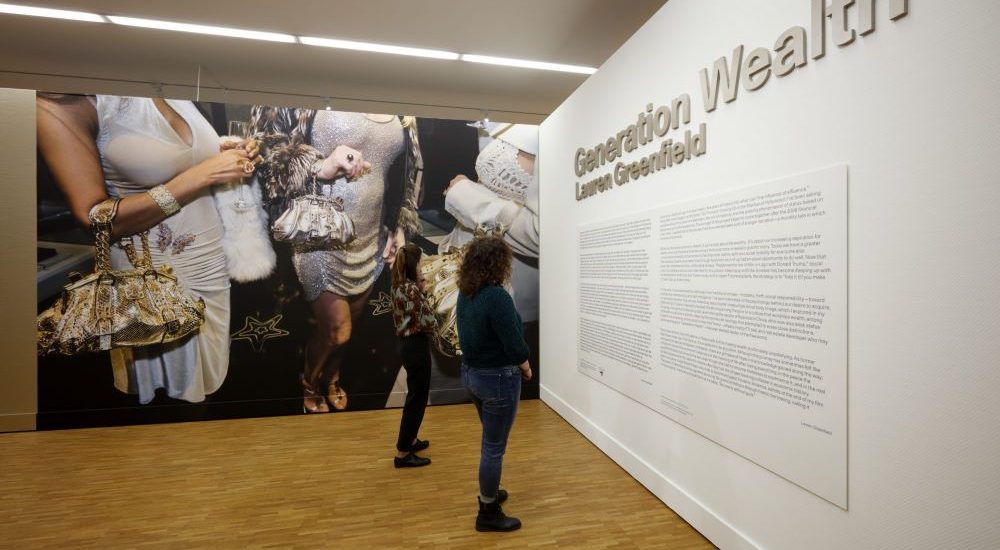 Here’s an exhibit that will make you want to go home, take a shower, and give thanks for your humble existence: “Generation Wealth” at the Annenberg Center for Photography.

“A Visual History of the Growing Obsession with Wealth That Has Come to Define a Generation” is the subtitle.

”Generation Wealth” spans two and a half decades of the work of photographer, documentarian and urban anthropologist Lauren Greenfield. (The exhibit ends August 13 but you can peruse Greenfield’s interviews, commentary, and selected photos at your leisure by visiting the exhibit’s webpage).

Greenfield grew up in Venice, “before it was gentrified.” Her mother, a professor, did cross-cultural fieldwork Mayan Indian villages. But Greenfield, fresh out of Harvard with a degree in visual anthropology, began to realize that LA’s culture of wealth, status, and bling, vis-à-vis the “American Dream,” deserved its own study.

She began to train her lens on rich high school kids: the sixty-grand bar mitzvahs, the girls who received nose jobs as graduation gifts.

We meet a Wal-mart pharmacy technician whose dream is a Disneyland Princess wedding (minimum cost, $75,000). We meet women undergoing plastic surgery, fatally bored Westside teenagers, celebrities famous not for doing anything interesting, creative, generous of spirit, or useful, but simply because they are famous.

The lack of taste, as much as the wealth, generates shudders.

But ridicule was a little too easy. In fact, I found Greenfield’s work sufficiently fascinating to have explored much of it before approaching “Generation Wealth.” Who hasn’t made an idol out of some form or property, power or prestige? Who hasn’t longed for a little sparkle? Who hasn’t fallen prey to the delusion that a new pair of sunglasses will add a little sex appeal?

Much as I wanted to judge these poor misguided souls, I knew them in my heart to be my sisters and brothers.

To Greenfield’s everlasting credit, she, too, seems to feel genuine affection for the people she portrays. She comes to her work not as a voyeur, but as a curious and sympathetic seeker: “How did we end up here?” she seems to ask. “And where do we go now?”

There are isolated flashes of insight.

“Branding wouldn’t exist if we didn’t worship it.” “Everyone bows before the [expensive hand-] bag.” Without an actual religion, the shopaholics dimly realize, we will sign ourselves up as slaves to a fake religion.

In “Thin,” a beautiful 30-year-old with two children who admits she signed on with the U.S. Air Force during Desert Storm solely in order to lose weight says simply: “I don’t know how to show love to people.”

“Queen of Versailles” is Greenfield’s 2012 documentary about billionaire couple David and Jackie Siegel, and the 90,000-square-foot monstrosity of a home they set out to build in Orlando, Florida.

Then the 2008 crash hits. Panicking, Siegel observes, “My God, the kids might have to go to college and get a job!”

This disdain for education, the making of money not from hard work or intelligence or virtue, but rather from money itself, is at the heart of Greenfield’s work.

Back at “Generation Wealth,” one nouveau riche brags, “Status is the new ‘Doctor’ in front of your name.” Another, clownish in gaudy jewelry, insists in so many words, “Everybody wants this. Anybody would give their right arm to be where I am.” Well, not really. But without a world view beyond reality TV and Instagram, how would you know?

“Satanic” may not be too strong a word to describe the delusion that money buys happiness, and the unholy lengths to which those in its grip may go. Mothers who tart up their five-year-old daughters like burlesque queens, then encourage them to strike lascivious poses for the camera. Teenagers whose highest goal in life is to become pole-dancing Vegas strippers (“If I can do that, I can do anything!”) Women isolated in their luxurious fortresses, left to wander with their equally alienated, clone-in-the-making young daughters through ginormous walk-in closets crammed with $20,000 Hermès Birkin bags.

Men are prey to the delusion, too, but as is true with all forms of spiritual poverty, women seem to bear the brunt. Our longing for beauty and love perverted, we freely offer up our bodies and souls to be prostituted, mutilated, marketed.

Two words came to mind as I watched the half-hour video accompanying the exhibit: “desperate,” and “joyless.” In the end, I felt an overwhelming sadness.

The more TV you watch, I learned, the higher income you think your neighbors have.

“There’s another way, people!” I wanted to shout as I left. “Throw away your TVs! Open your Bibles!”

I thought of the lines that had encouraged me, all those years ago, to leave my job as a Beverly Hills lawyer and start writing:

“Ho, everyone who thirsts,
come to the waters;
and you that have no money,
come, buy and eat!
Come, buy wine and milk
without money and without price.”

No comments yet
LAUREN GREENFIELD THE ANNENBERG SPACE FOR PHOTOGRAPHY