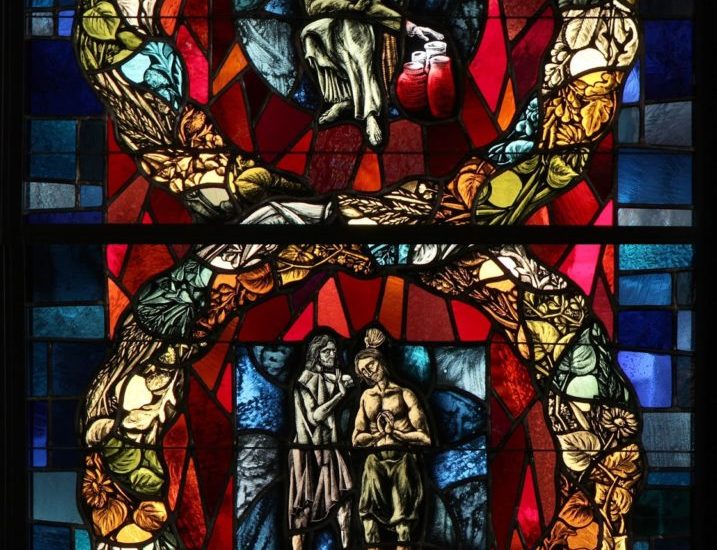 “Living with little kids like I do, when I’m designing I’m more attentive to how a little kid might perceive what’s in the church. Kids are just as if not more capable of perceiving and understanding a picture as adults are. They might not know which Bible verse the story comes from. But they get it.”

Will himself grew up the youngest of five.

“We were surrounded by original artwork. Abstract expressionist paintings, religious in content, by my maternal grandmother. And icons my parents picked up on trips to Greece. Having religious art with a family connection was deeply influential. I was formed to know that the best work comes from someone who personally feels it.”

Work should be beautiful, Will believes, in a way that “educates the emotions.” Line, form and color are meant to give delight and impart joy. But in the Catholic sense where especially, say, at a hospital, we know that beautiful is not necessarily “happy.”

“Most of my work begins with text. In the case of the liturgical art it is typically Biblical. My effort is always to depict on some level my personal contemplation, you might even call it a homily if I were a priest, on that given passage. In the case of my studio work I often enter into images through lyric poetry.”

Great care goes into each facet. For the nave of Resurrection Catholic Church in Wichita, Kansas, for example, first, Will depicted the parable of the mustard seed which grows into a huge plant and birds come and nest in its branches.

“That’s the Kingdom of God, and within that scene are three parables. The Prodigal Son in the center, the Good Samaritan on the left, and the Rich Man and the Poor Man—Lazarus at the gate—is on the right.

“The rich man has a bottle of wine and a drumstick. Priests love that drumstick.”

“As well I’ve positioned the figures so as to convey motion in the composition, between the good and the bad moral action. Those are the kind of “little” things that as the designer I’m always aware of, and doing intentionally. Whether people would pick up on that or not, it’s good catechesis.”

For St. Eugene Church in Oklahoma City, Will designed the church’s 35 Roman arched windows so as to convey the fullness of the Church: the Trinity (God the Father in the Apse, The Holy Spirit in the Dome, and Christ on the Transept), and the Saints (in the Nave).

To deeply feel the figures he’s depicting requires time and research. For the narratives of twelve saints’ lives for the lower windows of the St. Eugene Nave, for example, Will read biographies. He didn’t want to rely on Wikipedia synopses.

One of his discoveries was Catherine McCauley (1778-1841), founder of the Sisters of Mercy. “Wonderful woman! She was a Protestant from Ireland who converted. Her family cut all ties with her. So I have her kneeling and praying, separated from her uncle by a tear in the image, a red thorn. Clearly, there’s been a disruption. I think almost anyone looking at that picture would wonder, What is that?”

Another example: Fr. Stanley Rother (1935-1981), an Oklahoma native revered throughout the archdiocese who was martyred while serving in Guatemala.

“In my preliminary watercolors, I had just a quick gesture of him kneeling as he died. Fr. Donald J. Wolf, a priest at St. Eugene and a cousin of Fr. Rother, said, ‘That’s sweet, but that’s not really how it happened. He was executed. And he died fighting.’”

“That the committee had the palate to see that depicted was really powerful. So the image shows him struggling with three men who are pointing a gun at his head. You might not want that image to be forty feet high. But it’s accurate. I would think for a kid, for example, would leave a strong impression.”

Will’s materials are lead, mouth-blown glass, and metal oxide (stains). Other than in his ability to use electricity, there’s little difference between what he’s doing and the process that went into a window at Chartres.

Though our animated conversation lasted well over two hours, we still barely scratched the surface of the William Frank oeuvre. And it was only after our talk about stained glass had ended that Will—who just turned 33—revealed his true artist’s heart. .

“You’ve accomplished so much in your young life!” I told him.

“Well, thank you, but these are not my accomplishments alone! The work is truly collaborative: I heavily rely on other folks at the Frei studio for myriad aspects of my projects; and I collaborate with parish leaders.”

“Plus—you don’t see the half of it. The most I’ve accomplished are my four kids.”