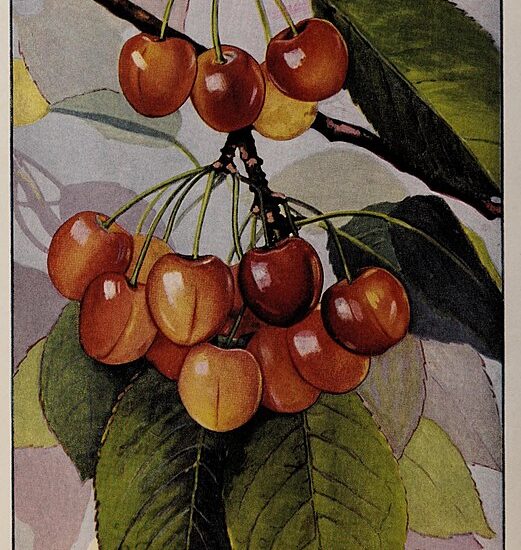 Ever since my first spring in LA, 27 years ago, my heat sings at the opening of cherry season. And every year for about the last 20, I have told myself I’m going to take a field trip and pick my own.

This year I finally did. One good place to start is the town of Leona Valley, outside Palmdale, which is a kind of cherry mecca.

Even before embarking, I could see people live in a whole other world up there. Farm stands sell local farm fresh honey and eggs. The names of the cherry varieties conjure visions of Tuscany: Tartarian, Tieton, Chelan, Lapins.

There were many orchards to choose from. One website proclaimed in bold letters: “Remember, we have a $5 per person minimum purchase and we do not allow eating the Cherries while picking in the orchard. Pick, Pay then Eat!”

I was almost tempted to visit that one just to see how the rule was enforced. Did a guy with a cattle prod wander around zapping anyone caught sneaking a stray Rainier? Did a gal in a Smokey’s hat patrol the orchard with a bullhorn, braying “You, clad weirdly in black and clutching a rosary, I saw you scarf that Bing!”

As it happened, I was lucky to get to any farm at all. Cherry growing. I was to learn, is a delicate operation, subject to any number of variables that can and often do go wildly wrong.

There are bigger orchards, offering more activities, but Cherry Hill Family Farm was just my style: 7.5 acres, 3.5 of them given over to cherries.

I went on a weekday which I strongly urge as apparently the crowds on weekends can reach stampede level.

This truly is a family operation. During the course of my visit, I was graced to meet proprietor Ali Stewart, Ali’s mother, and Ali’s three children, Tanner, 16, Ava, 12, and Owen, 10.

As soon as I arrived, Tanner gave me a white plastic bucket and pointed out the trees that were currently ripe. As of May 18, the Early Burlats were gone already, the Brooks were perfect, and the Bings were due to arrive in another week. If you yank the stem, you can damage the spur: the small twig attached to the branches from which the bunches of cherries hang. Thus they ask that pickers either leave the stems behind or cut them off with a pair of the small scissors they provide.

As I set out into the orchard, Ali explained that things change quickly on a cherry farm. The cherries ripen quickly, they’re gone quickly, and they’re prey to any number of wildcard factors.

As soon as the fruit gets its first blush, the birds come. Shot hole boring beetles hatch out in spring and can rapidly infest a tree. Gophers can burrow down and eat the tree’s whole root system. A big rainstorm could cause the trunks to split. Hail can ruin the fruit. Fog can gather and settle in vales, leading to a deadly frost.

Even now in the middle of the season, rogue weather could wreck much of the crop. “We’re not safe till the fruit’s gone and the money’s in the bank.”

The season generally runs a short three weeks, with the varieties of cherries ripening a week or so apart. Ali suggests checking the website and Facebook page for updates. Phone calls are almost impossible to answer during the season—there’s simply not enough time.

Interestingly, while Cherry Hill is usually done by Memorial Day, a mysterious combination of microclimates means that nearby farms may not even open until June 1.

As I picked, Owen ran about reporting on bird sightings and egg-laying stats. I learned that Ava, sadly, has realized she does not like cherries and would prefer a strawberry farm. Clad in Western shirt, dungarees, and cowboy boots, she reported that she contents herself with rabbit breeding and described the tragic death of a litter of seven baby rabbits who were born during a frost and perished by morning. The good news: next time around the same mother gave birth to seven other babies—who lived.

Up on the hill, there are outdoor toilets, picnic tables, sylvan views.

And oh, the cherries! Clustered, glistening, aflame with light, they fell into my greedy palm with the merest pressure.

I’d thought to wait till I got home, but driving back on traffic-clogged I-5, I devoured half the fruit I’d picked.

Cherry-picking season comes and goes in a flash of glory, and I thought of Christ on the road to Emmaus.

The disciples recognized him in the breaking of bread. Their hearts burned within them. And then he vanished from their midst.