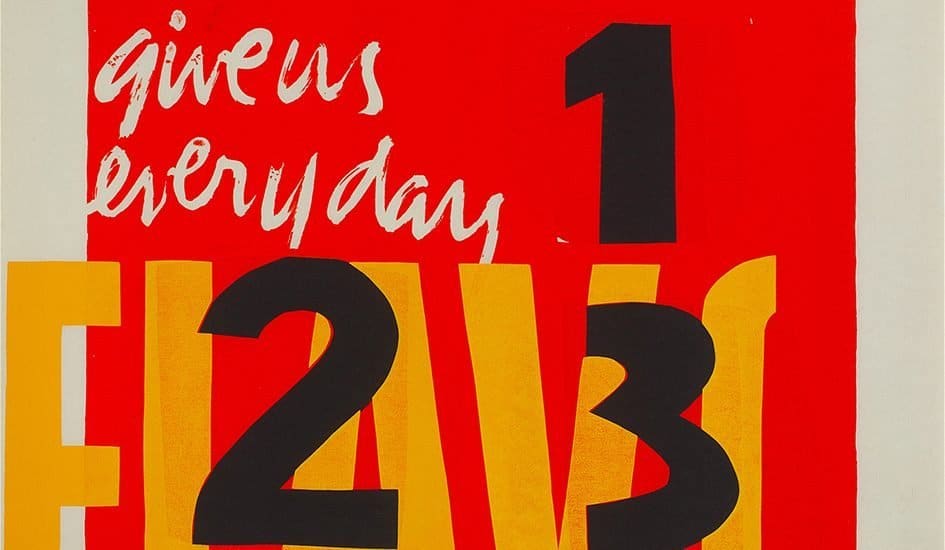 The Center for Spiritual Renewal in Montecito was founded by the Sisters of the Immaculate Heart of Mary, a community with an interesting history. Visiting there recently, I spotted a coffee table book entitled “Someday is Now: The Art of Corita Kent.”

Anyone who grew up in the New Hampshire Seacoast-Boston area, as I did, knew Sister Corita from the huge Rainbow Swash design on the gas storage tank that was visible as you whizzed by on the Southeast Expressway.

I remembered her from my youth as a zany nun. She seemed old to me then, a somewhat quaint figure who’d managed to escape what I then viewed as the straitjacket of organized religion.

In fact, the Rainbow Swash was designed on the back end of a decades-long career that included innovative teaching and social activism as well as art.

As independent curator Michael Duncan puts it in his “Someday is Now” essay, “A unique contributor to Pop Art and the generator or an effective style of socially engaged art-making, [Corita} has been rediscovered by a new generation bred on Photohop, grassroots activism, font-tweaking, and DIY publishing.”

The Kents moved to Hollywood in 1923 where Corita (as she eventually preferred to be known) took art classes at the nearby school run by the Sisters of the Immaculate Heart of Mary. She was praised for her work and, the summer after graduating from high school, studied at what is now the Otis College of Art and Design. She entered the order and took the name Sister Mary Corita in 1936. Fortuitously, that same year Sister Magdalen Mary Martin began a 28-year tenure as art department chair.

Novices were expected immediately to begin teaching parochial school children and “Sister Mag” would prove to be a decisive influence. Her ideas—that art should incorporate the element of play; that educators are those who draw-out—would guide Corita throughout her career.

Corita’s approach and sensibility are well-conveyed in her ten “Immaculate Heart College Teaching Rules,” which begin:

“Rule 1. Find a place you trust and then try trusting it for a while.

Rule 3. General Duties of a Teacher: Pull everything out of your students.

Rule 4: Consider everything an experiment.”

Corita wanted her work to be accessible and affordable. From the 1950s until her death in 1986, her primary medium was serigraphy—silkscreen printing. Finely attuned to the social and political influences of her day, she often incorporated text—from Scripture, Beat poets, Sufi mystics, advertising slogans, and song lyrics—into her serigraphs. .

She once said, “I really love the look of letters—the letters themselves become a kind of subject matter even apart from their meaning—like apples or oranges are for artists.”

In 1967, the IHM community began making certain changes in accordance with Vatican II that met with strong resistance from the LA Archdiocese. In 1968, Corita asked for dispensation from her vows, left the order and moved shortly afterward to Boston.

Here, she transitioned into a more introspective way of life. She designed the Rainbow Swash and the well-known U.S. Postage LOVE stamp during this period.

She was also diagnosed with cancer in 1974.

She collaborated with friend and former student Jan Steward to write Learning by Heart: Teachings to Free the Creative Spirit (published posthumously, in 1992).
“Pretend You Are a Microscope,” she counseled, and “Make a Movie with Your Eyes.”

In 1983, she received a commission from Physicians for Social Responsibility. She called the resulting “we can create life without war” billboards the most religious thing she had done.

The Immaculate Heart Community, still on Franklin and Western, maintains the Corita Art Center, a project that “preserves and promotes Corita Kent’s art, teaching, and passion for social justice.” You can visit weekdays from 10 to 4.

In one photo Corita stood before a class teaching: her charismatic personality shining out from beneath the wimple, her eyes twinkling with mischief.

Studying her vivid, spirit-filled prints, I found myself fervently hoping that if she left the Sisters of the Immaculate Heart of Mary, she never lost her faith.

I hoped at the last she remembered the serigraph before which I stood incorporating a passage from Psalm 60:

“Listen O God, to my cry, give heed to my prayer!…Set me high on the rock, give me rest! For you are my refuge, a strong tower against the foe: Would that I might live forever in your tent, take refuge in the shelter of your wings.”