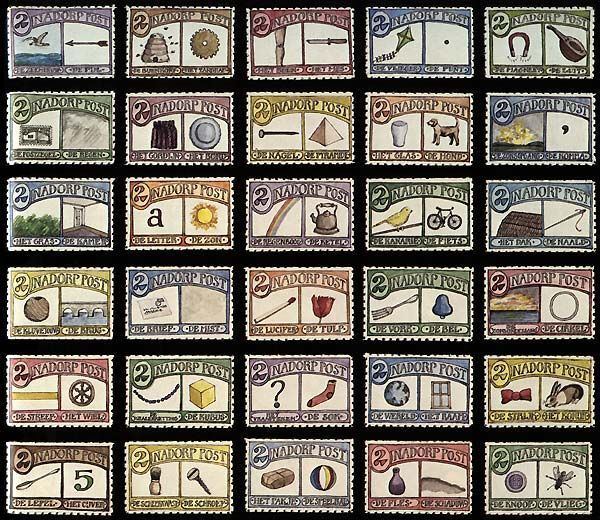 Donald Evans (1945-1977) “put his whole life and everything that interested him into the stamps of his fantasy world.” So says Willy Eisenhart, author of the wonderful “The World of Donald Evans.”

Evans was born in Morristown, New Jersey to Dorothy and Charles Evans.

An only child, he grew up in a stable, prosperous and loving middle-class family. He liked to play alone. An older neighbor introduced him to stamp collecting when he was six. He spent hours poring over the stamps, memorizing the names of the countries and capitals of the world, learning about the flags, currency, local customs, and flora and fauna of fiefdoms, dictatorships, obscure islands.

His best friend for a time was Charles Fisk, who came from old money and whose well-travelled family, Evans recalled, “had a fascinating house full of collections of things and lots of encyclopedias.” The two boys built elaborate sand castles and palaces, made maps and calendars, and invented characters. Charles’ was named Uncle Rich Harvest. Donald called his character The Queen.

When Donald was ten, he found he could render the places in his imagination “more real by making stamps from them and little letters.” He outlined the stamps in pencil, filled them in with pen and brush, and made the perforations by pummeling out rows of periods on an old typewriter.

“In five years,” writes Eisenhart, “he made a thousand stamps. He invented fifty countries to issue them—places like Frandia, Doland, Jermend, Kuntsland (East and West) Slobovia and the Western United Powers. Each had its own flag and coat of arms currency, government and rulers. Geographies and histories were intertwined with protectorates and occupations, unions and federations.”

From the beginning, Evans meticulously catalogued his work.

“He mounted and identified all the stamps in notebooks—the three-volume World Wide Stamp Album, alphabetically arranged by country. Separately he typed and illustrated leaflets modeled on real collectors’ catalogues. For instance, in his ‘A Catalog of the Stamps of Aluala, 1939-1957, he listed all the issues with their dates, denominations and colors as well as prices in Alualan pounds for mint-condition and cancelled stamps.”

At the age of fifteen he stopped, seemingly forever. He pursued typical teenage interests. He dated a cheerleader, attended football games, applied to college.

He studied art history at Cornell (his parents wanted him to be an architect), bummed around Europe for a summer, then in 1964 settled down at Cornell’s school of architecture after all.

After graduating in 1969, he joined the prestigious NYC firm of Richard Meier and Associates. Unhappy with the frenetic pace of New York life and ambivalent about his profession, he began to show the stamp books he’d compiled as a youth to friends.

The response was enthusiastic. He sold his stamp collection to his father, gave up his apartment in Brooklyn and set out for Holland , as if “in dream,” with his watercolors and a stack of pre-perforated paper. “I just left,” he told a friend, “and the world is so different and I don’t understand anything.”

From a cottage in the Dutch countryside, he drew stamps of dykes and windmills, landscapes, and imagined figures of royalty based on his friends. From a warehouse in Amsterdam, the work continued.

He traveled light and lived close to the bone, spending what little money he had on books. Eisenhart writes, “He had books on windmills and mushrooms, flowers, fruits and vegetables, old ships and planes, birds and birds’ eggs; illustrated travel books stamp catalogues and books on stamps and postal history; works of Gertrude Stein. And he had a few sea shells, a set of dominoes and a lot of library cards.”

The stamps are exquisite. Dreamy watercolors of ships, planes, mountains, and fish. Series on Middle Eastern minarets, a falcon in flight, tartan plaids, and various breeds of chickens. Symbols of the Republica de Banana include a tall black boot, a crayfish, a scorpion, and a palm tree. “Drinks of Barcentrum” was inspired by one of his favorite Amsterdam cafés.

Eventually he collected his work in one volume called “The Catalogue of the World.” He began to sell his work and to achieve a certain amount of success.

In 1975, he told the “Paris Review:” “It was vicarious travelling for me to a made-up world that I liked better than the one I was in. I’m doing that now too. No catastrophes occur. There are no generals or battles or warplanes on my stamps. The countries are innocent, peaceful, composed. Sometimes I get so concentrated in these worlds I get confused . . . it’s hard to get out.”

But in the end, a catastrophe impinged after all. On April 29, 1977, the Amsterdam apartment house where Evans lived caught fire. He died at 31, a stone’s throw from his beloved windmills and dykes.

His life was like one of his own miniature works of art: a dreamscape incorporating the banana trees, shells, and bird eggs he treasured, framed by a border of banged-out black dots, painstakingly, lovingly worked out with a Grumbacher number two brush.