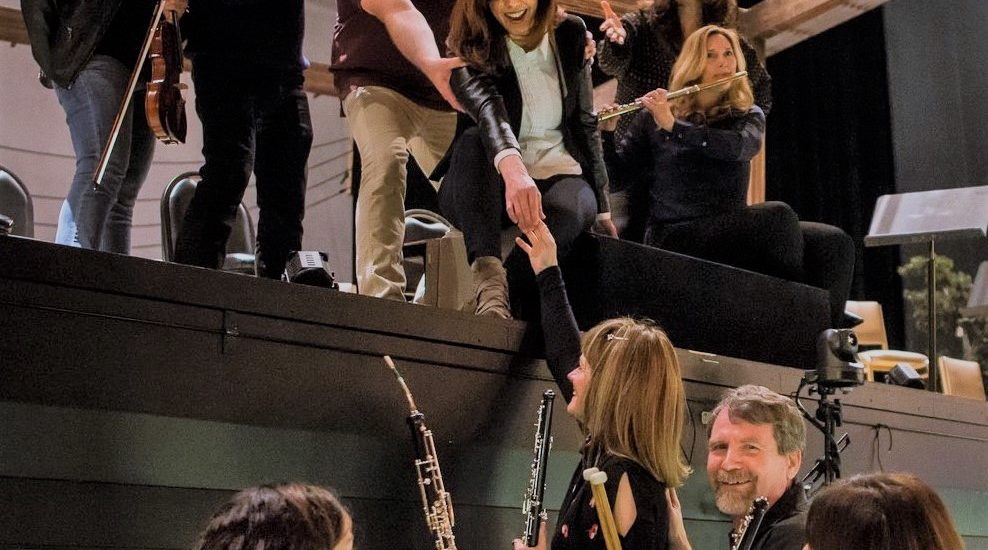 Compared to the grossest salaries,
A pittance is our fee.
But pit is where we make great art,
Where inspiration’s free.

Pittance Chamber Music comprises small ensembles of members of the LA Opera Orchestra. The name is a play on words, deriving from the pit where they play, and the “smaller” offerings they make. It’s been said that Pittance is small in the number of members, venues, audience, and ticket price. But they’re anything but small in talent.

Recently I spoke to Artistic Director Lisa Sutton, herself a violinist for both the Los Angeles Opera Orchestra and Pittance.

“The thrust behind Pittance is connection. The initial inspiration was respect and love for my extraordinary colleagues who, at the opera, are basically invisible. The audience hears this great music emanating up from the pit but they don’t see anybody and they don’t know who we are. Conversely, those of us in the pit can hear the audience buzzing but we can’t see them either.”

“We see people come and go: the great soloists, the maestros—but we’re here all the time. Over the years we’ve grown together and had families together and celebrated milestones. We’re a community. We also live and work here in LA, so we’re all residents of the community at large.”

“I thought, Wouldn’t it be fun to raise my colleagues up from the pit to the stage where they could be seen, to allow the audience to experience the beauty of the music without the pit nor the distance of a large hall separating us? Of course we also hope our visibility will encourage people to come, both to our concerts and to the opera.”

“Plus,” Sutton laughs, “what player doesn’t like to see their adoring public?”

I attended Pittance’s first offering of the season, last October 9 in the Eva and Marc Stern Grand Hall at the Dorothy Chandler Pavilion.

So civilized! The wide stairs, the thick carpeting, the well-dressed crowd, many shepherding incredibly well-behaved children. Chamber music on a Sunday afternoon. For 35 bucks. I brought a friend and we both said, “We are so lucky! Where do you get to do this?”

Sutton agrees: “That venue is special. The sound is wonderful. There’s a kind of transcendent experience that takes place with that stupendous backdrop of the city and the mountains and, overhead, those amazing chandeliers. Which by the way get cleaned once a year. They lower them down to the floor on giant ropes and workers hand-polish each little crystal. It’s the opera house, in the middle of the Wild West.”

Miguel Perez, a dashing impresario-like figure who trained as a Shakespearean actor and serves as the ensemble’s host, introduced the pieces. Thus, we learned that when Mozart composed the Clarinet Quintet in A major, he was in dire financial straits. Mozart!

“These are the interesting human elements that draw people to connect with music,” says Sutton. “What was going on at the time the composer wrote the piece? Was there war breaking out? What about his family life? That Mozart could write this divinely-inspired piece when the rest of his life was in a shambles—that to me is more interesting than a dry recitation about the allegro form.”

Pittance often invites a member of the LA Opera Chorus or the Domingo-Colburn- Stein Young Artist Program to join them.

The October concert featured soprano Summer Hassan singing “L’amerò sarò constant,” from Mozart’s “Il Re Pastore,” with great charm, great passion, and great brio. That such a sound could emanate from a mere mortal was astonishing. The little girls in their concert finery flocked to her afterward, approaching gingerly, wanting to touch the hem of her garment. That was fun to watch, too.

“It’s such a glorious voice,” Sutton adds. “After we did our concert, she went up to San Francisco and placed first in the western region of the Metropolitan Opera National Council auditions.”

For their third and final concert of the season, March 26 in Dorothy Chandler’s Founders Room, Pittance will have a singer as well: Theo Hoffman, a baritone in the opera’s Young Artist Program. That will be part of the LA Opera day-long Open House.

But for their second, upcoming February 3 concert at the Colburn School’s Zipper Hall, James Conlon, Music Director of the LA Opera, will come in to conduct two very large works: Mendelssohn Octet in E flat, and Mozart’s Serenade in B Flat No. 10 (“Gran Partita”).

“There are no violins in that one so I’ll get to sit back and listen,” says Sutton. “As a musician, when I play Mozart…I can’t explain it, but there’s a special connection.”

In the film “Amadeus,” Mozart’s rival Salieri delivers a soliloquy about the piece that wonderfully describes our desire for the infinite:

“On the page, it looked—nothing. The beginning’s simple. Almost comic. Just a pulse…And then—suddenly—high above it: an oboe. A single note, hanging there, unwavering…This was a music I’d never heard. Filled with such longing, such unfulfillable longing. It seemed to me that I was hearing the voice of God.”