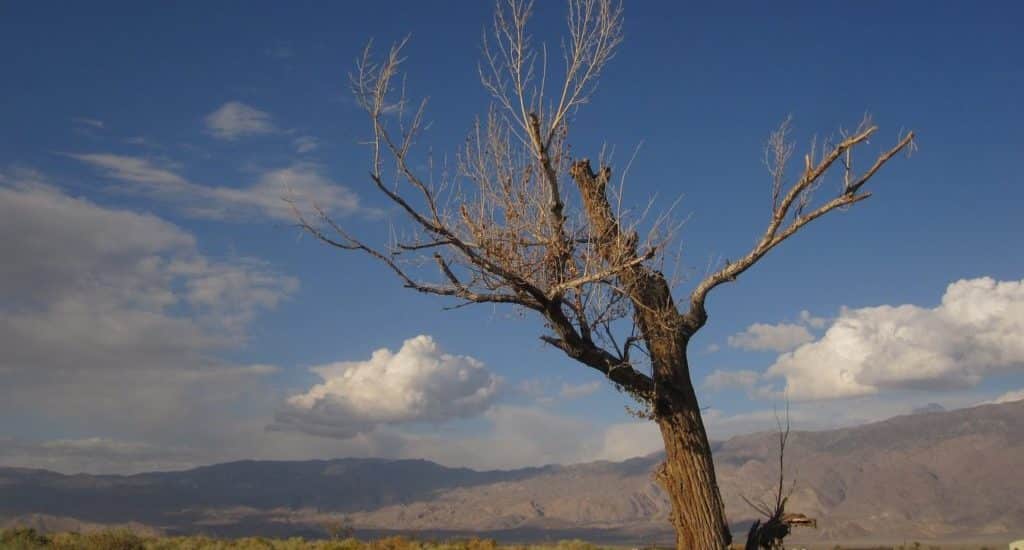 In 1942, the U.S. government ordered more than 120,000 men, women and children from their homes and detained them indefinitely in ten isolated, military-style camps they called “War Relocation Centers.”

Manzanar—a four-hour drive from LA, through the Angeles Forest, the Mojave Desert and the foothills of the Eastern Sierra Nevadas—was one of them.

In 1992, the former camp was designated the Manzanar National Historic Site. Driving in, you still pass the sentry tower where armed guards stood watch. I spent three days there in September, perusing the superbly-curated exhibits, wandering the extensive trails through abandoned blocks of barracks, praying in the derelict gardens. The contrast between the breathtaking beauty of the mountains and the misery that had been borne beneath their shadow was stark.

In the wake of the December 7, 1941, bombing of Pearl Harbor, President Franklin D. Roosevelt signed Executive Order 9066, authorizing the military to remove “any and all persons” of Japanese ancestry from the West Coast.
Notices went up giving Japanese citizens mere weeks or even days to pack up their belongings and report to be transported by armed train to internment camps.

Commercial fishermen who had been out to sea were detained as they stepped off their boats in San Pedro. U.S. citizens with no idea whether they would ever return sold their furniture and appliances for a pittance. Restaurants were closed. Pets were left behind. Prisoners were not allowed to ship personal items or household goods—they could bring only what they were able to carry.

Two-thirds of those detained were American citizens. No crimes had been committed. No trials were held. No convictions had been handed down. Manzanar represented an entire erosion of fundamental human and U.S. Constitutional rights.

In the barracks, each 20-by-25-foot room was furnished with a single bare light bulb, up to eight cots, and an oil-burning stove. “Hot in summer, bone-chilling in winter, and always, the wind,” one inmate observed. “We had no freedom, no privacy,” another remembered.

Joseph Kurihara asked, “Why didn’t the government give us a chance to prove our loyalty instead of herding us into camps?”

Jeanne Wakatsaki Houston remembered, “It was shocking to your soul, to your spirit, and it took many years for people to talk about it.”

Japanese-American orphans were rounded up and concentrated at a section of Manzanar called “The Children’s Village.” Dust covered everything. “The best part was the beauty of the mountains and the soaring red-tailed hawk that allowed me to dream of freedom.” At its peak, the population reached over 10,000. The site comprised 6000 acres and included a reservoir, water and sewage treatment plant facilities, and acreage for agricultural production.

Ryozo F. Kado, a Japanese stone mason who worked out of Santa Monica, built several local grottoes, and had converted from Buddhism to Catholicism after completing his first shrine, was relocated with his family to Manzanar. He supervised the erection of the world-famous obelisk memorializing the over 135 internees who died during their time there.

A 3.2 mile self-guided Driving Tour circles the camp but I preferred to walk. Walking, I could sense the spirits of those who had worked, mourned, loved, and hoped here.

Walking, I came upon the site of the long-gone Buddhist temple, rusted faucets near where the prisoners had watered their vegetables and flowers, decrepit sidewalks upon which children had walked to school.

Walking, I pondered that this anti-Japanese sentiment did not arise overnight. It was preceded by decades of racial smears, hate-mongering, and alarmist newscasts.

The nearby Eastern California Museum houses additional photos and artifacts from Manzanar and other internment camps: lacquered bird lapel pins, cigarette holders, brooches made from tiny shells, a ring made from the handle of a toothbrush.

Pope Francis responded to our recent election by immediately calling for world peace. “May we make God’s merciful love ever more evident in our world through dialogue, mutual acceptance and fraternal cooperation.”

And at an interfaith prayer service two days later, Archbishop Gomez similarly reminded us of the words of Jesus: “I say to you, love your enemies and pray for those who persecute you, that you may be children of your heavenly Father.”

“This is our true identity—every one of us. We are not liberals or conservatives. Before everything else, we are children of God.”

As children of God, may we do all in our power to ensure that Manzanar, and places like it, never ever blight American soil again.