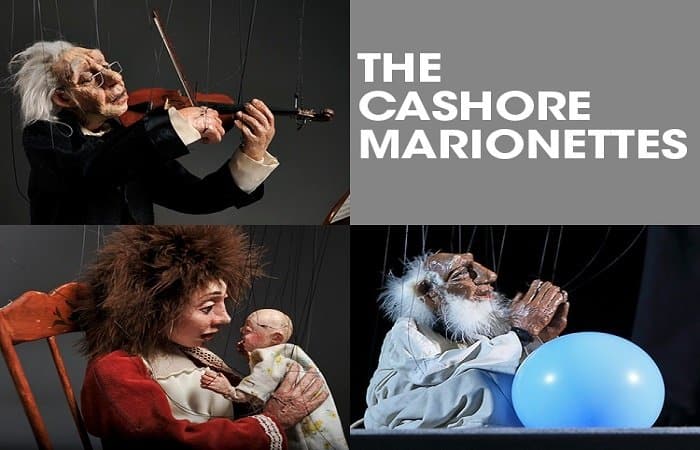 “Of the craft of puppetry, they observe “That’s a huge legacy that goes back to the 14th century. Our own work probably descends from the turn of the century, with Richard Teschner and Władysław Starewicz. The tradition of European puppets—aside from classical puppetry—was always very symbolic and very serious. It wasn’t for kids. They took on serious metaphysical themes.

Joe Cashore, the puppet-maker, puppeteer, creator, and director of Cashore Marionettes, doesn’t reference European masters like Richard Teschner and Władysław Starewicz in his interviews or act. But the craft, and the mystery behind it, are very much in evidence.

Cashore has received a Pew Charitable Trust fellowship, a Jim Henson Foundation Grant, and a Citation of Excellence from the Union Internationale de la Marionette [UNIMA], apparently the highest possible honor for a U.S.-based puppeteer.

He and his wife Wilma, who gave up medical school in favor of assisting her husband, have played the Kennedy Center, the Annenberg Center, Kravis Center

But they’re just as likely to be found in places like Pennsylvania’s Kutztown University, the Delaware County Christian School, and Caltech’s Ramo Auditorium where I caught them last month for a Saturday night show entitled “Simple Gifts.”

I’d expected the place to be swarming with kids but the audience was overwhelmingly adult; in fact older adult.

Joe was a big middle-aged guy in glasses, a button-down shirt and dark pants who announced each piece with few words and next to no affect. Wilma, similarly attired in a nondescript dark turtleneck, unobtrusively emerged before each vignette to silently place various props onstage: a Lilliputian music stand, a tiny rug, a minuscule cradle

I soon realized this was designed to cede center stage to the marionettes and also, in Joe’s case, because what looked like the unimaginably complex business of marionetteering would require near-monastic focus.

The “wikiHow to Work a Marionette” entry counsels, “Stand above the marionette in a comfortable position. Do not stand precariously as the excitement of moving the puppet can unbalance you.” At any given time, Joe might have four or five controls in his hands. Many sketches had multiple characters. That’s a heck of a lot of excitement.

How on God’s green earth do you get a marionette to shove a handkerchief into his pants pocket, I kept thinking, or throw a piece of rubbish into a trashcan, or fly a kite?

“Maestro Janos Zelinka”, played to R. Vaughan Williams’ “The Lark Ascending” featured an Old World violinist. In “A Lullaby,” a mother lovingly rocked her fretful baby to sleep with the help of Vivaldi’s Concerto in D Major.

In “African Mourning,” performed to Kevin Volans’ “White Man Sleeps,” an elephant (which we later learned weighed ten pounds and required the wearing of a harness to shift the weight from Joe’s shoulders to his hip) grieved over a fallen comrade.

The show has been called “magic without words” and the magic is in the extraordinary expressiveness Joe manages to coax from what in other hands would be inert lumps of leather, foam and string. Perhaps the best piece was “Humanity,” in which a soldier lays down his rifle and picks up a newborn—the baby of the wife of the man he has just killed.

In the post-show Q and A, we learned that each marionette is individually, painstakingly designed, and some of the secrets of how Joe makes them: the spring-loaded joints, the concealed magnets, the neoprene-coated styrofoam to keep them light.

We learned that Joe made marionettes for close to 15 years before he began operating them himself.

What we didn’t learn was where, when and why that “turn” occurred. What kind of kinship does Joe feel with his creations? Does he sometimes forget where the marionettes end and he begins?

What drives a person to a lifelong obsession with an art that, though as intricate as brain surgery, is neither wildly popular nor widely appreciated? What compels he and Wilma to keep playing to audiences around the country, night after night packing and unpacking their little violinists and homeless people and elephants and heartbroken soldiers?

The Brothers Quay come as close to an answer as we may get:
“It’s that little glint, that privileged look into a keyhole, and realizing suddenly that there’s this little universe that’s probably suffering and barely breathing, but it’s pulsating, vibrating, with its own life. That in itself is a metaphor of the universe.”

2 Replies to “THE CASHORE MARIONETTES”