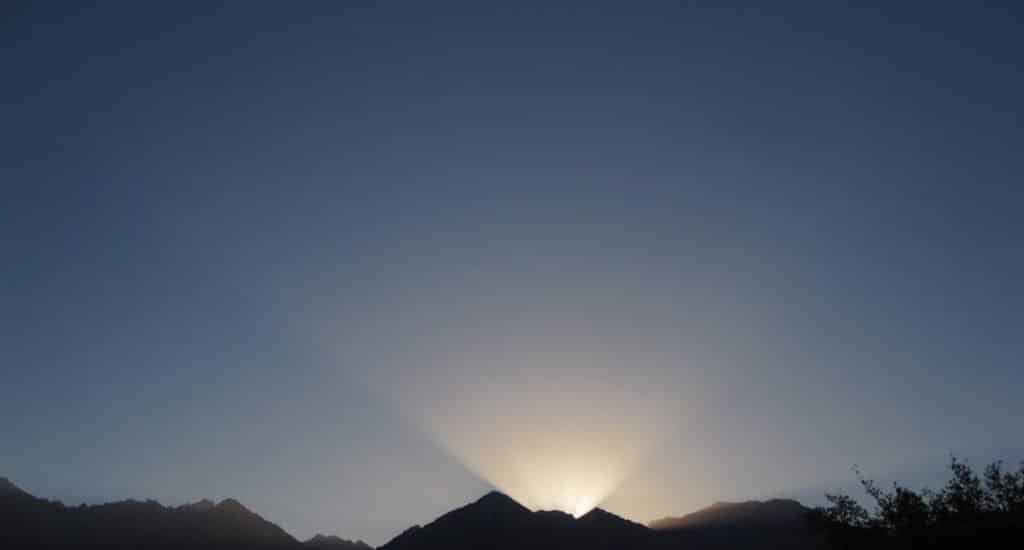 SUN SETTING BEHIND THE MOUNTAINS INDEPENDENCE, CA EASTERN SIERRAS WEDNESDAY NIGHT, SEPTEMBER 14, 2016 FEAST OF THE EXALTATION OF THE HOLY CROSS

It’s come to this: I’m sitting under a tree,
beside a river
on a sunny morning.
It’s an insignificant event
and won’t go down in history.
It’s not battles and pacts,
whose motives are scrutinized,
or noteworthy tyrannicides.

And yet I’m sitting by this river, that’s a fact.
And since I’m here,
I must have come from somewhere,
and before that
I must have turned up in many other places,
exactly like the conquerors of nations
before setting sail.

Even a passing moment has its fertile past,
its Friday before Saturday,
its May before June.
Its horizons are no less real
than those a marshal’s fieldglasses might scan.

This tree is a poplar that’s been rooted here for years.
The river is the Raba; it didn’t spring up yesterday.
The path leading through the bushes
wasn’t beaten last week.
The wind had to blow the clouds here
before it could blow them away.

And though nothing much is going on nearby,
the world’s no poorer in details for that,
it’s just as grounded, just as definite
as when migrating races held it captive.

Conspiracies aren’t the only things shrouded in silence.
Retinues of reasons don’t trail coronations alone.
Anniversaries of revolutions may roll around,
but so do oval pebbles encircling the bay.

The tapestry of circumstance is intricate and dense.
Ants stitching in the grass.
The grass sewn into the ground.
The pattern of a wave being needled by a twig.

So it happens that I am and look.
Above me a white butterfly is fluttering through the air
on wings that are its alone
and a shadow skims through my hands
that is none other, no one else’s, but its own.

When I see such things I’m no longer sure
that what’s important
is more important than what’s not.

6 Replies to “AN INSIGNIFICANT EVENT”