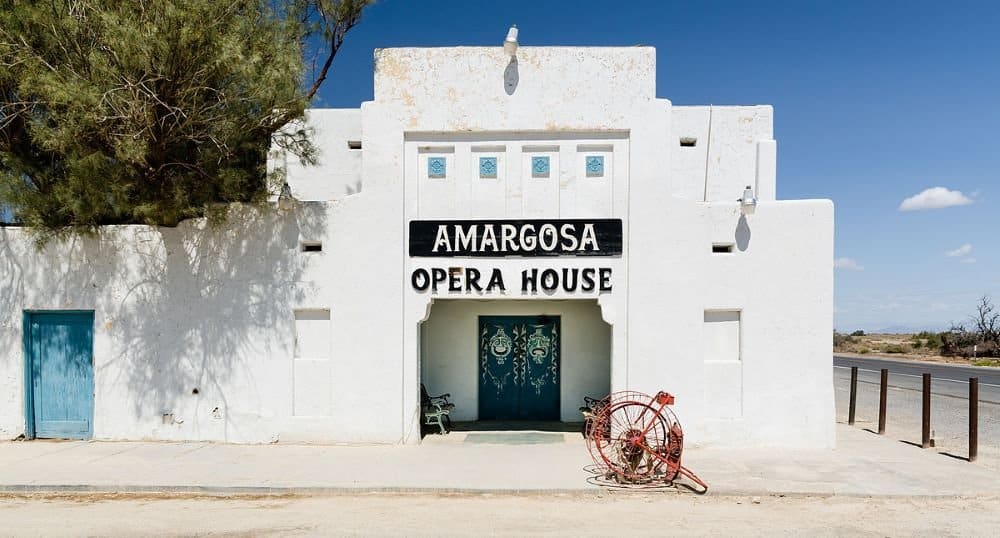 Several springs ago, I took a road trip to Death Valley, stayed at the Amargosa Opera House and Hotel, and fell in love with Marta Becket.

I never actually saw Marta—the opera house’s founder, owner, and for more than four decades, its star solo performer. At the age of 84 at that point, she performed only Saturday nights. But I did fall in love with her story.

In 1967 Marta (b. 1924), a New York ballerina, singer, painter, and pianist on a road trip to California with her husband, stopped in Death Valley Junction with a flat tire. While their car was being fixed, she peeked through the window of a dilapidated dance hall, deserted since mining days, and saw her future: her unlived life, her destiny. So she and her husband packed up and moved and rented the dance hall and opened the opera house.

Death Valley Junction at one point had a population of two and has topped out over the years at roughly twenty.

The first show was in February, 1968. The audience would often be five or six people and if nobody came, as happened frequently, Marta danced anyway. In the middle of the desert, by herself, she danced anyway.

Then she got the idea to paint the walls of the opera house with an imaginary audience: nuns, courtiers, courtesans, popes, dukes. She spent four years painting the walls and two more painting the ceiling, during which time her husband, who was tending bar at a nearby brothel, got tired of playing second fiddle to Marta’s art, found a girlfriend, and eventually left.

“Amargosa,” a documentary by Todd Robinson, was released in 2000. Someone asked, “You spent six years painting the walls of this place that could be sold, or torn down, any minute?”

“National Geographic” did a special. Busloads of folks came from Las Vegas, L.A., and in time, even farther afield.

She danced for decades: through her broken heart, her mother’s death, the floods that covered the floor of the opera house with mud. Living in the eerie desolation of Death Valley has to require nerves of steel and a transcendent vision. The desert there is beautiful, but isolated and harsh. In summer the temperature can reach 125.

In later years Marta “discovered” the handyman Tom Willet, aka Wilget, who under different circumstances might have been in danger of being called an eccentric and a clown, and incorporated him into her act. “He willingly put on a hoopskirt and picked up a fan in ‘Gossip,’ ” observed Marta. “His best turn was as Miss Victoria Hoops in ‘Looking for Mr. Right.’ ” The two were soul mates, this unlikely couple: the refined ballerina and the prankster who rode a golf cart around the property barking like a seal. They “took their meals” together and, Marta delicately got across, went their separate ways to sleep.

They put on the show together for 20-odd years and then one morning in 2005, Marta called Wilget, as she did every morning to wake him, and he was gone: felled by a stroke from which he died a few days later. She took one Saturday off and then she was back on stage. She painted Wilget into the circus backdrop of her next show.

She broke her hip in 2009 and went on to create what she called “The Sitting Down Show.” She gave her last performance on stage in February, 2012, at the age of 87.

Jenna McClintock saw Marta perform as a girl of six. She went on to train in ballet and to a career with the Oakland Ballet. In 2010, she returned to the Amargosa Opera House to thank Marta and decided to stay. During the 2015 season, she gave performances—often spottily attended—three nights a week.

As for Marta, she apparently lives alone, in back of the opera house, with a menagerie of stray cats and a revolving cast of resident caretakers.

“Society laughs at old people’s dreams. They even laugh at dreams…until they come true”…

“I must keep going, alone…I’m determined to keep going as long as I can.”

Death Valley is an easy place to picture Golgotha. The cross on a hill. That day when we will all be called to give an account of what we did with our gifts.

Or as Marta Becket—nearing her last season—puts it: “I listen for Wilget in the wind, even though I never liked the wind.”