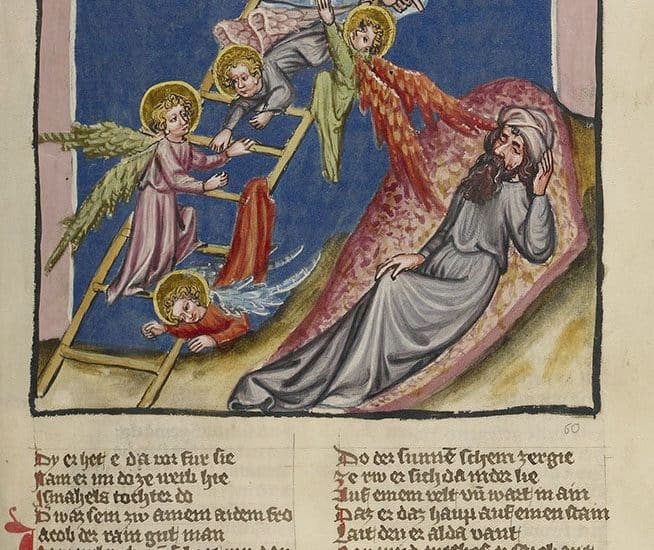 The award-winning film-maker Ingmar Bergman was the son of a Lutheran minister in Sweden. In his autobiography The Magic Lantern, he wrote of his childhood, “I devoted my interest to the church’s mysterious world of low arches, thick walls, the smell of eternity, the coloured sunlight quivering above the strangest vegetation of medieval paintings and carved figures on ceilings and walls. There was everything that one’s imagination could desire — angels, saints, dragons, prophets, devils, humans.”

That’s exactly the mood evoked by a current exhibit at the Getty Center (through September 25): “Things Unseen: Vision, Belief, and Experience in Illuminated Manuscripts.”

Through ink, gold, and pigment, Medieval and Renaissance manuscript illustrators sought to convey in images the intimacy of prayer, the mystery of revelation, and the drama of the human battleground between good and evil. These costly and labor-intensive works depicted Old Testament prophets, events from the life and Passion of Christ, and stories of martyrs and saints.

Drawn primarily from the Getty Museum’s permanent collection of manuscripts, these thirty-one works explore “the visual challenges artists faced as they sought to render miraculous encounters with the divine, grand visions of the end of time, the intricacies of belief, and the intimate communications of prayer…Rather than simply narrating otherworldly events, the innovative images in this exhibition offer visual entry points to the ineffable nature of faith.”

The exhibit includes “The Prophets with Abraham Embracing Isaac and Jacob,” “Saint Francis Receiving the Stigmata,” “Martyrs and Saints Worshiping the Lamb of God,” and “The Seven Sorrows of the Virgin.” Many of the works are in Books of Hours, a form of Christian devotional book popular in the Middle Ages.

The first letter of the first word from a given Scripture passage is often a work of art in itself. These “Inhabited Initials, or “Decorated Letters,” as they’re called, can incorporate exuberant foliage, author portraits, ornate mythical beasts, or intricate Biblical scenes.

“Initial A:“Christ Wiping Away the Tears of the Saints,” about 1330-40, for example, is attributed to the Italian Master of the Antiphonary of San Giovanni Fuorcivitas. A haloed saint in blue kneels, a tenderly concerned Christ in an orange robe anoints his eyes, an angel swoops down from above bearing a flask of healing balm. The depicted scene is Revelation 21:4: “He will wipe every tear from their eyes, and there shall be no more death or mourning, wailing or pain, for the old order has passed away.”

“Initial B: The Trinity” (1460-70), attributed to Taddeo Crivelli, is another astonishingly intricate example. God the Father holds his arms wide to embrace the arms of the Cross, while a dove descends over the crown of thorns and bloodied breast of the crucified Christ. Painted in “rich jewel tones,” this arrangement of figures, known as the throne of grace, was developed in the twelfth century and reached its greatest popularity in the fifteenth century, when this miniature was created.”

Of all the works in the exhibit, though, it was “The Side Wound of Christ” that brought me up short. We’re used to seeing images of Christ holding apart the edges of his robe to reveal his Sacred Heart, pulsating with blood and encircled by thorns. Anatomically, that heart is just where it should be.

But hidden in the slash-like red cavity depicted in this side wound—inflicted, Scripture tells us, by the lance of a Roman soldier as Christ hung on the Cross—was also a heart. This was the wound into which Christ invited his doubting disciple, Thomas, to put his finger—at which point Thomas, convinced, exclaimed: “My Lord and my God.” That all five of Christ’s wounds—hands, feet, side—have his heart at the center was a new idea.

I thought about that heart as I made my way back down the hill back to the parking structure. (I prefer to approach and depart from the Getty on foot—way more dramatic—rather than by tram). I’d returned to LA just a day before from a lengthy and tiring trip. The temperature in the San Gabriel Valley had been topping 100. I could have “gotten away” with viewing the exhibit and the text online.

I could have written a column that was “good enough” from the cool and comfort of my room.

But to follow Christ means always to be willing to give a little of our own body and our own blood. It means walking up the hill in the hot sun, putting up with the chatter and crush of the crowds when we may “feel” more in silence and solitude, sitting in traffic on the way home thirsting for a Diet Coke.

Christ didn’t avoid such tiny discomforts himself. He always went the extra mile. He let the crowds consume him when he would rather have been in a lonely place praying, alone with his beloved Father.

Owning a work-of-art Book of Hours is lovely. But the operative point, as that “Side Wound of Christ” reminds us, is trying to live by what the Book of Hours instructs.

No comments yet
ILLUMINATED MANUSCRIPTS