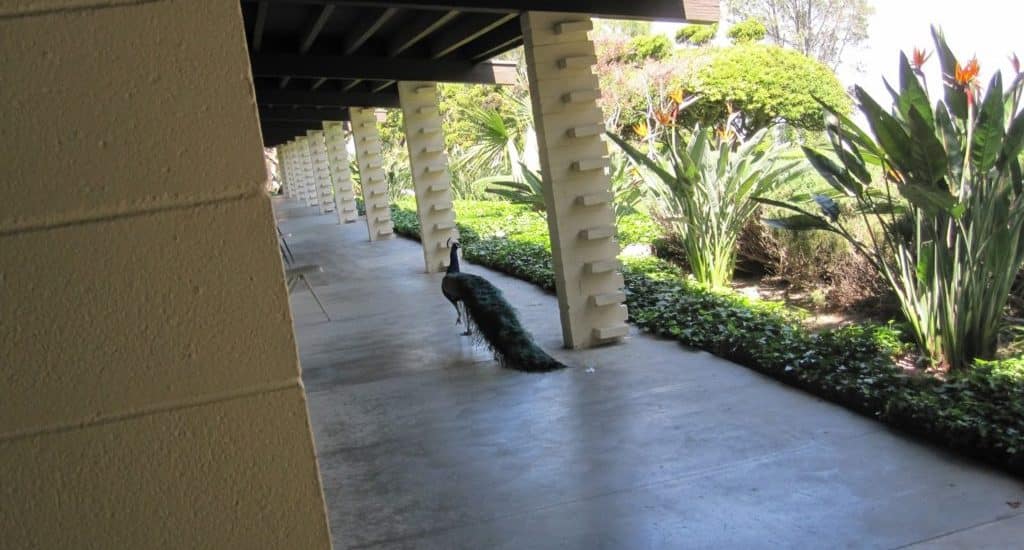 The Mary & Joseph Retreat Center’s mission is “to provide an environment of serenity, prayer, and natural beauty.”

That won’t happen on your way there, which is going to be down the 110, the 405 or the 605. The Center is in Rancho Palos Verdes, on the farthest tip of the South Bay.

The 8-acre grounds feature flowering shade trees and beautifully-tended native plants. There are also hummingbirds, six or so wandering-pilgrim peacocks, and the occasional hawk.

The grounds are open during daylight hours so people are welcome to come to enjoy the gardens, walk the labyrinth, or pray in the chapel, which is accessible most days from 6 am to 10 pm. That has to make Mary & Joseph one of LA’s best-kept secrets.

The Center also has two suites, allowing for overnight accommodations for 69 plus a few rollaway beds, two large conference rooms that can hold around 100 and two smaller ones in the annex room, each holding up to 50 people.

Visitors can attend guided day, weekend, and long (5 to 8-day) retreats. They are also welcome, space permitting, to make a private retreat that can range from a single night to up to two weeks.

Annette Lenneman, executive director for the last ten years, says, “We come here from a busy world, full of noise, obligations, and distractions. When people drive through the gates, a totally different feeling comes over them.”

The Center is what the Irish call a “thin place.” A sacred place. A place to be held and to rest in God’s grace.

People often arrive at the retreat very stressed out, not knowing exactly what they need or what they’re looking for. “When they leave on Sunday, there’s such a transformation. We see a calmness, a healing.”

“The employees are the face of Mary & Joseph. Our job is to welcome all who come. We try to have things ready and set up according to the group’s desires and specifications, and to accommodate any change they may want to make once they get here. We’re not a hotel, though we provide some of the same services. We’re like a spiritual hotel.”

“Every person has different needs, often times they don’t know what they need. Through rest, reflection and encountering the sacred each person finds him or herself renewed, which in turn renews the sacredness of the Center.”

“The common denominator is how the retreatants leave. Recently we hosted a retreat for health care professionals. To see them leave invigorated at the end of the three day retreat was wonderful.”

The Center will hold a fundraiser on July 30th. The proceeds will be used pay for the new roofs.

The Center was started in 1963 by the Daughters of Mary and Joseph, an order of sisters whose goal is to be the instruments of God’s mercy and compassion. They have houses in Africa, Belgium, England, Ireland, and in the California. Six came over on a ship in 1926.

They opened several area schools and, in the late ‘50s, began searching for a place for their novitiate. The archdiocese acquired a parcel of property and sold a portion to the sisters and the remaining portion of the land became St. John Fisher parish next door. The sisters decided that the parents of the children they were teaching needed time together, so the Center started as a retreat center for married couples.

The sisters were clear from the beginning that they didn’t want to minister only to Catholics. Groups of both religious and non-religious affiliation, including a variety of non-profits, are welcome. Seven 12-step meetings meet on the grounds each week, for example, and the Center frequently hosts 12-step retreats. The first one was given by Msgr. Terrence Richey of the LA Archdiocese back in the mid-80s.

Full disclosure: I’m to lead a retreat at the Center myself in November.

Annette graciously allowed me to stay at the Center for several days recently, Maybe, partly because I needed a quiet place to work on my next book and partly to acquaint myself with the grounds.

I should say re-acquaint myself. I’d made a retreat at the Center way back in the early 90’s—my first ever.

At the time, I was working as a lawyer and in deep existential and vocational crisis. Up early Sunday morning, I headed toward the dining hall for coffee and ran into the old Irish priest who was giving the retreat.

I knew my eyes were pleading, “I don’t know which way to turn, and I’m in deep, deep pain.” I expected the priest—who I had never seen before and would doubtless never see again—to say, if anything, “Best get a grip,” or “You’ll find some Kleenex in the kitchen.”

Instead this lovely man, full of natural reserve, inclined his head, as if he were listening very carefully, touched me gently on the arm, and said, “You’re very dear to God.”

I quit my job as a lawyer shortly afterwards, followed the call of my heart to write, and came into the Church in 1996.

Wandering those same grounds in 2016, I skirted a rosebush. Across the lawn, a rogue peacock shrilled.

Twenty years later—thanks to Mary, Joseph and that unsung saint of a priest—I’d come full circle.