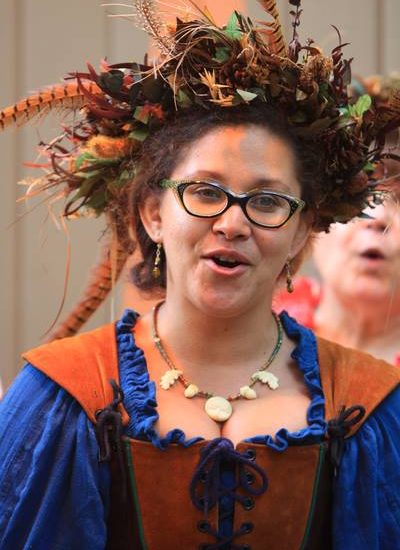 ALYSSA GALE OF THE BRITON ENSEMBLE

A few Sundays ago, I made my way toward evening north of Pasadena. The neighborhood is lovely: up against the mountains, up above the city, quiet.

The homes were large, graceful, and charmingly landscaped.

When I arrived, a woman in medieval serving wench costume with a gigantic bosom and a feather wreath in her hair was sitting cross-legged in the driveway. “Welcome!” she said brightly.

Inside I felt as if I’d stepped onto the extras lot of the Errol Flynn “Three Musketeers” shoot. There were more wenches, in tightly-cinched corset-style bodices and long full skirts. There were men in leather jerkins, harlequin-style pantaloons, striped stockings and fawn-colored boots. Fringed, ruffled, medallioned, sporting an astonishing array of feather-bedecked headgear, the whole merry group toasted with another with tankards of what could only be mead.

This was the Briton Ensemble, whose work has been described by “Splash Magazine” as “madrigal magic.” Directed by James Briton Hendricks, the ensemble sings 16th-19th century madrigals and original songs by Hendricks. They’ve performed at the Renaissance Fair and the Dickens Christmas Fair.

The venue was a private back yard, up in the hills of Altadena.

Our hosts were a couple: an artist whose recent work includes a series of paintings that “addresses animals in the interface between the wild lands and the city” and a woman who designs and promotes waterwise habitat gardens in the American Southwest climate zone.”

A sense of fun and generosity of spirit permeated this afternoon with the Briton Ensemble from one end to the other.

In the “entryway” was a long table of delicious-looking potluck type salads, casseroles and fruit. Someone was setting up wine and sodas.

I passed through, thinking that any minute someone would be asking for money.

Inside a series of moss-covered terraced stone seats formed a bowered amphitheater. The garden was evidently a showcase for our hosts’ love for and knowledge of native plants.

I clambered up a few levels, found a perch near a patch of flowering succulents, and settled in with a shimmery silk moiré pillow to ease my back.

“So where in Europe are you going?

“It seems to me there’s a salt mine and don’t miss out on the beer garden. Plan for a little trip down the Rhine”…

Though I’d come alone, I felt entirely at home and at ease. A lovely man sat next to me, introduced himself as Eric, and said he was a neighbor who’d been following the Briton Ensemble for years.

At six sharp, the concert began. James Briton Hendricks, the impresario and director, reported that the ensemble began as a potluck among friends. They started singing rounds for fun and gradually moved on to madrigals. Hendricks is classically trained; the other 18 members are amateurs. They’ve been performing together since 2008.

Their delight is evident and contagious.

Their instruments include the concertina, the recorder, the lute, and the tabor drum.

Their repertoire includes “Three Merry Men of Kent,” “Your Shining Eyes” (1604) by Thomas Bateson, “Pastime with Good Company” by Henry VIII, and Purcells’s “With Drooping Wings” from Dido and Aeneas.

As the sun fell lower on the horizon, strings of fairy lights, several large white globe lights, and garlands of round clear bulbs came on and began glowing through the dusk.

I looked up at the trees, then around at the 80 or so folks who had come to share this Southern California spring evening. I thought, as one so often does on a late Sunday afternoon, of death. “I have loved, O Lord, the beauty of Thy house, and the place where Thy glory dwelleth.”

Post-concert, all were invited to a sumptuous feast around that groaning table I’d seen on the way in. The Briton Ensemble turned out to be 21st people like you and me, with normal speech patterns and cell phones.

But the afternoon was kind of magic anyway.

One Reply to “MADRIGAL MAGIC: THE BRITON ENSEMBLE”