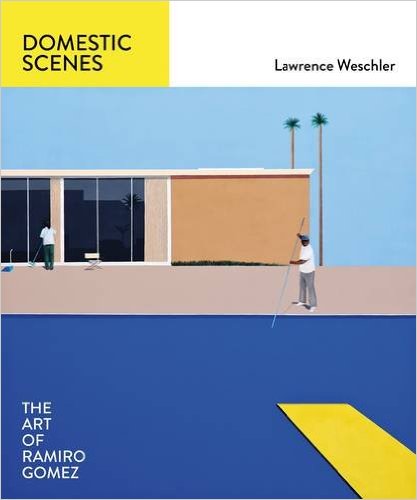 Marta was the cleaning lady of the woman who owned the house in Silver Lake—my roommate—where I lived from 2010 to 2014. Every other Wednesday, Marta arrived at noon and stayed until 8.

Marta didn’t clean my little wing (bedroom/office and bathroom), but the whole time she was there I felt I should be asking if I could pitch in. I’d be sitting in my room with the fan on, a glass of iced tea, and a basket of fresh figs writing about the Crucifixion while she was out in the blazing sun emptying the mop bucket.

Artist Ramiro Gomez was born in 1968 in San Bernadino to (then) undocumented parents from Mexico. His father drove trucks; his mother was a janitor at the same high school from which she’d graduated.

An introspective kid who showed talent in drawing early on, he adored his grandmother Nina, was “nannied” by his aunts and grandmother, and himself frequently babysat for his sisters and cousins.

He won a partial scholarship to CalArts but left after a year, alienated by the “mandarin artspeak.”

He got a job nannying for a West Hollywood Industry couple. He began sketching at night, tearing out the ad pages from the sleek design and fashion magazines discarded by his employers and inserting his drawings. He juxtaposed the superficiality of opulence and wealth with the vast army of workers who make such lives—who make all our lives–possible: the gardeners, truck drivers, nannies, housecleaners, car washers, handymen, moving guys and pool cleaners without which LA would grind to a halt in about two days.

In 2013 Gomez had his first solo exhibition—“Luxury, Interrupted”—at the UCLA Chicano Studies Research Center. He installed a mural in West Hollywood Park called “The Caretakers.” He did a series of life-size painted figures, cut from cardboard, called “Los Olvidados” (The Forgotten Ones) about the 2600 migrants who died between 2000 and 2013 attempting to cross the Sonoran Desert that borders Arizona and Mexico (his long-time partner David Feldman made an accompanying, award-winning documentary short that can be viewed on youtube).

“It’s very personal. It’s almost as if it were, to me, a self-portrait. When I’m painting [the cutout cardboard figures], I’m bringing out the skin color of my uncle, the hairstyles of my mom, the body shape of my aunts. That’s what I know.”

“My goal is to get people to understand rather to confront them.”

He began to receive notice: first locally, then nationally, then globally.

He did a series of paintings that riff on and pay homage to one of his heroes: the painter David Hockney. Hockney’s “American Collectors (Fred and Marsha Weisman)”, depicting a wealthy couple in back of their mid-century modern home surrounded by art objects, for example, becomes Gomez’s “American Gardeners”: the Weismans replaced by two Latino workers, one bandoliered by a leafblower.

Just out from Abrams is a book of his work called “Domestic Scenes: The Art of Ramiro Gomez.” The introduction, by New Yorker writer Lawrence Weschler, tells the full backstory of Gomez’s family life and the trajectory of his career. Together, the two visit Hockney himself, at his home atop Mulholland Drive.

Hockney and Gomez are charmed by each other.

Weschler describes accompanying Gomez on a trip to Mexico City where his work will occupy a booth at Zona Maco, a high-end contemporary art fair. Gadding about to visit cutting-edge gallery owners and international collectors, Gomez notes, “I can’t help constantly feeling like I am on the wrong side of this window of privilege, driving around in cabs like this. How am I any different from those folks out there, who have to trudge about everywhere and never ever get to ride in taxis?”

Those are the horns of the dilemma on which we are all speared. Do we show our solidarity with the poor by remaining poor or by “moving up?” Was I more or less in solidarity with Marta by preferring to clean my own room instead of paying her to clean it?

Only once did I see Marta outside the house where I lived with my roommate.

It was on a Sunday morning in the Communion line at St. Francis of Assisi Church in Silver Lake. From the adjacent line I heard an excited whisper: “Het-ter. Het-ter.”

And side by side, inching along toward the altar, we embraced.

No comments yet
DOMESTIC WORKERS