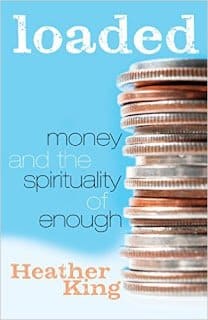 My new book—“LOADED: Money and the Spirituality of Enough”—is about how I looked at all those ideas in light of the Gospels and came to a healthier, more life-affirming relationship to earning, spending, and giving.

In 1987, I got sober. In 1990, with the law degree I’d earned while drinking, I landed a job as an attorney and started making money for the first time I my life. In 1994, I quit that job in order to embark on the precarious vocation of a writer. In 1996, I converted to Catholicism and joined the Church.

To quit that job as a lawyer was one of the biggest leaps into the unknown, requiring the most heart, of my life.

I made almost no money from writing for the first ten years.

Since then, I have, however, become increasingly fascinated by the “economy” described in the Gospels. The parable of the prodigal son [Luke 15:11-32]. The worker who comes late to the vineyard and receives the same pay as those who came early [Matthew 20:1-16]. The familiar “No man can serve two masters: for either he will hate the one, and love the other; or else he will hold to the one, and despise the other. You cannot serve God and mammon” [Matthew 6:24].

In fact, Christ had reams to say about money, earning, vocation “Regard the lilies of the field.” “Blessed are the poor.” “If a man ask for your tunic, give him your cloak also.”

During his public life, Christ himself seems to have owned few to no private goods and also to have been entirely unconcerned with money. He seems to have carried no money on his person. When he needed a coin for the temple tax, he told Peter to go catch a fish and open its mouth and there he would find a coin. He didn’t despise money; he just didn’t think about money, or at least he didn’t worry about money. He seemed to live in supreme confidence that money would come if and when it was needed.

But Christ had lived for thirty years prior to that. He came from a family that was poor and marginalized. He worked with his hands, presumably beside his father, as a carpenter. He didn’t pull the parable of the workers in the vineyard, the parable of the unjust steward, or the parable of the talents out of thin air. He’d worked for rich people who had stiffed him, for wealthy merchants who drove a hard bargain, for home-owners who tried to wring out of him every last shekel and never offered him so much as a glass of water while he toiled in the hot sun. Like us, he had to negotiate contracts, prices, working hours, benefits. Like us, he’d worked at times, out of necessity, for liars, profiteers and cheats.

Like us, he lived in a time when people tried to make God into a product, a package, a marketing opportunity.

He drove the money-changers out of the temple with a whip.

Clearly in a culture sickened by materialism, gluttony and greed, our Gospel call to live simply and to share abundantly is more pressing than ever ever.

Clearly, for many of us, voluntary poverty is an ideal.

But to be voluntarily poor we have to be rich first: in trust, in love, if not in money.

And just as clearly, many of us are in various kinds of bondage around money.

Our wounds around money can become forms of involuntary poverty: poverty of imagination, poverty of faith.

Here are three main ways that can happen.

–Staying in a low-paying job we don’t like because we’re too afraid to apply for something more challenging, go to school to get a degree, or otherwise intellectually, emotionally and spiritually stretch
–Staying in a high-paying job we don’t like out of fear of giving up the benefits or pay.
–Staying stuck in a job, no matter what the pay, because we don’t know what we really want to do; or because though we do know, we tell ourselves that to follow our hearts is impossible.

At different times of my life I’ve suffered from, and gone a long way toward working through, all three.

LOADED has stories, laughs, and community-building tools—for we can’t overcome our fears around money, or anything else, on our own.

I hope you buy my book. I hope you find some meat in it.

2 Replies to “LOADED: MONEY AND THE SPIRITUALITY OF ENOUGH”