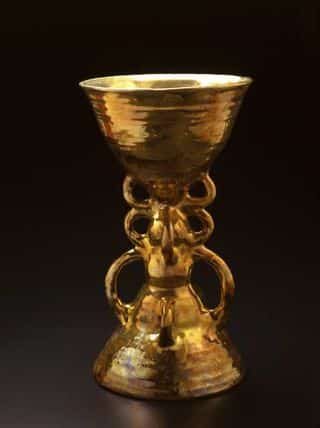 Beatrice Wood (1893-1998) was a Southern California-based artist and studio potter. As a young woman, she broke with her wealthy San Francisco family to live as a Bohemian in Paris, becoming close friends with Marcel Duchamp, Man Ray and others in the avant-garde Dada movement. She took her first ceramics class at Hollywood High.

In 1947, she moved to Ojai where she largely lived and worked for the next fifty years.

Wood’s autobiography, published when she was 82, features a front-cover photo of the author as a smoky-eyed seductress of 16: “I Shock Myself” the book is called. I was shocked, too: mainly to discover another woman whose romantic debacles rivaled even mine.

The first man she married was a theater manager from Montreal who turned out already to have a wife in Belgium. Her second marriage came about because the house the couple were sharing in the Valley washed away in a flood and they wanted to be eligible for disaster relief (though the two stayed together the 22 years until his death, the marriage was consummated).

Wood was much given to heavy jeweled cuffs, Indian gurus and the kind of vague exotic “mysticism” that makes people from back East (I should know) roll their eyes and mutter: “California—land of the fruits and the nuts.”

Laugh all you want: This splendid grande dame lived to the ripe age of 105, working, stretching, discovering, and sharing to the very end.

“I have only on extravagance in my life,” she once explained. “I wish it were a gigolo, but it’s not. It’s art books.” In a black and white photo, taken two years before she died, she’s draped in a silk sari and stretched out on a velvet divan in what looks like the afterthroes of a tryst. In another, a bevy of chiseled shirtless men, oiled torsos gleaming, campily present the aging ceramics diva with a birthday cake.

Her saving grace is that she herself seems to have viewed such shenanigans tongue-in-cheek. Another is that she clearly worked her tail off. That she did her best work, as is widely agreed, in her 80s and 90s is no gesture.

And the body of truly beautiful, elegantly simple work she left–platters, goblets, chalices, teapots, footed bowls—speaks for itself. “Gilded Vessel: The Lustrous Art and Life of Beatrice Wood,” by Garth Clark, is a good place to learn more. Better yet, take a field trip to the Beatrice Woods Center for the Arts in Ojai.

In the library, you can look over those art books Wood used for inspiration and research: “The Doll.” “Turned Wood.” “Brancusi.” “Islands and Ancestors.”

You can tour her studio, still a working space for ceramics students from the adjacent Besant Hill School, the shelves still lined with jars of Wood’s own glazing powders, pigments and fixatives.

You can marvel at her work: a turquoise and copper bowl, a gold luster chalice with ten handles, a green luster cup and plate.

You can recline on a lounge on the back patio, watch the butterflies frolic, and survey Happy Valley.

I took a pottery class myself recently: Introduction to Hand-building. Let me tell you: it’s harder than it looks. The other students quickly moved on to coils and slabs. “Can I just try another tiny misshapen bowl?” I’d plaintively ask our instructor, who was busy helping the others make three-tier jewelry boxes, complicated teapots, and four-gallon planters.

In his recent book, White Road, world-famous ceramicist Edmund de Waal writes of the first clay bowl he ever made, at the age of five:

“And the following week I take home my white bowl, three waves of clay as fat as fingers, a scooped inside with a whorl of marks and heavy, but a bowl and white and mine: my attempt to bring something into focus. The first pot of tens of thousands of pots, forty-plus years of sitting, slightly hunched with a moving wheel and a moving piece of clay trying to still a small part of the world, make an inside space.”

Anyone who’s ever tried to make a living from “trying to still a small part of the world”—whether by throwing pots, composing symphonies, or writing essays—will know that Wood got one thing exactly right in a short treatise called “The Art of the Invoice.”

“Now I feel that there are two important things about living: choice and invoices…I sincerely believe now that the most important thing in the world is to have correct invoices. And, I mean this is a symbol of life.”

“And I say to those of you who are students: If you have, for example, some pottery, you have to deliver on time or your dealer can’t stay open. And it’s only as we communicate with each other, and are dependable and clear that life can flow clearly.”

“So my message to you is watch your invoices.”

One Reply to “THE POTTERY OF BEATRICE WOOD: SOUTHERN CAL ECCENTRIC EXTRAORDINAIRE”