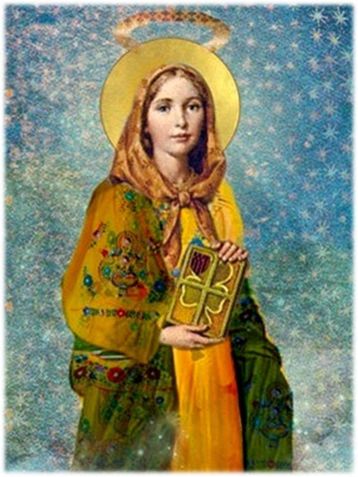 May 15 is the feast day of St. Dymphna, patron saint of those suffering from emotional or nervous disorders.

Dymphna was the only child of a 7th -century Irish pagan king and his beautiful Christian wife. The child was a dead ringer for her mother.

When the mother died young, the king was inconsolable. He wanted to marry someone who looked just like his wife. His courtiers came up with the bright idea: why not marry your daughter?

Dymphna, who had consecrated herself and made a vow of chastity, was appalled. “Think of the riches, the security, the prestige!” the king urged.

No way, said Dymphna, who seemed more horrified at the prospect of losing her virginity than of becoming an incest victim. She fled to the village of Geel, in what is now Belgium, with her confessor, the court jester, and his wife.

Inadvertently betrayed by the innkeeper to the king’s envoys, Dymphna’s whereabouts were revealed. Inevitably, the king came to claim her.

His henchmen decapitated the priest first. Then the king sprang to his feet and with his own sword, chopped off Dymphna’s head. She was 15.

And you thought your family was dysfunctional.

Being of Irish descent myself, I have a large statue of St. Dymphna on a shelf in my bathroom.

And anyone who has suffered from nervous, emotional or mental disorders knows they are no joke.

The Church to her credit is full of such people who, through Christ, have borne much fruit. There’s Léon Bloy (1846-1917), French novelist and convert, who had a notoriously foul temper, was perpetually penniless, and at one point fell violently in love with a prostitute who later converted, saw visions, and was committed to an insane asylum.

There’s Blessed Bartolo Longo (1841-1926), former Satanist priest, who came back to the fold, entered into a chaste marriage with a countess, and went about his native village praying the Rosary with his arms outstretched, as if nailed to the Cross.

There’s Jan Tyranowski (1900-1947), one of Karl Wojtyla’s (later Pope John Paul II) first spiritual advisors, an eccentric tailor who lived with his mother and was so rabidly evangelical he sometimes frightened the neighborhood children. .

In “The Varieties of Religious Experience,” William James observed:

“There can be no doubt that as a matter of fact a religious life, exclusively pursued, does tend to make the person exceptional and eccentric. I speak now not of your ordinary religious believer… We must make search rather for… individuals for whom religion exists not as a dull habit, but as an acute fever rather. But such individuals are ‘geniuses’ in the religious line; and …have often shown symptoms of nervous irritability…Invariably they have been creatures of exalted emotional sensibility. Often they have led a discordant inner life, and had melancholy during a part of their career.”

Case in point: Caryll Houselander (1901-1954), the British mystical writer who wore “some abomininable chalk-like substance” on her face, once saw a vision of Christ crucified spread out over the sky while walking to a street vendor’s, and possessed a deep heart for traumatized children.

Maisie Ward’s fine biography, “That Divine Eccentric,” has a passage in which Houselander describes the Mass she once attended at a “Lunatic Asylum.”

“I’ve seldom—if ever—been present at anything so moving as the prayers in the tiny Catholic chapel in the evening, organized entirely by the patients, the prayers of their own choosing and said aloud; and what a mystery and what an example—an ex-Trappist monk, a young girl, an old lady bent double nearly, but in spite of it and of being insane, beautiful, and a handful of others, all people who had started out in life intent on a high vocation, and given it indeed utter abnegation, put away in a lunatic asylum. And this is the point—they reached in their prayers to the whole world. As I knelt among them listening at first and in the end joining in unconsciously with them, I grew more and more amazed at their petitions:

And then, to me, the most moving petition of all, “That we have in this little chapel dedicated to Your Divine Heart may have perfect abandonment to Your dear Will.”

I once asked a priest friend how I could tell if I were making spiritual progress. He thought for a minute, then replied: “If crazy people aren’t afraid to come up and talk to you—that’s a pretty good sign.”

3 Replies to “ST. DYMPHNA, PATRON SAINT OF THE MENTALLY ILL”