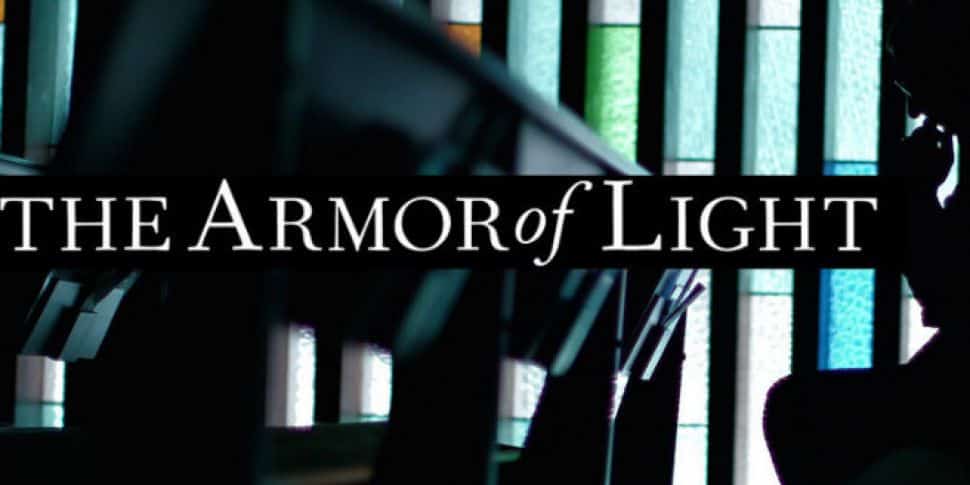 Some of us see a disconnect between supporting the child in the womb and also promoting gun ownership. Others see guns as precisely the best way to protect everyone.

Reactions tend to be kneejerk, feelings run high, and dialogue can be difficult to impossible. So Abigail Disney, producer and director of the recent documentary “The Armor of Light,” is to be roundly applauded.

The documentary features two figures on the opposite side of the gun divide.

Rev. Rob Schenck is a Washington mover-and-shaker whose conservative, often Tea Party Republican, constituents are almost uniformly against abortion and for the National Rifle Association.

“I’m an evangelical Christian,” he says. “That goes to the heart of my identity. The real organizing principle of my life has been the sanctity of life.”

In the early days of the movement, the commitment to non-violence was uppermost in his mind. But then some people appeared to have a very different set of principles. In 1986 Barnett Slepidian, an abortion doctor, was killed with a high-powered rifle by a member of the pro-life movement.

As founder of Faith in Action, a ministry that primarily serves Capitol Hill and the Federal government, Schenck “realized that if people under my spiritual care were capable of this, I was probably capable of this.”

In October, 2006, he was called to the Amish community where eight schoolgirls, age 6-13, had been shot and killed by a deranged gunman. “The most moving part was going to the home of the shooter and witnessing the forgiveness.”

Then, in 2013, a lone gunman fatally shot twelve people at the Washington, D.C. Navy Yard—within sight of Schenck’s apartment. The incident nagged him, clawed at his subconscious.

Her son, Jordan Davis, was murdered at the age of 17 by an adherent of Florida’s stand-your-ground self-defense gun law. Jordan was unarmed.

She became a passionate supporter of gun control. ““We’re deceived into thinking we’re so powerful because we have something that will protect us,” she says. “We’ve replaced God with our gun as our protector.”

McBath’s experience and witness helped move Rev. Schenck past a point of inertia.

““This is not a political issue,” he realized. “When faith becomes inseparably linked to a political situation, in a sense we become vulnerable to selling our souls.”

So he began gently broaching the subject to his constituents—a move he knew could be career suicide.

The response was virulent and instantaneous.

“There is no greater freedom than the right to survive, to protect our family with all the rifles, shotguns and handguns that we want. “

“It’s not guns that kill people. It’s like outlawing automobiles.”

“There’s evil in the heart of man. If we take guns away, people are just going to kill each other with something else.”

To which Schenck asks: “So what we need is Jesus and the Gospels and a sidearm?”

He began to question the ethical ramifications of moving through the world in a constant defensive posture. He began to wonder, How theologically correct is it to live in fear?

As for Disney, a NYC-based documentary filmmaker, scholar, activist, and philanthropist, “I spent years wrestling with how to make a gun film in this culture that actually makes a difference, that addresses our violent culture of war and death.”

“I wanted to find somebody in the committed pro-life world. I knew there’d be an honest broker, acting in good faith, who could help me understand.”

She and Rev. Schenck were on opposite sides of many divides. Their initial approach was wary.

But they quickly realized they’d been raised with the same values. “We both valued history, tradition, authority. We both valued life, honesty, loyalty, generosity. Did we really disagree on all that much if we were willing to take guns out of the equation?”

They had rich, substantive conversations on the phone. They talked theology, life, non-violence, death. Rev. Schenck talked about the gun issue in terms of the Second Commandment: “Thou shalt not make unto thee any graven image.” They discussed the fact that guns and the right to gun ownership can become idols.

In the process, they became close friends—an act of peace-making in itself.

Disney’s first documentary, Pray the Devil Back to Hell, was about the non-violent protests of the women of Liberia, who successfully organized for peace against the brutal dictatorship of Charles Taylor. “I’ve seen bravery,” says Disney. “I’ve seen courage. I’ve seen what women can do. If you give women permission to act, they will act.”

As if to underscore the point, near the end of the film Rev. Schenck asks McBath if she has concerns for her personal safety. She replies: “If I have to give my life, if I end up giving my life to this cause, then that will be my life.”

One Reply to “THE GUN ISSUE AND ABIGAIL DISNEY’S DOCUMENTARY: “THE ARMOR OF LIGHT””