Bill Cunningham, the subject of the 2010 documentary Bill Cunningham New York, is a fashion photographer who for years has maintained two spreads in The New York Times. “Evening Hours” covers the social, philanthropic, and political world of New York’s high society.

“On the Street” is an “attempt to tease out trends in terms of the reality of how people dress,” observes Harold Koda, curator of the Costume Institute of the Metropolitan Museum of Art. “I really feel he does address the whole spectrum of what we are as New Yorkers and I believe he’s the only one who does it.”

Cunningham, 83 when the film was made, rides around Manhattan on an old (donated) Schwinn (his twenty-ninth; the previous twenty-eight were stolen). He gets his film developed at a mom-and-pop convenience store called Photo King. He sleeps in a cot in the same tiny studio above Carnegie Hall where he’s lived for decades.

Threatened with eviction and offered a new, snazzy apartment, he frets, “Who the hell wants a kitchen and a bathroom? Just more room to clean.”

He loves color, cut, the male and female form. He cares nothing for celebrity. He cares profoundly, almost religiously, for clothes, and for the people who wear them.

He also has a patrician Boston accent, the kind of old-school class that forbids self-pity or self-promotion, and his own brand of style—a worn-backwards newsboy’s cap, a blue sweater tied over his shoulders. Tall, ascetically lanky, and brisk without being rude, his chief characteristic is a compelling, exuberant joy. “Child,” he calls a fifty-year-old woman. “You kids,” is his term of affection for the NYT staff with whom he works.

By night he photographs celebs and the Brooke Astor set; day in, day out, he himself wears the same kind of sturdy blue smock worn by Parisian street-sweepers.

“Damn you, New Yorkers. You’re all so extravagant and wasteful,” he teases, repairing a cheap plastic poncho with duct tape before he sets out in the rain with his camera. “I think this embarrasses everyone. But it doesn’t embarrass me!”

“He’s like a war photographer,” notes Kim Hastreiter, co-editor-in-chief of Paper Magazine. “He’ll do anything for the shot.”

Some think fashion is frivolous. For Bill, “It’s the armor to survive the reality of everyday life. I don’t think you could do away with it. It would be like doing away with civilization.”

He knows many of the club kids, the drag queens, the rappers by name. “The best fashion show is definitely on the street…It’s always the hope that you’ll see some marvelous exotic bird-of-paradise.”

But while he’s in the world, he’s not quite of it. He takes his shots. He pedals off into the night. He keeps his private life, thoughts, and the impetus behind his prodigious drive—his mission—to himself.

“I think [the work] has to be done discreetly, quietly. Invisible to the world.” In Paris for the haute couture shows, he reluctantly accepts an award from the French Minister of Culture making him an Officer in the Order of Arts and Letters.

“I don’t work,” he tells the audience with a boyish grin. “I only know how to have fun every day…. It’s as true now as it ever was: He who seeks beauty…” [choking up] will find it!”

Only people who come from wealth can live the way he does,” says Annie Flanders, the founding editor of Details. “But I’ve never actually discussed it with him.”

“Have you ever had a romantic relationship?” the interviewer asks near the end of the film.

“Are you asking if I’m gay?” he cackles. “But no, I haven’t…. It never occurred to me. There was no time. I was working night and day…. In my family, such things were never discussed. So it wasn’t even in my head or my mind. I wouldn’t have known a thing about it. I’ve enjoyed [my work] so much that it didn’t…. But hey, listen, I am human…You do have, uh, body urges or whatever, but, uh, you control it as best you can.”

“I know that you go to church every Sunday.”

“And does religion…. Is that an important component of your life?”

Here Bill, overcome, bows his head and for several moments is unable to speak.

Finally, he gathers himself. “Yeah, I think it’s a good guidance in your life…. It’s something I need and…it’s part of your upbringing….As a kid…I went to church and all I did was look at women’s hats…. But later, when you mature, [you go] for different reasons.”

Here is a man who, at the day of judgment, is going to be able to give the best possible account of himself. He wasn’t trying to prove anything. He wasn’t judging anyone. He was experiencing existence to the absolute hilt, every second.

I thought: I hope this man lives forever!

But of course—he already has. 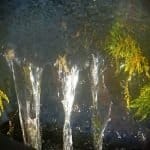