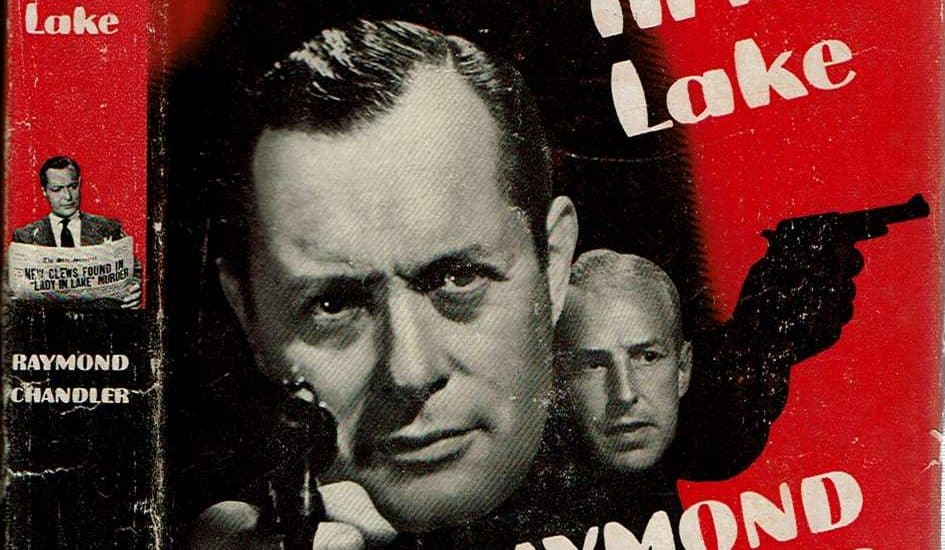 Raymond Chandler (1888-1959) created the character of hard-boiled L.A. private eye Philip Marlowe. His novels, among them The Big Sleep (1939), Farewell, My Lovely (1940), and The Lady in the Lake (1943), are widely considered masterpieces of noir crime fiction.

Marlowe knows the feel, the smell, the pulse, the dirty corners and the unconfessed sins of Los Angeles.

“There was a desert wind blowing that night. It was one of those hot dry Santa Ana’s that come down through the mountain passes and curl your hair and make your nerves jump and your skin itch. On nights like that every booze party ends in a fight. Meek little wives feel the edge of the carving knife and study their husbands’ necks. Anything can happen. You can even get a full glass of beer at a cocktail lounge.”

Marlowe’s town is our town. He knows L.A.’s flowers, birds and trees: pepper, Italian cypress, eucalyptus. He drives the streets we drive: Franklin, Western, Wilshire, Highland. He knows what it’s like to move beneath perpetually sunny skies with a sense of impending doom:

“Time passed again. I don’t know how long. I had no watch. They don’t make that kind of time in watches anyway.”

His moral code, however, is perhaps a tad higher than ours.

He’ll go to any lengths, up to and including putting his life in danger, to honor his hundred-buck retainer. He’ll rough people up, but only if they throw the first punch. He carries a gun only when he’s going into situations where he knows others will be armed.

He’s courteous in the old-school, medieval sense of the word. He does what he has to do, but he never lords it over those in a position of lesser power: whether it’s a two-timing women or a punk he’s just sapped.

He’s protective of innocence. He drinks, often in the middle of the day, but he’s never sloppy. He has a discerning nose and a discriminating palate. He can distinguish between expensive perfume and dime-store; a mellow, aged scotch and lower shelf; real tortoiseshell and a cheap imitation.

One morning he receives the bloodless police chief Randall at his Hollywood apartment and offers him breakfast. “That’s good coffee,” Randall concedes:

Women throw themselves at Marlowe and whether he takes them up or not, he’s always gracious about it. He doesn’t take advantage and he doesn’t promise what he can’t deliver.

“My God, you big dark handsome brute! I ought to throw a Buick at you.”

“It was a blonde. A blonde to make a bishop kick a hole in a stained-glass window.”

He seems to have neither family nor close friends. Like Christ, he defines people by their characters, not their professions:

He’s realistic but not cynical:

“You can crab over the morning paper and kick the shins of the guy in the next seat at the movies and feel mean and discouraged and sneer at the politicians but there are a lot of nice people in the world just the same.”

He excuses, or at least understands, murder for love.

Once in a blue moon, he meets a fellow traveler, his professional and spiritual peer. One of them is the small-town sheriff in The Lady in the Lake. Another, from Farewell, My Lovely, is Red Norgaard—“probably the nicest man I ever met”—a de-badged cop who runs a boat from the dock in corrupt Bay City.

When Marlowe and Red get to the casino boat, Red knocks out a “short dirty wop,” gently lowers him to the deck, tears the guy’s purple shirt into strips, neatly binds and gags him, and is careful to put the guy’s glasses in a safe place where he can find them when he comes to.

In 2015, Chandler got a star on the Hollywood Walk of Fame, one of the few writers to have been so honored. The date for the installation has yet to be set but I, for one, hope to be there, paying homage to the man who created arguably the best fictional character ever to come out of L.A., and some of the best dialogue ever written, period.

In Philip Marlowe, Chandler embodied our seemingly doomed hope that goodness and truth will win out in the end over corruption, meanness and lies.

He nailed the love we feel for our old, lost, shabby crook town.

And anyone who’s ever ditched work to drive out to Malibu and nurse a broken heart will feel a catch in the throat at the last lines of Farewell, My Lovely:

“It was a cool day and very clear. You could see a long way–but not as far as Velma had gone.”