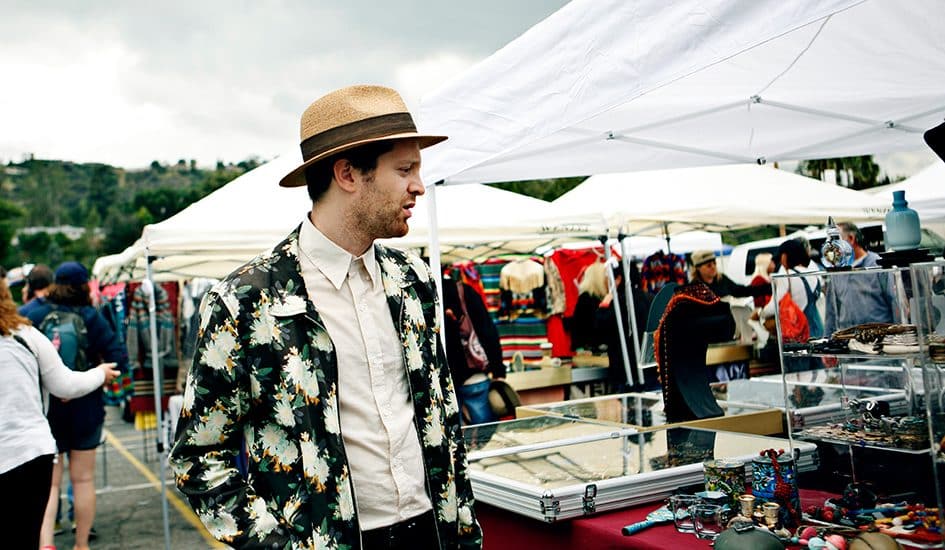 If you believe, as I do, that everyone should own at least one battered tin peacock-green bread box, or a chipped enamel coffee pot of robin’s egg blue, then the Rose Bowl Flea Market is your place.

Held every second Sunday of the month at Pasadena’s Rose Bowl, the event bills itself as the most unusual flea market in the world.

There are booths specializing in everything from hand-embroidered vintage hankies to punk T-shirts to scissors. There are rugs, Roseville pottery, antique typewriters, sewing machines, and record players. There is patio furniture galore: wrought iron plant racks, filigree benches, café tables. There are made-to-order mid-century modern sofas and people who deliver.

My first Sunday there I bought a huge potted agave for five bucks, a Heywood-Wakefield buffet server for $150 which included delivery to my new nearby apartment, and an iron-and-rustic-wood table for $80, which also included, or was supposed to include, delivery that very night.

“Oh mija,” the elderly vendor I’ll call Maria explained when she called the next morning, “we were so tired Sunday then Monday I had to take Jack in for his dialysis. I’ll bring it by Tuesday, I promise.”

Tuesday came and went. “Mija, forgive me, my sons are coming home for Christmas, first time in years. I’m preparing their room. I’ll bring the table by Thursday morning, early, look for me.”

Thursday she didn’t show up either. When I called, Jack hung up on me and Maria texted later, “My son has Stage 4 cancer. Would Saturday be okay?”

“Are you kidding me?” I thought. “Why, this old lady is trying to rip me off!”

Trusting soul that I am, I hadn’t bothered with any cold, hard item like a receipt. I had Maria’s first name and two phone numbers but that was it. So I went to the Rose Bowl website and found the form for a general e-mail. “I don’t want to rat anyone out, BUT” I began, told my tale of woe, and shot it off, thinking, Like I’m going to hear back.

That night I received a voicemail. On my telephone. From an actual human being. The message was from a guy named Dennis at the Rose Bowl Flea Market. “I’m in tomorrow,” he said. “Give me a call.”

So I did and we had a nice chat. Dennis told me he would need a last name as they have 2400-plus vendors. We agreed the best thing I could do was to sit tight and hope for the best. I could always go back to Maria’s booth the next month. Plus, as I told Dennis, I was so heartened by his personal, prompt response that I barely even cared about the table any more.

Meanwhile he agreed to talk a bit the next week about the Flea Market itself. Well that is nice for a guy who volunteers to answer the phones, I thought. When we spoke again, I learned that Dennis’s last name is Dodson and that he is the Chief Operating Officer of the R. G. Canning Rose Bowl Flea Market.

“I grew up in Maywood, Bell High School, Big Ed Roth and George Barris and Eddie Martinez and all the guys who built custom cars. We were fascinated by cars. I met Mr. Canning through being in car clubs during the 60s and 70s.We started doing car shows that pulled tens of thousands of spectators.”

In 1964, Dennis was drafted, went to Vietnam and returned. “Then in the late 60s one of the guys got into antiques. “He said, ‘Let’s go up to the Rose Bowl. Let’s see if they’ll let us put on a little flea market.’ ”

So they approached the City and sold them on the idea. Back then, vendor spaces were $3.50 and admission was 75 cents. “We didn’t make any money in the early years. We were like artists and we were just having fun.”

Nowadays, Dennis is the chief guy “out on the ground” who talks to customers, vendors, staff. “Mr. Canning has these big signs on the wall: ‘Customers pay wages.’ Without people, you don’t have a business, and you don’t have a job.”

Booths—New and General Merchandise, Vintage, Antiques, and Arts and Crafts—surround the stadium and spill into the adjacent parking lots. Parking is free. Special Preview VIP tickets, sold from 5 am to 7 am, are twenty bucks. The price graduates down from there to $8, which gets you in from 9 to 3.

“One female vendor who’s been coming for years says that if she doesn’t make seven, eight thousand on a Sunday, she considers it a bad day. There’s a guy graduated Harvard who says he makes more selling at the Rose Bowl than he could with his degree.”

Among the people-watching, the great finds, and the friendly dickering, in other words, everyone makes out at the Rose Bowl.

By the way one morning soon after talking to Dennis, I went out to run some errands. When I returned the rustic wood table was sitting in my driveway.

Maria had come through after all.

One Reply to “THE ROSE BOWL FLEA MARKET”