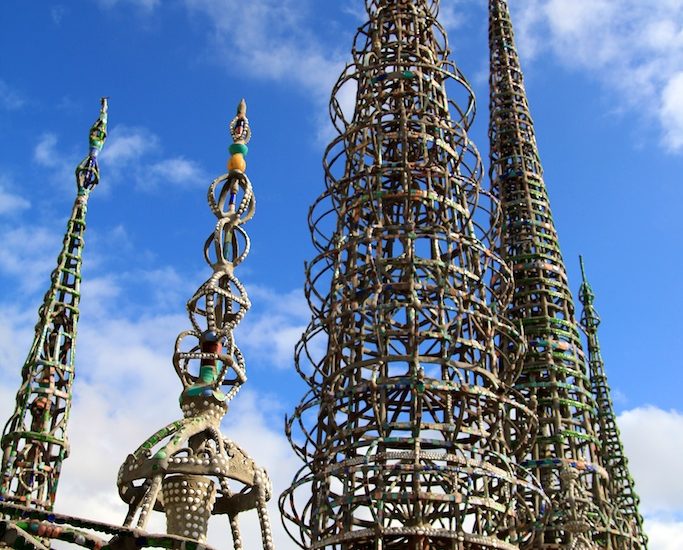 Mystery surrounds L.A.’s Watts Towers, starting with the name of the passionate visionary who built them–Simon Rodilla, Sabato “Sam” Rodia, Don Simon?—and continuing to his exact whereabouts from 1910-1918, the number of years he worked on the towers (33 or 34?), and the forces that drove him.

He worked the coal mines in Pennsylvania until a mining accident claimed his brother, then made his way to Seattle where he married and had three children. The marriage collapsed in 1912, possibly due to Rodia’s then active alcoholism. After working as in itinerant day laborer for several years, he migrated to Los Angeles and bought a wedge-shaped piece of land in the working-class neighborhood of Watts, near the railroad tracks.

He began his masterpiece in 1921. He was 42. Working alone nights, weekends and holidays, for the next three decades he constructed a series of slender steel columns, the tallest 99 feet, wrapped them with wire mesh, and covered them by hand with cement.

The structure of the towers—ascending concentric circles, evenly-spaced and narrowing as they climbed higher—made for the rungs of a kind of ready-made scaffolding.

From the highly-recommended video by Billy Hale you can watch pre-tour:

“There was…a dream. Of vast structures…Every day, every moment, outside his work for a living, in the light and the darkness, Sam Rodia labored to express the dream.

“With seashells, broken bottles, shattered tiles, with the discarded, the unwanted, the useless, with the debris of the machine-ridden civilization he avoided…with steel girders, with wire mesh, with concrete, with a bucket, a shovel, a hammer, a chisel, and with his two hands, Sam Rodia built, inch by inch, the huge and complex structures that look down from their heights upon the plain.”

From the shot of those hands, they could have been tree trunks: gnarled, calloused, hardened as trowels.

Rodia sometimes stayed up all night pondering his design, his dream.

The towers comprise 17 structures and can be viewed at leisure, if somewhat from afar, through the chain link fence that surrounds them.

For a closer look, you can choose a roughly thirty-minute tour that starts roughly hourly Thursday through Sunday, the pace of which does not promote quiet contemplation.

From the commentary: “The towers as well as the gazebo are modelled on the ship of the Italian explorer Marco Polo… Rodia built each tower by digging a shallow trench, filling it with cement, and embedding four upright metal columns…He used a variety of recycled materials to reinforce his constructions, working this metal using the railroad tracks near his property to bend it into the desired shape.”

Legend has it that Rodia sometimes walked the whole 20 miles to Wilmington along the railroad tracks, looking for shards of the pottery, colored glass, and glazed tiles he embedded in wet concrete to adorn his creation, a technique known as pique assiette. He also used seashells, tools, faucet handles, heating grates, and chips of mirror.

Rodia named his completed installation Nuestro Pueblo—Our Town—spelling the phrase out in glass pieces and inscribing it directly into the mortar.

The chain of ownership in the ensuing years became complex. The City of L.A.’s Department of Cultural Affairs now manages the conservation and tour program. The Watts Towers are one of only nine folk art sites on the National Register of Historic Places. In 1990, they were also designated a National Historic Landmark and a California Historical Landmark. Restoration is continual and ongoing.

The adjacent Watts Tower Arts Center opened in and has been serving the community since1970.

You can see why visitors need to be hustled through. For stability, Rodia constructed more than 150 flying buttresses: support beams that help distribute the weight of the structures evenly to the ground. A demolition order issued by the city of L.A. was cancelled after a stress test proved that the towers were able to withstand 10,000 pounds of pressure.

Still, the towers are fragile. Touching, pressing, leaning from even small numbers of people would be disastrous. Interior corrosion that preservationists at first took to be the result of earthquake damage instead turned out to be from rust. Restoration is continual and ongoing.

In 1954, at the age of 75, Rodia suddenly stopped working, deeded the property to a neighbor and moved to Martinez, California, never to return.

He lived in a “ramshackle boarding house” near his sister and depending on which account you happen upon, either spoke of the towers to anyone who would listen, or largely refused to speak of them at all.

Likely illiterate, Rodia signed his life’s work with the imprint of his hands and his initials.

“I had it in my mind to do something big—and I did.”

One Reply to “THE WATTS TOWERS”