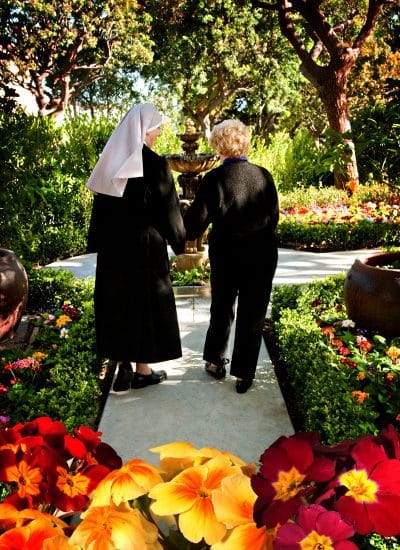 In 1839, Jeanne Jugan opened her home to an elderly blind woman in France. The order known as The Little Sisters of the Poor was born.

In 1905, the Little Sisters opened a home in L.A.: St. Ann’s in Boyle Heights. When St. Ann’s was threatened with closure due to expanded fire safety requirements, the Sisters began praying to St. Joseph for a new place.

Soon after the Archdiocese, under Cardinal Manning, gave the Sisters a chunk of land in San Pedro, high on a bluff overlooking the Pacific.

And in 1979, the Jeanne Jugan Residence opened. Currently, the home boasts are nine sisters,110 residents, and three levels of care: independent living , assisted care, and skilled nursing. The requirements are simple: you have to be 65 or older, and with few financial resources.

After an 11 a.m. weekday Mass in their chapel recently, three of the Sisters told what the work means to them.

Mother Margaret made her final profession 55 years ago in Ireland, Sr. Isabel from Colombia has also been a sister for over 55 years. Sr. Paul from Detroit will celebrate her jubilee in 2016. Two of her blood sisters are also with the Little Sisters.

Unlike, say, teachers, the Sisters have their residents at the end of their life. They get to see them right before they enter eternity. They escort them.

The Sisters stay with the resident through that dying process, as they go to heaven. Night and day, a Sister is praying by the resident’s bedside.

A big consolation is that the residents tend to have such beautiful, peaceful deaths. .

When they know the end is near, all the Sisters are called. They all come for the last half hour: to sing, to pray. That’s a special privilege of their charism.

The Sisters’ faces are sometimes the last faces the resident sees on earth. He or she knows someone is watching with them, as they go to heaven.

They often find that the residents who initially fear death come to assist the ones who are dying. They’ll sit and pray with them and, little by little, those who were once afraid become more comfortable with the idea of dying themselves. They know that when their turn comes, they won’t be alone.

That last breath is God’s design, the Sisters observe. Every death is different.
Sometimes a resident having a tough time letting go will wait for one certain family member to arrive. One resident with ten children held on and on, waiting for the one son who was from out of town. It was the one she’d had trouble with, who’d wandered away from the family. He was no sooner in the room than she closed her eyes and peacefully went.

They tell the story of another resident was dying, a man with two feuding daughters. They wouldn’t come in the room at the same time. Finally one of the Sisters gently told them, “You know, he’s waiting for you two to come in together and talk to each other.” They finally did. And sure enough, the father saw that and then he died. He wouldn’t go until his two daughters came in together and talked.

Sometimes the family members are the ones who can’t let go. They have to get to the point where they can say, ‘It’s okay, Mom, I’ll be okay without you.’

We’re afraid of that last moment, the Sisters observe. We’re afraid to suffer. We’ve forgotten the redemptive value of suffering. In our culture, we want to eliminate all pain. But suffering is part of our living, of our humanity. There’s just as much value in suffering, they emphasize, as in the productive working part of our day, or lives. The smallest ache is never useless.

The sisters beg. That, too, is part of their charism. St. Jeanne Jugan, their recently-canonized Mother Foundress, went out collecting every day for “our poor.” They used to go door to door, but “people aren’t home any more.” So every day a pair of sisters goes to grocery stores, restaurants, bakeries. They ask for food, money, whatever they can use for the residents.

Sr. Isabel has a walker, Sr. Paul leans on a cane. They work 16-hour days. The Sisters have missed their lunch, been on their feet for an hour, are headed into an afternoon of more pastoral care, of work, of time before the Blessed Sacrament.

As I leave, the paramedics are pulling up: a resident has a medical emergency. Mother Margaret and Sr. Paul charge outside and stride purposefully down the walk, white veils streaming. The last thing I see as I drive off is their two heads, bowed over their charge.

“Take good care of the elderly,” said St. Jeanne Jugan, “for it is Jesus Himself you are caring for in them.”

One Reply to “THE LITTLE SISTERS OF THE POOR” 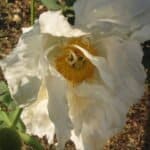