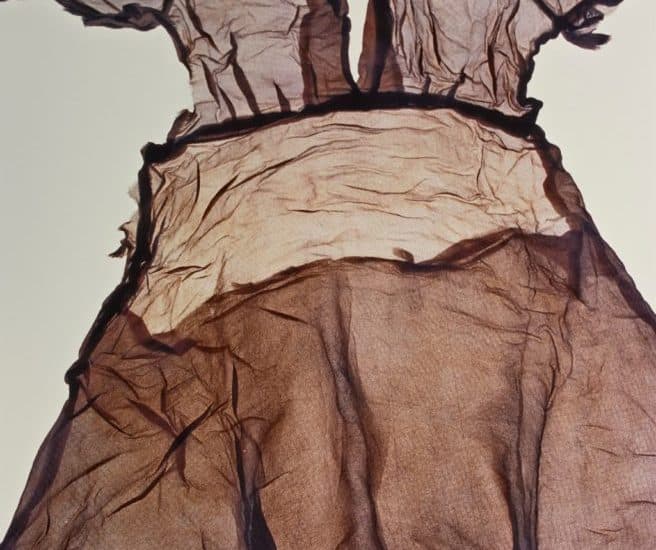 ISHIUCHI MIYAKO’S “POSTWAR SHADOWS,” NOW AT THE GETTY, FEATURES PHOTOGRAPHS REFLECTING ON THE REALITY OF LIFE AFTER NUCLEAR WAR. THE SHOW CULMINATES WITH PHOTOGRAPHS OF PERSONAL EFFECTS, INCLUDING GARMENTS, WHICH HAD BEEN IN DIRECT CONTACT WITH THEIR OWNERS’ BODIES AT THE TIME OF THE BOMBING. (ISHIUCHI MIYAKO)

August 6 of this year marked the 70th anniversary of the first atomic bomb dropped by the U.S. on Japan, at Hiroshima. Nagasaki followed on August 9.

General Leslie Groves, director of the Manhattan Project, testified before the U.S. Senate shortly afterwards that death from radiation is “without undue suffering” and “a very pleasant way to die.”

Belarusian Svetlana Alexievich, this year’s laureate of the Nobel Prize in Literature, paints a somewhat different picture. In Voices from Chernobyl, she writes of a woman who cared at home for her husband who was dying of radiation poisoning:

“[Tumors] crawled upward, along the body, to the face. Something black grew on him. His chin went somewhere, his neck disappeared, his tongue fell out. His veins popped, he began to bleed. From his neck, his cheeks, his ears…I’d bring a washbowl from the bathroom, and the streams would hit it, like into a milk pail. That sound, it was so peaceful and rural. Even now I hear it at night.”

At least Chernobyl was accidental.

How much American scientists and politicians knew about the effects of radiation poisoning before bombing Hiroshima and Nagasaki has been the subject of much current debate.

“While the pre-Hiroshima understanding of radiation among Manhattan Project scientists was far from perfect” notes an Oxford Journals abstract of a piece by Sean L. Malloy, “that the bomb would produce lingering and lethal effects was suggested as early as 1940…The policy of compartmentalization and secrecy enforced by Manhattan Project director General Leslie R. Groves, combined with the single-minded drive at Los Alamos to build a working bomb, meant that few even inside the Manhattan Project itself were aware of, or interested in, the emerging body of knowledge on radiation effects generated during the war.”

A recent L.A. Times article reports, “In Nagasaki, newborn death rates skyrocketed in the nine months after the bombing: 43% of pregnancies in which the fetus was exposed within a quarter-mile of the hypocenter ended in spontaneous abortion, stillbirth or infant death.”

And in Nagasaki: Life After Nuclear War (2015), Susan Southard explores the subject at length.

“For most of the world,” reads the jacket, “the atomic bombings represented an end to a long and costly global war. But for tens of thousands of survivors who barely escaped death beneath the mushroom cloud, their new lives as hibakusha (atomic bomb-affected people) had just begun. Susan Southard spent more than a decade researching and interviewing hibakusha and atomic bomb historians, physicians and specialists to reconstruct the days, months, and years after the bombing. Using powerful eyewitness accounts, Southard unveils the neglected story of the enduring impact of nuclear war.”

For all that, it may be a current exhibit at the Getty, “Postwar Shadows,” that truly brings the horror of nuclear war home.

Japanese photographer Ishiuchi Miyako was born in 1947. Her childhood in the port city of Yokosuka was shadowed by the U.S. military presence: brothels, Enlisted Men’s Clubs, the kind of cheap post-war housing in which she lived well into adulthood with her parents, using the bathroom as a darkroom.

The exhibit begins with the series “Yokosuka Story” (1977-78): grainy black-and-white photos of begrimed alleys, abandoned stairwells, deserted bus stops—“memories coughed up like black phlegm.” She financed the production of the prints with money her father had set aside for her wedding.

“Apartment” evokes the state of perpetual psychic homelessness the poor-in-spirit know well: shelves crammed with bedding; the shower stall that won’t come clean no matter how hard you scrub.

“Mother’s” features the homely belongings left behind by Miyako’s late mother: department-store lingerie, a scuffed pair of aqua pumps, a brush, its bristles wound with a few lonely strands of black hair.

I’d once seen an exhibit in this same space—fashion photos of fetishistically eroticized bodies and blank stares—that had told nothing of the individuals behind them. Miyako’s photos of anonymous feet, hands, and old lipsticks, by contrast, spoke volumes about the human beings behind them—and about myself.

The show culminates with ひろしま/hiroshima, a series for which, in 2007, Miyako photographed personal effects, now housed at the Hiroshima Peace Memorial Museum, “once owned by women, primarily garments that had been in direct contact with their bodies at the time of the bombing.”

A painted comb. A pair of felt slippers.

Miyako used a light box to illuminate certain fabrics, conjuring the ghost-like auras of the victims.

She often talks to the objects she photographs.

Among them, something strange happened. A middle-aged fellow viewer, a random stranger and I locked eyes.

Our hands groped toward one another, touched.

“I have a personal stake in this,” he said finally. “My father fought during WWII in the U.S. Navy. I was always taught that the war saved millions of lives. But seeing this…everything we know now about the NSA. Guantánamo Bay.”

He gestured at the photos: a woman’s delicate gold wristwatch, its face scorched; a gauzy blouse, bloodstained at both breasts; a child’s cotton jacket, the sleeve smeared black with radioactive ash.

“I don’t know any more,” he said helplessly. “Could we have been wrong?”

No comments yet
THE VICTIMS OF HIROSHIMA AND NAGASAKI