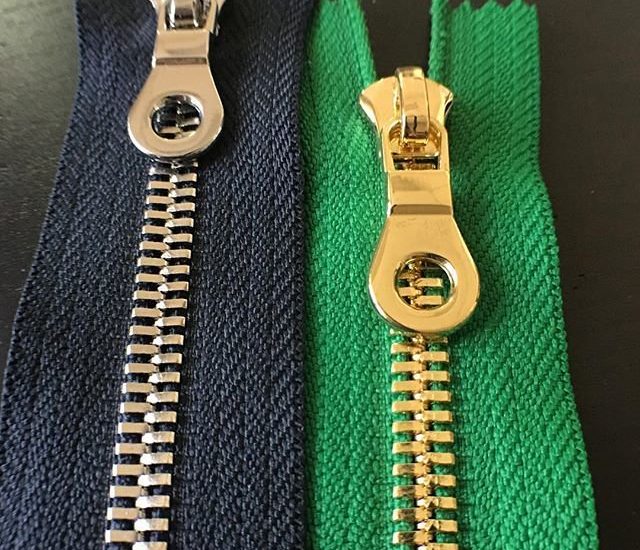 UCAN Zippers, a family-owned business near downtown L.A., is one of only four full-service zipper manufacturers in the country.

The Lais are Taiwanese-American and live in Rowland Heights. Hyrum, the youngest of three brothers, recently gave me the grand tour.

“My father started the business 26 years ago. His original distribution area was the Mountain West: Utah, California, Arizona, Nevada. He took that acronym—UCAN—for the name of his company.

“My older brother Malan and I used to work here during the summer doing inventory. Hot, sweaty, we hated it. We said, ‘We’ll never work here.’ But when Malan graduated from college, our father said, ‘Give me a year.’ Malan started as a driver, worked his way into production, and now pretty much runs the show.”

Hyrum majored in advertising. He was working at an L.A. agency when his parents set out for a year and a half of overseas mission work. “They said, ‘Hyrum, will you come over and help your brother?’”

“Zippers are great. I’ve fallen in love with driving business and with providing for the people who work with us. We have 41 employees. Some have been with us for twenty years.”

Business peaked in the mid-90s. Then zipper manufacturing began shifting almost entirely to China. The only way UCAN could compete was to scale back on manual labor and scale up on automation.

“It’s been a struggle, but LA is a large manufacturer, especially of garments and handbags. We’ll always need zippers. Our two biggest niches are that our lead time is short and we’re domestic. We really try to rally the troops and say, ‘Hey, let’s keep it here. I’m an Angeleno. Let’s support companies based here in LA as well.’”

It’s a continuous process that begins with raw zipper tape being rolled on huge, 700-yard bobbins. The dye vessels are like pressure cookers: high pressure, high temperature.” The fix for mistakes?: just like at home, they dye black.

Wet from dyeing, the tape is then run through special drums and stream-ironed.

The sliders, raw zinc diecasts, are chemically etched to make a slightly rougher surface, then painted. At a long table a man with a nose mask, buckets of paint laid out on his workspace, is pivoting, stirring, testing.

“Antonio manages three machines. There’s no computer. Everything he does is done by eye. It’s definitely a skill.”

On the right is metal production. That machine that sounds like a machine gun is actually putting teeth on the chain.

A flat brass wire—theirs comes from Turkey—is fed into the back and a die punches out the correct shape. On one side the teeth have a nose; oh the other the teeth are formed so as to interlock.

On the zipper tape is a “cord,” a narrow length-wise area of extra thickness. The machine shapes the teeth and attaches them to the cord all at the same time.

A gapping machine then prepares the tape for the fasteners. The next machine affixes a dab of heat-seal tape. The T-punch machine makes a tiny hole.

The pin and box machine consists of two rotating, open-faced cylinders, one running clockwise, the other counter-clockwise. When the machine senses the gap, it takes a pin and a box, and punches the two on in the proper configuration. Magic!

Though the process is automated, the feel is hands-on and personal. Everywhere are zippers. hanging from rafters, festooning pipes, spilling from cardboard bins.

In the lab, Hyrum observes, “Our computers date from the late ‘90s. Pentium 3 maybe. We’ll update eventually but for now, they work fine.”

“Besides, I don’t think a machine will ever be able to see and care like a human can. My father’s in a wheelchair now and he still checks in. My brother and I say, ‘Here’s Dad, he’s rolling in!’ His experience is priceless.”

“It’s also fun to see small, local business owners come in who are just starting. We’re free with our information because we want people to succeed. We’re not just a vendor; we’re a resource.”

“As we go through life we may not remember products, but we remember relationships. That’s what we’re trying to foster.”

Can a zipper—two sets of interlocking teeth—have a heart and soul? After touring UCAN, I think so.

And hear this: “What therefore God hath joined together, let not man put asunder.”