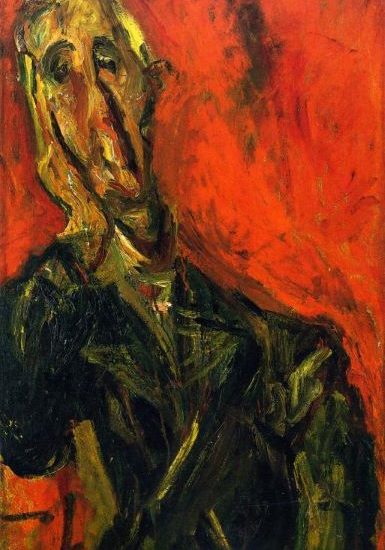 “The story of Soutine is too true to be believed,” [novelist Waldemer] George [who wrote the first serious study of the painter]. “It is a story for Charlie Chaplin,”  a Cinderella story of transformation from darkness into poverty into wealth and recognition. George felt forced to set it down, he said, so that he could place Soutine “in his exact ambiance, this ambiance of deep despair that shapes his soul.”

George described Soutine as a painter who “pushes aside all norms transgresses the limits of logic, breaks all chains, tears all ropes..what is the meaning of this art,” George went on, “whose origin is impossible to establish, that knows no law nor national influence nor guiding principles, that is not linked to any tradition? Art of exile or even barbarian art? I defy anyone to discover the line of descent of Soutine.” George acknowledged a resemblance to the work of van Gogh but denied that Soutine was a follower of the Dutch painter.

And then in probably the most persuasive words of his study, George concluded that Soutine painted without any “studies of style or plans for perfection…Each of his works looks like a hemorrhage,” the critic said. “Before portraying his soul, the painter spits out all his blood, and each rivulet of blood gives birth to a vision that is new, singularly intense, tragic and painful”…

Soutine had spent some time in the kosher butcher shop in Smilovitichi [the Russian town where he was born and raised] and kept at least one memory from those days. “Once I saw the village butcher slice the neck of a bird and drain the blood out of it,” he recalled. “I wanted to cry out, but his joyful expression caught the sound in my throat. This cry, I always feel it is there…When I painted the beef carcass it was still this cry that I wanted to liberate. I have still not succeeded.”