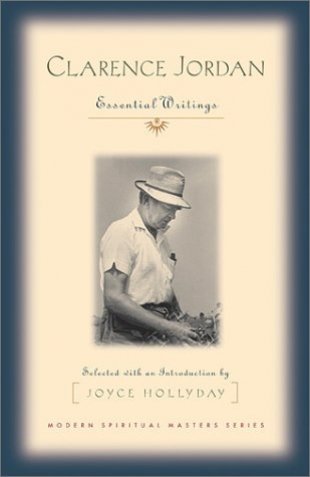 “Faith is not belief in spite of evidence but a life lived in scorn of the consequences.”
–Clarence Jordan, 1912-1969, Baptist visionary, founder of Koinonia Farm

“Following the Supreme Court’s ruling on school desegregation, (Clarence) Jordan got into serious trouble with racists and members of the Ku Klux Klan when he tried to assist two African-American students in their application to a formerly segregated business college. This led to shooting, bombings, and vandalism against the Koinonia Farm. But Jordan steadfastly refused to leave. He spoke of these adversaries as people “with their personalities twisted and warped by prejudice and hate” . . .

[From Jordan himself]: “If there is any balm in Gilead; if there is any healing in God’s wings; if there is any hope — shall we go off and leave people without hope? We have too many enemies to leave them. The redemptive love of God must somehow break through. If it costs us our lives, if we must be hung on the cross to redeem our brothers and sisters in the flesh, so let it be. It will be well worth it. To move away would be to deny the redemptive process of God.”

“[T]here just isn’t any word in our vocabulary which adequately translates the Greek word for ‘crucifixion.’ Our crosses are so shined, so polished, so respectable that to be impaled on one of them would seem to be a blessed experience. We have thus emptied the term ‘crucifixion’ of its original content of terrific emotion, of violence, of indignity and stigma, of defeat. I have translated it as ‘lynching,’ well aware that this is not technically correct. Jesus was officially tried and legally condemned, elements generally lacking in a lynching. But having observed the operation of Southern ‘justice,’ and at times having been its victim, I can testify that more people have been lynched ‘by judicial action’ than by unofficial ropes. Pilate at least had the courage and the honesty to publicly wash his hands and disavow all legal responsibility. ‘See to it yourselves,’ he told the mob. And they did. They crucified him in Judea and they strung him up in Georgia, with a noose tied to a pine tree.”

2 Replies to “CLARENCE JORDAN, ON THE 50TH ANNIVERSARY OF THE WATTS RIOTS”