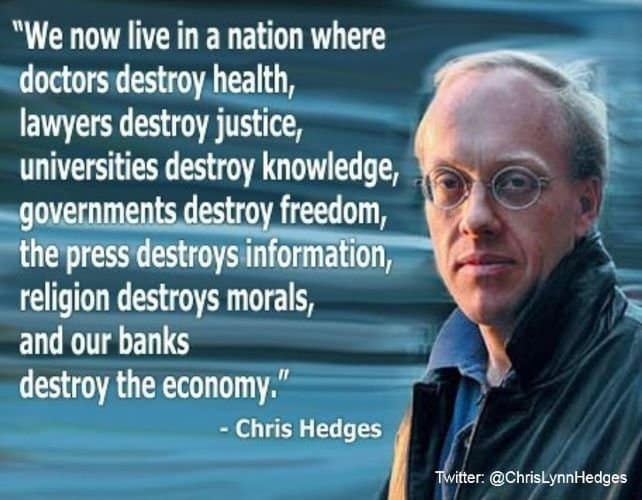 I urge you to check out the writings and youtubes of journalist Chris Hedges.

A good place to start is War Is A Force that Gives Us Meaning.

“Patriotism, often a thinly veiled form of collective self-worship, celebrates our goodness, our ideals, our mercy and bemoans the perfidiousness of those who hate us. Never mind the murder and repression done in our name by bloody surrogates from the Shah of Iran to the Congolese dictator Joseph-Désiré Mobutu, who received from Washington well over a billion dollars in civilian and military aid during the three decades of his rule. And European states—especially France—gave Mobutu even more as he bled dry one of the richest countries in Africa. We define ourselves. All other definitions do not count.”

“War makes the world understandable, a black and white tableau of them and us. It suspends thought, especially self-critical thought. All bow before the supreme effort. We are one. Most of us willingly accept war as long as we can fold it into a belief system that paints the ensuing suffering as necessary for a higher good, for human beings seek not only happiness but also meaning. And tragically war is sometimes the most powerful way in human society to achieve meaning.”

“While we venerate and mourn our own dead we are curiously indifferent about those we kill. Thus killing is done in our name, killing that concerns us little, while those who kill our own are seen as having crawled out of the deepest recesses of the earth, lacking our own humanity and goodness. Our dead. Their dead. They are not the same. Our dead matter, theirs do not.”

“ ‘The nationalist is by definition an ignoramus,’ ” wrote Danilo Kiš, the Yugoslav writer. “Nationalism is the line of least resistance, the easy way. The nationalist is untroubled, he knows or thinks he knows what his values are, his, that’s to say national, that’s to say the values of the nations he belongs to, ethical and political; he is not interested in others, they are of no concern of his, hell—it’s other people (other nations, another tribe). They don’t even need investigating. The nationalist sees other people in his own image—as nationalists.”

“Those who do defy the nationalist agenda in war are usually reviled during the conflict and shunned afterward. They are, at least by the labels placed upon them by the world, often rather humble, sometimes simple, and not always well educated. The acts defy the collective psychosis…

Many of those who defy the collective psychosis of the nation are solitary figures once the wars end. Yet these acts of compassion were usually the best antidotes to the myths peddled by nationalists Those who reached across lines to assist the “enemy” freed themselves from nationalist abstractions that dehumanized others. They were vaccinated against the cult of death that dominates societies in wartime. They reduced their moral universe to caring for another human being. And in this they were able to reject the messianic pretensions that come with the nationalist agenda. By accepting that they could only affect a few lives they also accepted their small place in the universe. This daily lesson in humility protected them. They were saved not by what they could accomplish but by faith. Such people are, however, very rare.”

3 Replies to “WAR IS A FORCE THAT GIVES US MEANING”