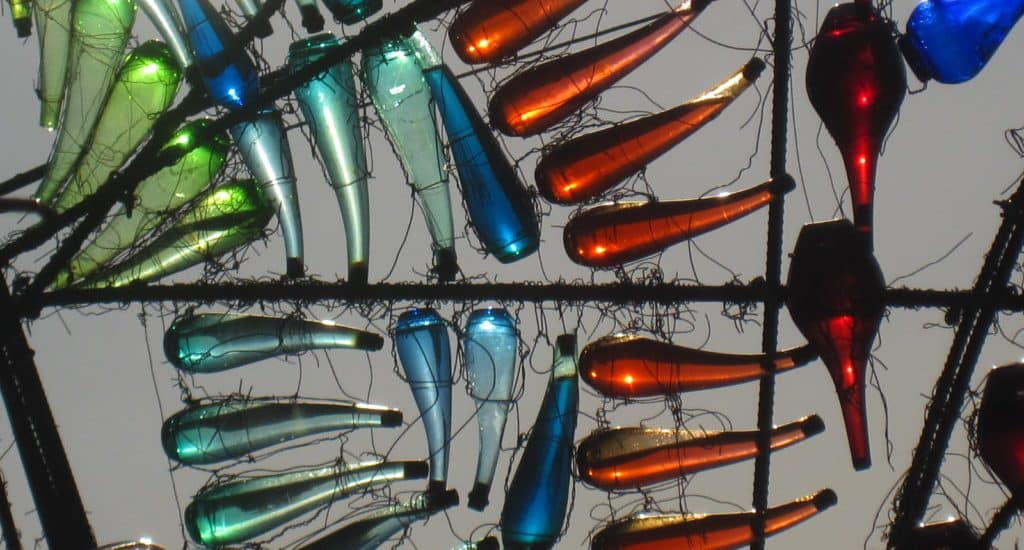 I don’t know about you, but I personally love a folk art installation, looming forty feet above the street, made of glass bottles filled with colored water that form a giant light-refracting image of the Virgin of Guadalupe.

Thus I found myself in Echo Park recently, visiting Randlett King Lawrence, creator of what he calls the Phantasma Gloria and proprietor of “Randyland.”

“Come just before dusk,” Randy had said. “That’s when the light is best.”

Randy greets me in a blue pajama-like outfit he’s hand-stenciled in a Virgin of Guadalupe motif. “At this time of day ‘Refraction is in action,’ ” he announces gleefully.

The installation is up on a hill and takes up the whole 50 linear feet of Randy’s front yard.

Light dances through, sparkles, glows. The Virgin’s wings are mostly cobalt, orange and pink. Her cloak consists of various shades of pale green, aquamarine and turquoise. A penumbra of bottles the color and shape of chili peppers surrounds her body.

“These bottles are essentially large convex lenses. Notice how you see the sky and the horizon beyond in each one—but upside down, as in a camera obscura. Take this pink one. The way the image inside is dark at the top—that’s the landscape. The glowing area underneath is the sky. And that bright spot in the middle is the sun! Isn’t that amazing? That’s how a convex lens functions.”

The overall effect is of a vast luminous mosaic. Instead of using tile, however, Randy uses bottles, vases, and fishbowls filled with colored water. Instead of grout, he uses the sky itself.

“It’s a whole new medium—a different thing on earth as far as I can tell—that I’ve discovered and just begun to explore.”

As if on cue, the sun moves a millimeter and it’s as if someone has thrown a cosmic switch. The entire Phantasma Gloria suddenly pulsates with light.

“Amazing, right?” Randy exults. “In each element of this much larger image of the Virgin of Guadalupe, an incredible light show is going on with the sun arcing across the sky in every single individual large lens. She is made up, literally, of a thousand ever-changing shining suns.”

The frame is made of 21-foot links of spring-loaded steel rebar that form a series of interlocking arches. Each bottle, stoppered with a rubber cork, is held in place by a hand-fashioned harness of 14-gauge galvanized wire.

The bottles are all teardrop shapes, different sizes. The skinny ones and the smaller ruby red ones are from Ikea. But the dream started with the cobalt blue.

“In the late ‘90’s I was a failed writer. I was in existential crisis.”

“I’d bought this drinking water from Italy, Aqua della Madonna, that came in a decorative blue vase. It was sitting on my kitchen windowsill. I hadn’t opened it yet. One morning I saw this shining bright pale blue light inside it. I thought, ‘What the heck is that?’ ”

“I put on my glasses, leaned down, and realized, by God, it was the sun itself blazing away. I could see the San Gabriel Mountains upside down! It was magical. Mt. Wilson in the background, the hills of Echo Park in the medium ground, the neighbors in the foreground: the whole vista was shrunk up in this little blue bottle. I thought Wow!”

So he went out to the yard and started hanging blue bottles from rebar rather than just sitting around being a “miserable lout.”

“I loved the Virgin of Guadalupe when I worked for Cesar Chavez and the United Farm Workers in the 70’s. She’s the patron saint of the Americas,” Randy observes. “L.A.’s named after her. She’s literally synonymous with the city itself.”

“I’m a set builder. I’m used making things happen in an unorthodox way in order to attain a certain objective.”

The first incarnation of the Phantasma Gloria, completed around 2000, was “this very fanciful underwater image.” Several intermediate stages ensued. “But the Virgin was insistent! She kept on pestering me, ‘Do it, do it! Build me, build me.’”

“The world is stupefyingly weird and mysterious and amazing. I wanted to do something truly great. It was an imperative to create something new and beautiful that would inspire awe and feelings of affection and place.”

“And we’re such intensely social creatures, we’re not whole unless we’re in communion.”

Randy met his wife, Nurhan, whose was born and raised in Istanbul, just as he was starting this project. Her name means “Empire of Light.” He took that as a sign.

“She brings such joy to my life. This whole thing is so L.A.: the climate, the light, the re-invention, the spiritual creativity. People come by all the time. I give them pictures and magnets and postcards. It’s kind of a love fest.”

“I think of the angels that one runs across every day. Gentle people, and gentle women in particular. So many of immigrant descent who make my life worth living.”

Randy gazes out over his masterpiece.

“It’s in honor of all the beautiful angels of Los Angeles.”

2 Replies to “RANDYLAND: A FOLK ART SHRINE TO THE VIRGIN OF GUADALUPE”