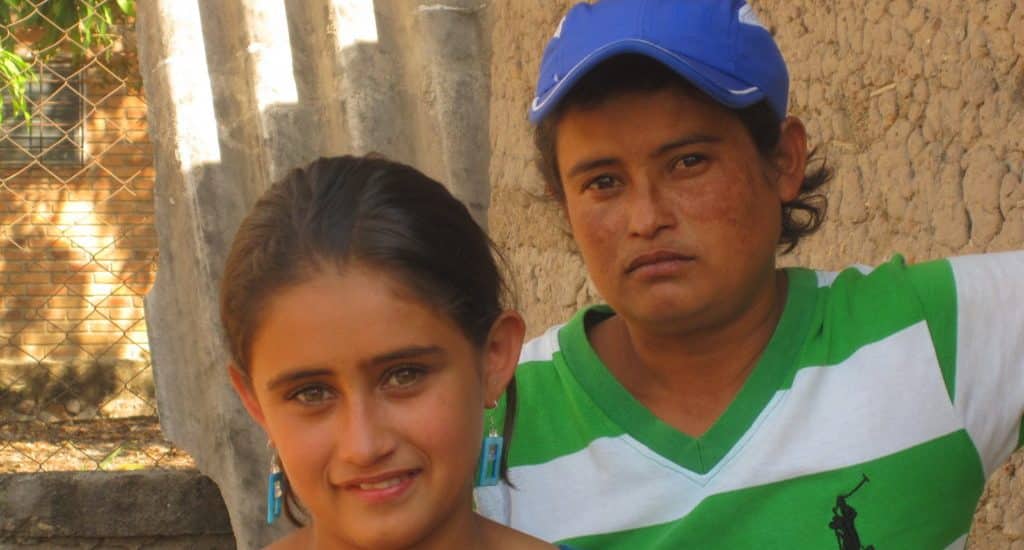 Unbound is a nonprofit, headquartered in Kansas City, Kansas, founded by Catholic laypeople who desired to serve the poor. The organization pairs sponsors with children, young adults and the elderly all over the world.

Last February I spent a week with an Unbound media awareness trip to the Honduran town of Ocotepeque.

The suffering and poverty of the Hondurans we met were profound. So were the hospitality, generosity of spirit, and courtesy.

The morning after we arrived, we visited Casa Hogar, an Unbound-sponsored home for kids, aged 5 to 18, who’ve been abused, neglected or abandoned.

We drove up in a van. The adobe building was painted welcoming colors of bright rose and gold. The doorway gave onto an arched passageway lined on both sides with children who had clearly been awaiting our arrival with such excitement they could barely contain themselves.

From the smallest in front to the tallest in back, they were beaming, cheering, waving crepe paper streamers. Strings of colorful papel picado and hand-lettered banners reading “Benvinidos!” hung from the rafters. The children reached out to grab our hands, touch our sleeves, smile a welcome.

Beneath our feet, the tiled floor was covered with a carpet of pine needles strewn with magenta bougainvillea. The effect was extraordinary: beautiful: simple, elegant.

We met the staff, several of whom themselves had come through Casa Hogar. The teachers, the nutritionists, the accounting staff each gave a short presentation. “I’m serving as I was served,” said one.

Then Henry, the director, stood. “I want to tell you about that carpet of pine needles. Do you see any pine needles on the trees around Ocotopeque?”

“Exactly,” said Henry. “It’s too hot. Those pine trees come from high in the mountains. You have to cut the branches, bring them down, hand-strip the needles.”

“That carpet is a sign of deep respect. Only one other time of year do we lay down the carpet of pine needles. We lay it down for Christ—on Good Friday.”

Later we would learn that, before coming to Casa Hogar, many of the children been molested, beaten, raped. One boy’s mother had held his fingers to the hot stove when he burned the tortillas.

The kids put on a dance program. Arlin, a special needs child, plucked the guitar as the others gathered round: touching his head, stroking his arm. “El amore es la razón de vivre”—Love is the reason to live—they sang.

We ate lunch together. Over chicken and rice I met Norma, a beautiful 16-year-old who wants to be a nurse, and her little brother Jairo, a shy boy of 8.

Afterwards, we visited with their mother, Sandra, who lives nearby. Sandra is a 32-year-old from a family of fourteen kids. Twelve—including her—are alcoholic. Six of her brothers have been murdered.

Norma and Jairo had been given permission to come, too. “Out of this ugly person came two beautiful children,” Sandra laughed, except she wasn’t really laughing. The kids gazed at her, hungry with love.

Casa Hogar is but one small part of Unbound’s work in Honduras. Over the course of the week, we visited with the families of many more sponsored children
.
We talked to men who made five dollars a week. We learned of a system so corrupt that even if the people can afford to go to the hospital, the doctors have often sold all the medicine on the black market. “The worst is when one of our children gets sick,” one mother told us. The other mothers, destitute themselves, often go out to the streets and beg in order to take up a collection.

Everywhere we went we were welcomed: a cluster of balloons, a basket of hand-made tortillas, a glass of pineapple juice.

You can sponsor someone through Unbound for as little as thirty dollars a month. I began to understand how much thirty bucks a month means to folks who can use the money for school supplies, food, medicine, clothing, a roof.

Our last morning we celebrated Mass with the children at Casa Hogar. I sat in the back beside three small boys who shared their hymn sheet, helpfully pointing to the right place so I could follow along in Spanish.

Above the altar hung a crucifix. Nailed to it was the lacerated Christ who these children knew well.

At the Sign of Peace, they circulated: smiling, touching us, thanking us, pressing their small, warm bodies to ours: these children who were being taught to give what they had not always received themselves.

“But many who are first will be last; and the last, first.”

.We should have laid down the carpet of pine needles for them.