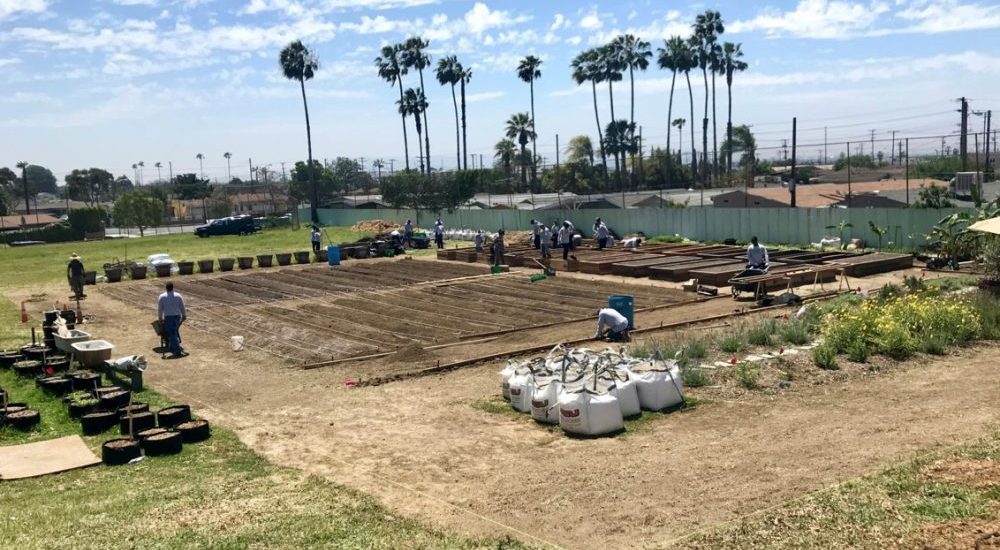 Erika Cuellar, 29, and Richard Garcia, 35 are the heart of the project Erika grew up in South L.A. Richard was raised in the Hollywood area in a devoutly Filipino family.

Richard’s house on Alma Avenue, beautifully landscaped with trees, native grasses and trees, doubles as the organization’s headquarters. We sit down with a cup of tea in back. The adjacent vegetable garden features cauliflower, eggplant, Swiss chard, kale, onions, and fennel—“the butterflies go crazy for it.”

As a seminarian (he’s since left), Richard worked with local priest Fr. Mike Kennedy to help establish a Restorative Justice Initiative. “Classically, restorative justice would be a face-to-face interaction healing with an attempt made on the part of both the offender and the victim. We were facilitating retreats in prison in the Ignatian tradition, giving a name to the contemplative experience that already existed among prisoners.”

Erika earned her B.A. at LMU. “Jesuit spirituality transformed my life immediately freshman year. I realized that regardless of where I came from, whatever I did had a direct impact on the world.”

As an undergrad Erika began to work at Dolores Mission in Boyle Heights where Richard happened to be youth minister. “We began to bridge the gap between one Jesuit institution and another in two very different communities.

They both began working at Homegirl, the downtown café that grew out of Fr. Greg Boyle’s work with former L.A. gang members.

“When you’re working with youth, it’s a lot more intense than Martha Stewart.
But the economy of salvation isn’t effective. It’s transformational. It breaks us upon to meet Christ.”

They began to experiment with growing food to use in the restaurant, availing themselves of an on-site garden plot and another at Dolores Mission. They involved the homegirls, both in growing the food and caring for the kids.

They noticed what took place when women and men were growing food. They saw people coming out of prison in higher numbers than ever. They thought maybe they could help bring people who’d been incarcerated closer to God; to the realization that their lives matter.

“We felt the fire in our hearts,” says Richard. “That’s where we came together to take this dream a little further.”

“Theologically, “we try to expand the principles of restorative justice. The idea of interdependence, that my good is wholly dependent on our good, is key to re-entry from prison.”

The majority of the people they work with have been doing life sentences, so a minimum usually of 25 years. They try to encourage interaction. You don’t know how to interact with this kid who’s been locked up? Why not give agency back by growing fresh, hyper-local organic produce that will likely be consumed within 15 miles of where it’s harvested? Why not give agency back by encouraging former prisoners to develop relationships with local restaurant owners and chefs?

They started out by recruiting private homeowners to offer their backyards.

“As a budding organization,” says Erika, “we have to be very wise with limited resources. Coupling that with having to develop a workforce that, say, probably doesn’t have a driver’s license, or people skills. On the technical end, we found we were moving into larger and larger costs; insurance, for example.”

“This is a long, large lesson in patience. You have to pray. Not having financial backing and much community support makes it really difficult. But Jesus gave everything for us.”

Adds Richard: “We really depend on the Holy Spirit. He’s not going to throw us down the drain. It’s not my job to understand every bit of the plan. It’s only my job to do it.”

Their current target is to move from private backyards to re-entry homes. “With the increasing numbers of recently-released prisoners, these privately-owned nonprofit homes are a real need,” Erika observes. “They’re saying yes, we’ll provide a bed. We’ll help implement your release from prison.”

“You can plant a seed, but in a few weeks that plant will be gone without sunlight and water and care,” Erika notes. “It’s the same with people. “

Adds Richard, “Our motto is ‘Nothing goes to waste. No life, no space.’”

“Both prisoners and gardens have great resurrectional power,” says Richard. “Our goal is to unleash it.”

“We want to grow beautiful food in beautiful gardens,” Erika winds up. “We want people to know that something so good could come from a place that’s so unexpected.”

One of their favorite growers was a former gang member named Sarah. As they drove to various sites in East L.A., Richard says, “It kind of spooked her out that we were driving into ‘enemy” territory.’ But in a place where she was once seeking retaliation, this time she was there to plant life.”

Sarah looks around a garden she helped plant. “It brings me peace,” she says simply. “I haven’t had peace like this before.”