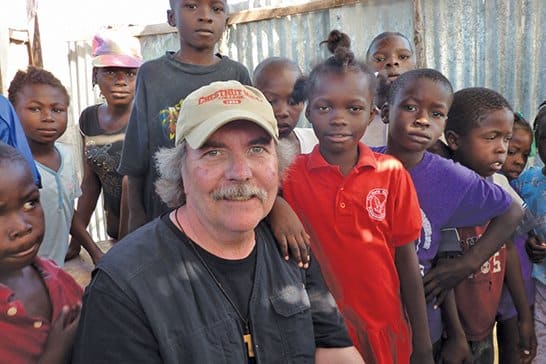 The mission statement of Pax et Bonum Communications reads: “Putting the power of film at the service of the poor.

It wasn’t always that way for founder Gerard Thomas Straub.

“I grew up in NYC. I loved the Church. I was an altar boy. When I was 12, a cousin of mine was ordained. The whole ritual—the beauty, the magic—had a profound impact. We don’t realize it but Catholicism has an element of show-biz in it.”

His first year of high school he was in a minor seminary. “The stories of Christ touched me, but I remember thinking, No-one’s really living it. We’re clawing our way to the top, just like everyone else.“

At 17, he got a job giving out tickets at the Ed Sullivan show. “I was bitten by the show-biz bug. Entertainment took the place of the Church. In 1964, television was learned from inside. There was no school of communications. I was an executive by the time I was 21.”

He spent 13 years climbing. He went from the executive side of TV to the creative. He was producing General Hospital at the height of its Luke and Laura phase.

“I had a corner office in Rockefeller Center. One afternoon I watched my name come up at the end of the show. And I said to myself, ‘Who would watch this crap?’ I think at that moment I was done.”

He wanted to know what had happened to the little boy who wanted to be a priest. He’d been attracted over the years to Thomas Merton, his one “thin connection to the Church.”

He retreated to a village in upstate New York at the base of a mountain. “I had a little apartment above an antique store and I’m spending my days reading religion and theology and history. I’m wanting to believe but my unbelief was increasing.”

At the top of the mountain was an Orthodox monastery. At first, he went up there just to hear the music. The he began to see the beauty of the lives of the monks, ordered to prayer. And they were so kind.

“I was in an immense struggle of wanting to believe, but not being able to believe. ‘Knock and the door shall be opened,’ Christ says. Well, I feel like for ten years I was knocking. Finally God said, ‘Alright already. Enough! I’ll give you one split nanosecond, which is all you can take.’ “

That nanosecond turned out to be in a church in Rome, back in 1995.

“It was an immense feeling of love. A sea of love. Everything was beyond words and images. I remember getting up and bowing before the tabernacle and feeling electricity. Something was happening that was not normal.”

Since then, Straub has gone on to write several award-winning books, among them Thoughts of a Blind Beggar and The Loneliness and Longing of St. Francis.

He’s traveled around the world: East Africa, Honduras, L.A.’s Skid Row. He’s made 22 documentaries about the traumatized, the war-torn, the hungry.
He’s given hundreds of “Poverty & Prayer” presentations.

His current hope is to open the Santa Chiara Children’s Center in Haiti with his wife Ecarlatte, whom he met there while filming the devastation after the 2010 earthquake.

Straub dates his spiritual transformation to that moment at a Franciscan church in Rome. But as I listen to him tell his story, it’s clear the seed was planted long before.

“During the years of my unbelief, I knew an elderly Franciscan friar. I saw him a couple of times a year and we talked about God. He had a deep concern for me even though I couldn’t believe in God.”

“I used to see an elderly couple in my neighborhood, a guy who always used to walk with his wife. One day there was no wife. I went and investigated and she’d been put away somewhere. The guy was incredibly sick inside the house, and I started caring for him. The old man was a bigot from the South. I found some Social Service to help me, and the lady who came was a black woman. I thought, ‘Oh no.’ So I told her, ‘Listen, Roy’s just a sweet old man but he’s a real racist and I think it just comes from his cultural thing in the South.’

“So I took her hand and I walked in and I had Roy on the couch on the living room. I said, ‘Roy, this is my friend,’ and I put their hands together. And Roy looked up at this woman and he said, ‘Any friend of Gerry’s is a friend of mine.’”

“It was quite a moment. Roy eventually died. I was at lunch shortly afterward with Fr. Reginald. He was going back to the friary and I was going to the Metropolitan Museum.”

2 Replies to “GERARD THOMAS STRAUB: FROM HOLLYWOOD TO HAITI”