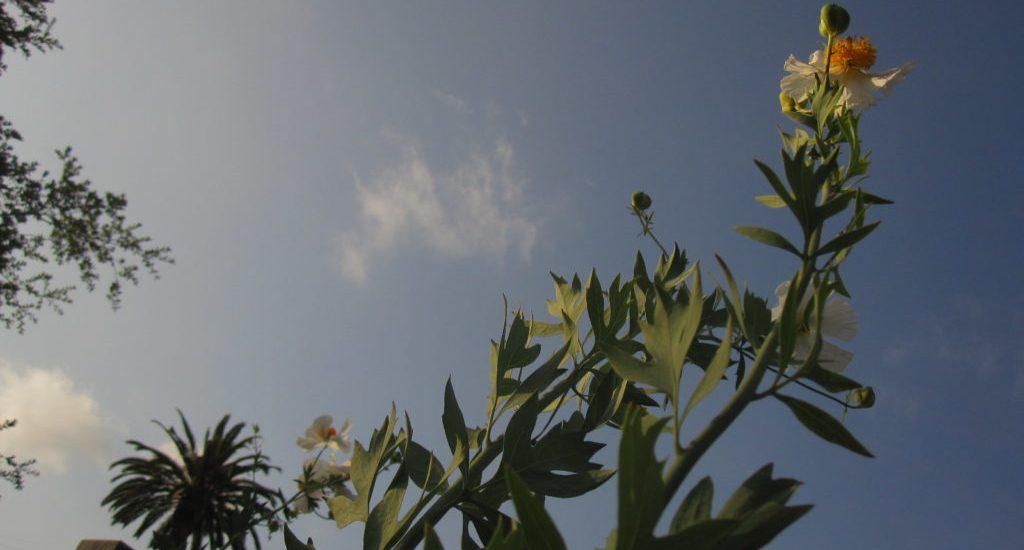 I’ve been staying in Angelino Heights for a bit, just west of downtown.

As you may know, Angelino Heights is known for its well-preserved Victorian homes, concentrated on Carroll Avenue and Kellam Street. I’ve been in a courtyard complex of more recent, though pleasingly shabby, vintage.

I love exploring a new neighborhood on foot. Mass at the downtown Cathedral is a half-hour stroll. I struck up a conversation with the guy in a wheelchair who hangs out in front of the CVS on Beaudry and bought him a bottle of anti-itch scalp spray. I remembered hearing of an urban park in the area called Vista Hermosa.

I set out on foot, crossed the 101 on Edgeware, went the wrong way and found myself in an interesting neighborhood of crowing roosters, dead-end streets, and suspicious stares. I re-traced my steps, found Toluca Street, looked south, and thought, This can’t be right.

But I kept walking and presently I came upon a wrought-iron fence behind which beckoned an oasis: a surprising expanse of grasses, native plants, flowering trees and the sweet smell of a hopeful Los Angeles spring.

“Vista Hermosa Park lies on ranch land granted by Spain in 1781 to El Pueblo de Nuestra Señora la Reina de los Ángeles de Porciúncula, the original settlement of Los Angeles,” a placard just inside the North Entrance read. “The city’s first modern land boom began when oil was discovered only one block away in 1892. Today the park returns some of the native plant communities that naturally grow in the dry Mediterranean climate of the area. Oak woodland, coastal sage scrub, and chaparral cover the rolling hillsides along walking trails, lawn areas, and picnic grounds.”

Winding paths, smelling of jasmine and sage, were shaded by overhanging trees. Secluded benches over looked the downtown skyline.

The park is part of the Pacific Flyway and as many as 350 kinds of birds might visit as the grasses, flowers and other plants mature. In time, barn owls and hawks are expected to nest in the trees, which include the Black Walnut, Bay Willow. California Sycamore, and Coast Live Oak. Native plants—among them the Pebble Pincushion, Hollyleaf Cherry, Humboldt Lily, and California Fuchsia—provide the right variety of food for both local and migratory birds, lizards, butterflies, crickets and other wildlife to live.

Skateboarders had staked out the Grotto. Families picnicked, a prayer group was seated in a circle on the lawn, toddlers cavorted, young lovers kissed.

Below, hard by the 101, was a soccer field, heated match in progress.

If you’re coming from the south, the park is just north of the intersection of Beverly and Glendale by the Bob Baker Marionette Theater. Sponsored by the Mountains Recreation & Conservation Authority, Vista Hermosa is one of many such urban parks. Others in the immediate vicinity include Franklin Canyon, Marsh Park, Elysian Valley Gateway Park.

Vista Hermosa features all kinds of walks and events including “Nocturnal Animals,” “Cooking with Photons,” (Discover how to let nature cook your food), Put A Ring On It! (Exploring Saturn), Little Nature Explorers (For 1 to 5-year-olds), and Turn Over a New Leaf (as Goethe once observed: “Everything is leaf.”).

It was Mother’s Day weekend. I decided to come back the next afternoon for a “Springing Up Wildflowers” walk.

I learned that the laurel sumac is nicknamed the Taco Plant because its leaves are shaped like hard-shell tacos.

I learned that back in the day the California sagebrush was also known as Cowboy Cologne.

I learned that sycamore leaves, which are large and soft and look like hands, are your “go-to” in the woods for a natural toilet paper.

I learned that Salvia, the generic name for sage, comes from the Latin word meaning “to heal” and has the same root word as “salvation.”

And before turning to leave, I was reminded that there is always a pair of unseen hands, caring for and loving, behind any place of beauty.

I looked around one last time and breathed deeply. “This place is so clean and well-tended,” I told the two young park rangers. “It really makes a difference.”

In unison, they chimed: “That’s Lorenzo.”