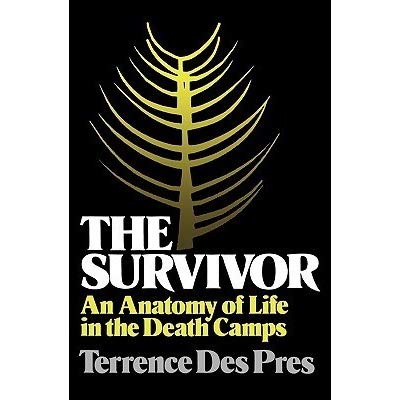 A book that deserves to be better known is The Survivor: An Anatomy of Life in the Death Camps (1976). The author, Terrence Des Pres (1939-1987), was an American writer, Holocaust scholar and professor at Colgate University.

In chapters with such titles as “Nightmare and Waking,” “Radical Nakedness,” and “Excremental Assault,” Des Pres describes the psychological and spiritual torment endured by the inmates of the Nazi death camps.

Upon arrival, every inmate underwent an almost complete disintegration of personality. Those who survived came to accept that they were in fact awake and not dreaming, and adopted as their mission to figure out how to continue living for the next minute, hour, day.

“With the return to consciousness came a feeling of intense decision.”

Lone wolves, as in “real life,” didn’t make it. The inmates instinctively formed alliances, communities, friendships. They exchanged gifts—a piece of string, a bite of potato. A Treblinka survivor observed: “In our group we shared everything; and the moment one of the group ate something without sharing it we knew it was the beginning of the end for them.”

Krystyna Zywulska, a survivor of Maidanek, was charged with “card-filing” the incoming prisoners.

In I Came Back, she wrote:

“I thought of my arrival and my first impressions of the camp. I knew that a person coming to a camp was afraid of everything and everybody, that she was distracted and terrified. The first word was so important. I decided to be patient, to answer all questions, to calm them and give them courage. My life began to hold meaning.”

“[F]rom the instant when I grasped the motivating principle…it was as if I had been awakened from a dream…I felt under orders to live…And if I did die in Auschwitz, it would be as a human being. I would hold on to my dignity. I was not going to become the contemptible, disgusting brute my enemy wished me to be…And a terrible struggle began which went on day and night.”

Personal hygiene was out of the question, for example, but many inmates grasped that their very lives depended upon at least making the gesture. They tore a tiny swatch from their coarse striped uniform, dipped it in the filthy water, and went through the motions of grooming themselves—after which the “washcloth” was rinsed out and secreted away for the next day.

Des Pres never stoops to sentimentality. Many vicious, cold-hearted inmates survived as well. Self-pity had no place in the camps. Once people died, they were not spoken of again. Moral dilemmas that in the outside world would be unthinkable were the inmates’ daily lot. Almost every survivor did things in the camps that he or she was ashamed to speak of later.

Still, a Treblinka survivor, quoted by journalist Gitta Sereny in Into that Darkness, observed:

“[I]t wasn’t ruthlessness that enabled an individual to survive—it was an intangible quality, not particular to educated or sophisticated individuals. Anyone might have it. It is perhaps best described as an overriding thirst—perhaps, too, a talent for life, and a faith in life.”

In Smoke Over Birkenau, Seweryna Szmaglewska asked: “[W]hen there is no help, no care, no medicine—whence comes this magic will to live?”

In perhaps the most beautiful passage in the book, Des Pres responded:

“There is a power at the center of our being, at the heart of all things living… already we can grasp some part, at least, of what the survivor’s experience reveals: that whether felt as a power, or observed as a system of activities, life is existence laboring to sustain itself, repairing, defending, healing.”

The Survivor could only have been written by a man of profound intelligence, conscience, and heart. That Des Pres committed suicide several years after the book was published makes for a profoundly tragic coda.

“And as for an ethic based on selfless love, that dream cost two thousand years of misery, and like ‘faith in humanity,’ came to its end in Auschwitz, in Hiroshima, in the forest of Vorkuta”…

The notion that the death camps marked the death of Christianity is the one place that Des Pres and I part ways. It seems to me that Christianity, far from dying, was lived out in the camps to its farthest reaches.

Those eyes that are not quite yet dead—that refuse to die—are not proof that God is dead: they are the light that shines in the darkness.

Those festering feet, still torturously, slowly, plodding are the feet Christ washed the night before he died.

That emaciated human being in rags and dirt with the heart to share her last morsel of potato is the Person the disciples met on the road to Emmaus.

“They knew him in the breaking of bread.”