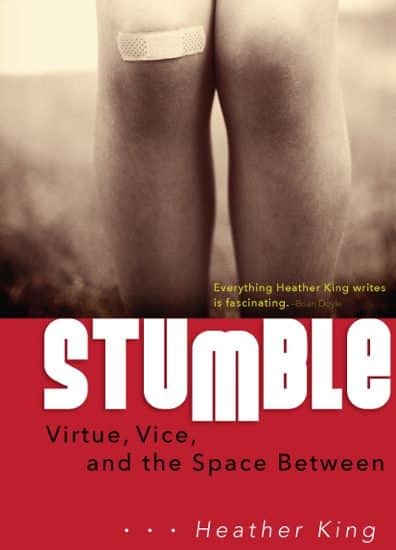 Stumble: Vice, Virtue and the Space Between is the title of my new book.

Here’s the Foreword by the writer and editor Brian Doyle:

“Listen, my friends, we have all read forewords that are fluffy or pompous or inane or insipid or pap or mere lists of the ingredients in the text to come. I refuse to write that sort of piece for Heather King, because Heather King is the most honest blistering succinct emotionally-naked blunt writer in headlong bruised pursuit of the holiness of Everything That Is that I know, and I am an ink-junkie who reads ravenously looking for writers that tell it real, that say real things with passion and humor and a healthy dose of raw humility.

If this was another kind of foreword I would use interesting prickly words here like alcoholic and barfly and divorced and breast cancer and you would conjure up a certain idea of the terrific essayist Heather King. And you would be right, I guess, for all those words are true enough about Heather. But you would also be utterly totally completely wrong, because all those words are not definitions of the terrific honest observer and storyteller Heather King; they are places she has been, parts of her, but there is a roaring urge for witness in Heather’s work that makes all those interesting thorny words mere signposts along her tumultuous road.

Why should you read this book? Because Heather King writes the kind of sizzling tart prose that Flannery O’Connor did. Heather King keeps trying to punch through the mere religiosity of Catholicism, and get down to the wild illogical unreasonable nonsensical furious genius of it, like Andre Dubus did. Heather King, like J.F. Powers and Ron Hansen and Alice McDermott, hands you bruised people trying with all their motley might to listen to the revolutionary message of the Christ and live by its awful implications.

Heather King would be an unforgettable character in a glorious novel by Mary Gordon about a brave wisp of a woman trying, against all sense and reason, to witness the One in every moment, and to live in the ferocious flame of the Love, and hold fast to hope and mercy in a world of blood and rape, except that Heather King is real, and in the ancient tradition of the essay she uses herself as reporter, as wick, as prism, as muddled guide through the dimness between us and the Coherent Mercy.

Why should you read this book? Because there are pieces and passages in here you will never forget, and they are brutally honest, and funny, and searing, and they will remind you that we are all on the suffering road, holding hands as best we can.

Also I think that if you, like me, have the slightest belief, deep in your bones and way past sense and reason, that there is a roaring Love, that there is a vast Mercy, that there is an inexplicable Imagination that breathed everything into being and set the stars to spin in the void, that there is a Force filled with fire and unquenchable tenderness, that the gaunt Jewish mystic who walked this dust two thousand years ago told no lies and Love is the law, then you should read this book, and then go read the rest of Heather’s essays. They are not only fine pieces of prose carpentry; that’s an easy compliment. The bigger and better compliment is that they are some sort of naked artless prayer, stories of a desperate brave relentless search for ways to crack the ego and walk into the light, to shed masks and disguises and habits and greed, and reach, shaking with fear and awe, for the miraculous Love everywhere available, if only we can find the humility and imagination and cheerful defiant courage to see it and sing it.

Which Heather does, in tart and wonderful ways. See for yourself.”

Brian Doyle is the author of many books of essays and fiction, among them Mink River and Leaping and Grace Notes.

Thank you for supporting his work, and mine.

3 Replies to “MY NEW BOOK: STUMBLE”