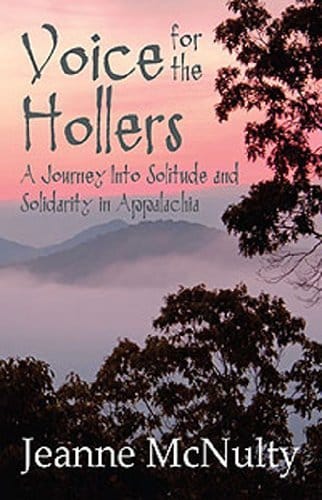 The Holy Father has decreed 2015 the Year of Consecrated Life. That gives me a chance to write about a woman who has helped to shape and sustain my own prayer life.

For thirty-nine years, Jeanne McNulty has lived in a ‘holler’ (hollow) in Spencer, West Virginia: praying, embracing a simple lifestyle, gardening, gathering firewood and reaching out to some folks in her rural county by nursing the sick in their homes.

There are small hermitages in the woods there where folks, including me, for a small donation have come to spend time in deep solitude, take long walks, or sit quietly in the straw bale chapel which houses the Blessed Sacrament.

Jeanne is a member of the Order of Consecrated Virgins (canon 604) and a Secular Franciscan.

Born in Pittsburgh, she was raised a cradle Catholic. She underwent a faith crisis in her last years of high school. “I wasn’t at peace within myself. The only thing I knew was to sit still for long hours before the Blessed Sacrament. There a great calm spread over me. I really felt the presence of Christ, who seemed to say in my inmost depths, ‘I want you.’ ”

A short time later a book came into her hands: The Perfect Joy of St. Francis by Felix Timmermans. “The sense of Francis’ freedom, his gaiety, his embracing of Lady Poverty enthralled my spirit and I longed to follow his example.”

After high school she entered a convent of Franciscan sisters in Pittsburgh but when the time came for her vows, she couldn’t go through with them. “I so loved the sisters but we were not really poor or working with the poor and there was little time for silent contemplative prayer.”

Three months later she entered the Poor Clares. “They had a simple life of poverty and there was more time for prayer. My spirit was disquieted because the schedule was too regimented to allow for longer periods of contemplation. In my early teens, I would go into the woods near home and just sit for a long time alone with God. I am very grateful to the religious sisters I lived with and for the training I received because living a religious life takes discipline. Eventually my Capuchin spiritual director felt called to dub me a ‘misfit with a unique vocation.’”

After leaving the cloister and returning home she lived alone in a ghetto in Pittsburgh. Her small apartment was close to a Franciscan monastery. Here very early mornings and evenings were free for hours of meditation, Mass, and the Liturgical Office of Morning and Evening prayer. Most of the daytime hours were filled with work, nursing, study, and involved with the nearby underprivileged children.

In 1972 she moved to Armitage St. in Chicago where Franciscan friars, religious sisters and lay folks known as The Gospel Family lived, prayed and worked at part-time jobs among the poor. They took their inspiration from the Gospel, St. Francis and Catholic Worker Dorothy Day who came to visit them each year.

After four years in Chicago, Jeanne was drawn to deeper silence. She wrote a hermit sister in West Virginia who suggested that she come for a visit and discernment. A few months later Jeanne was on the road.

“I left Chicago in 1976 and drove to West Virginia in a little Chevy Vega with about a hundred dollars in my pocket with no job and no place to go. The bishop wanted to see me. I was frightened to tell him I might have to be a beggar at first. He waffled for a bit, which seemed like eternity, but finally he said. ‘Who am I to stop the spirit of the Lord? Go ahead.’”

She found her way to the town of Spencer. She begged. She cleaned houses. One morning her pastor said: “There’s a little cabin down on a dirt road a few miles outside town. It’s not in very good shape but they need someone to live in it; to keep it up.” “That’s how it all started. The spot was a perfect fit. I felt at home at last, with time for deep solitude in the womb of nature, but close to enough to reach out to my brothers and sisters in these hills.”

She’d hoped for others wanting this type of life to join her. Instead, “I found folks come here to the hermitages with a deep hunger to be alone with God, away from noise and to discern His will in their lives.”

Her Act of Consecration to the Order of Consecrated Virgins took place in 1995 under Bishop Bernard Schmidt in the St. Clare Chapel on the property. “The bishop had to duck under the clothesline with his mitre to get to it,” she chuckles. The life of the consecrated virgin fits her more than the hermit life. “I need time in solitude but I also need to be out with the poor.

The Holy Father’s new Apostolic Exhortation, Evangelii Gaudium, is a treasure. You know what? They found him sneaking out at night to the poor of Rome! It’s just amazing.”