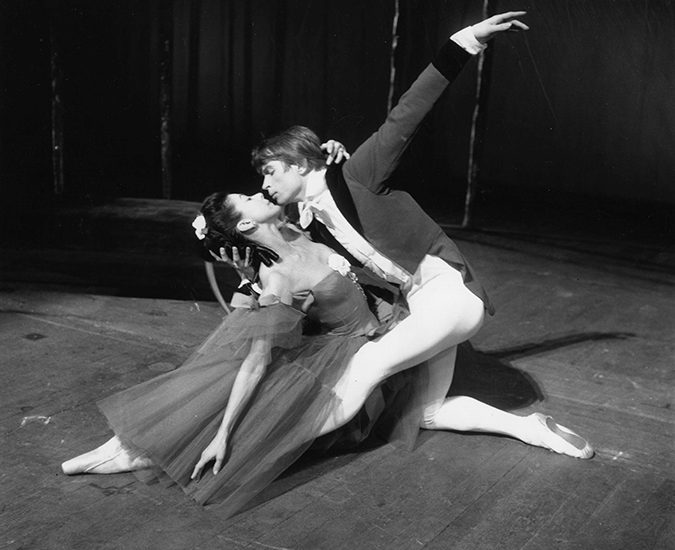 Tony Palmer’s documentary “Fonteyn” is a fascinating take on one of the greatest ballerinas of all time.

“This is the story of how the most famous dancer England ever produced was deceived and betrayed by those closest to her,” the film begins. “It is a story of courage and tenacity, of unbelievable devotion to her art and to those who she loved and who, in the end, left her penniless and alone, even to the extent that she was buried at first in a pauper’s grave. It is the stuff of fiction except that it is true.”

Dame Margot Fonteyn (1919-1991), who was born Peggy Hookham to a British father and a Brazilian-Irish stage mother who came to be known as “The Black Queen,” danced her whole career for the Royal Ballet. “She represented England. That was it. She was the face of the motherland,” observes biographer Meredith Daneman.

“She had the curious quality of making you want to cry,” said Robert Helpmann, her first dance partner. “She had very bad judgment about people,” adds former assistant Colette Clark. “That was her weakness. … A lot of people used her, exploited her, cheated her.”

The way Fonteyn told it, in 1937 at Cambridge she fell “suddenly and instantly in love” with Panamanian playboy Roberto “Tito” Arias. They were married in 1955.
Fonteyn helped Tito smuggle guns (for which she was once arrested and briefly jailed), overlooked his incessant philandering and, according to some, for the decades of their marriage supported several members of his extended family — none of whom had the slightest interest in Fonteyn beyond her earning capacity.
In 1964, Tito was shot and paralyzed in an assassination attempt, reputedly by the jealous husband of a lover. Fonteyn nursed him for the next 25 years, moving after her retirement at 61 to a remote farm in Panama where Tito raised prize bulls (bought of course by Fonteyn). The day he died, in 1989, a long-time mistress committed suicide by drinking swimming-pool chlorine.

Through it all, Fonteyn danced. Her creative partnership with Rudolf Nureyev, who was 20 years her junior, began when she was 42 — an age at which the average ballet career is decisively over. Though virtually unable to walk, she was still occasionally performing when she was 67, in large part to support Tito.

One of the most moving moments in the film is when New York Times dance critic Clive Barnes chokes up as he recalls: “The regality and grace and a kind of spring in her step. And of course you remember the first roar … that wonderful pose at the beginning of her entrance … gone.”

Still, to a person, the attitude of her handlers, associates and intimates toward Tito was: “She could have had better. She deserved better.” Our culture pathologizes such fidelity, labeling it co-dependency or love addiction.
But love segues into pathology only when we put our own vocations on hold in favor of the lesser vocation of another. Fonteyn gave her all to Tito while also giving all to the dance — and thus to us. In fact, minus the unrequited love, one senses she would have been a lesser dancer, not a greater one.

“The Sleeping Beauty,” composed by Tchaikovsky and choreographed by Maurice Pepita, premiered in St. Petersburg in 1890. Based on a Brothers Grimm fairy tale, the play opens as Carabosse, a bad fairy, puts a curse on the baby princess Aurora: on her 16th birthday, Aurora will prick her finger on a spindle and die. When the princess turns 16, a good fairy intervenes, commuting the sentence of death to a 100-year sleep. A hundred years later, Prince Désiré, out hunting in the woods, is led by the good fairy to an overgrown castle and awakens Aurora with a kiss.

Fonteyn danced the part many times. It will be staged by the Los Angeles Ballet on five dates from Feb. 21 to March 29.

Soon after Tito died, Fonteyn was diagnosed with cancer. Her money was gone.

She converted to Catholicism on her deathbed in order to be buried with him.

The class, the heart, the love for a wastrel: O Jerusalem.

“She was a true heroine,” observes biographer Daneman. “You identified with her. …This woman was there, sort of doing it for you. That was the ability, the quality she had. That she was dancing in your place. That is, if you could dance, that was what you would do. She would embody it for you.”

“She was longing to give all her love to somebody,” Colette Clarke offers, insinuating that Fonteyn missed the mark. Keith Money, another former assistant, opines, “These [public icons] are sacrificial victims. They’re put on a stone and they’re pulverized.”

Perhaps. But watching Fonteyn dance “The Sleeping Beauty,” alone in a darkened room, at the end of the iconic Rose Adagio I spontaneously rose to my feet, weeping, and, 50 years after the fact, applauded.

Perhaps this ability to waken what is deepest in us is something of what Christ meant when he said, “Except a grain of wheat falls into the ground and dies, it abideth alone: but if it dies, it brings forth much fruit.”