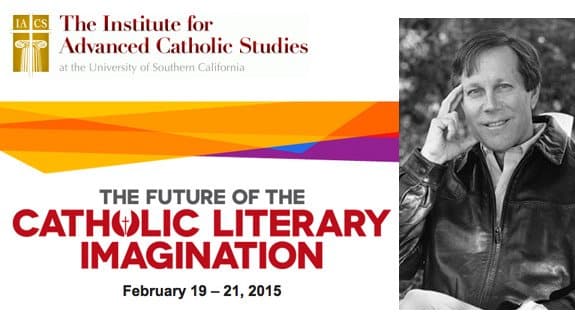 Dana Gioia is a poet and critic who served as chair-man of the National Endowment for the Arts. He is the author, most recently, of Pity the Beautiful, his fourth volume of poems.

He also has a genius for connecting people. To that end, he’s spearheaded a conference called “The Future of the Catholic Literary Imagination” that will take place at USC on February 19-21, 2015.

Sponsored by the Institute for Advanced Catholic Studies at USC, the conference will feature Julia Alvarez, Ron Hansen, Alice McDermott, Kevin Starr, Tobias Wolff, and Gioia himself, as well as “many more leading writers, critics, scholars, editors, and journalists—young and old, Catholic and non-Catholic–in a dynamic, serious (but never pious) conversation about the relationship between faith and literature in contemporary American culture.”

You were born and raised in a blue-collar family in Hawthorne, California. How did your own Catholic literary imagination first catch fire?

I was raised in a Catholic family in a mostly Mexican neighborhood and attended twelve years of Catholic school. Consequently, my whole early worldview was Catholic, and it seemed consonant with the great art I encountered—Dante, Michelangelo, Mozart, Shakespeare. The creative vision of these artists was reinforced by their spiritual vision. Those early experiences shaped my sensibility. Art without a metaphysical dimension still feels diminished to me.

For fifteen years you worked by day as an executive at General Foods and, at night, wrote poems.

In my case, that helped me to spend years away from the literary world and the university. I worked in an office during the days, and then I went home to write and read. I wrote almost every night of those fifteen years. It was a hard way to live in some respects, but it gave me a chance to explore and discover who I was without the pressures of the commercial or academic marketplace. Solitude and contemplation are necessary disciplines for a poet.

In December, 2013, you published a piece in First Things,”The Catholic Writer Today” in which you decried the poor quality of contemporary Catholic literature.

I was pleased to see the huge response my essay generated. The reactions were overwhelmingly positive, despite a few complaints from various quarters. It’s nicer to be praised than attacked, but at some level it didn’t matter whether people liked the piece or not as long as they engaged the ideas. I wrote the essay to change the public conversation about faith and the arts. The conference was simply the next step. Literature needs a lively community to prosper.

The conference is open to the public and free. Can you speak a bit about why both Catholics and non-Catholics would be intrigued by the speakers and workshops?

We wanted the USC conference to be free because there should be no barriers to attend. I know many writers—young and old—who make little money. In particular, I know many Catholics who work for church schools or institutions at very small salaries. I want them to be welcome at the conference. I also want students to attend. This meant that we had to raise much more money, but why do such a gathering unless it lives up to our values? We didn’t want a small conference for the elite. We want everyone there, young and old, rubbing shoulders.

We have invited the best Catholic writers in the U.S. to speak at the conference—major novelists like Alice McDermott, Ron Hansen, and Tobias Wolff as well as major poets like Julia Alvarez (who is also a best-selling novelist). California’s great historian (and former State Librarian) Kevin Starr will speak. He is a national treasure. Meanwhile we will have dozens of significant poets, critics, journalists, publishers, and novelists speaking. The atmosphere will be intellectually engaged but friend and democratic.

What kinds of surprises might the conference have in store?

The real surprise of the conference will be how many people will find their lives changed by attending. That sounds ambitious, but it is true. People who attend will hear people and meet people they would not otherwise meet. These encounters—intellectual, spiritual, social—will awaken things inside them. In ways both large and small their lives will be enlarged and transformed. I’ve seen it happen many times. Why else go to all the trouble of creating these three amazing days.

What signs of hope do you see on the Catholic literary horizon?

I believe things are going to change for the better. This country is full of deep spiritual hunger. The arts are in trouble. The audience for serious culture is shrinking. Literature been marginalized by the electronic media. There is a great need for cultural renewal. We need art that can speak to what is best and deepest in our humanity. Faith can play a part in that renewal, especially the enormous riches of the Catholic tradition.