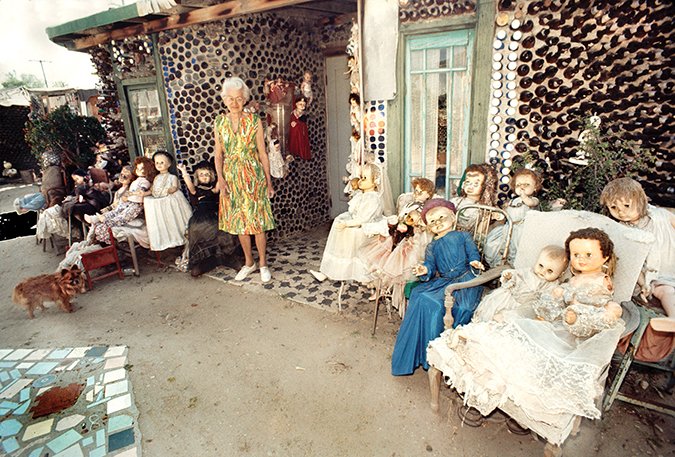 “I feel that what people call by the word ‘scavenger’ is really a resurrection.”
–American sculptor Louise Nevelson (1900-1988)

Tressa Luella Schafer—the woman who would come to be known as Grandma Prisbrey—was born in Easton, Minnesota, the youngest of eight children.

In 1912, at the age of 15, she married the ex-husband of one of her sisters. Theodore Grinolds was 52 at the time, 37 years her senior. They had seven children together before Theodore died in 1931.

Tressa moved to the Pacific Northwest, where she worked as a barmaid and factory worker before moving with her children to Santa Susana, California (now Simi Valley) in 1946. In 1947, she married Al Prisbrey.

In 1955, together they bought a third of an acre of land and a trailer to plunk on it. Today, the town, and the lot, are built up all around. At the time, however, Simi Valley was open farmland with a view clear to the mountains.

The lot was next to a turkey farm. To keep out the dust and feathers, Tressa thought to build a wall of concrete. She stuck bottles in it sideways for decoration.

She began collecting pencils, amassed nine thousand, and decided to build a Pencil House—again of concrete and bottles—in which to store them, displaying many on velvet and under glass.

She kept building. At the age of 60, Grandma Prisbrey, as she was known by this time, exploded.

During the next five years, in a borderline-berserk burst of energy, she erected structure after structure.

Grandma began to visit the nearby dump daily. She built wishing wells, a Shell House, an Agitator Garden (old washing machine parts), a Cabana/Card House (Grandma loved to gamble), and a Shrine to All Religious. She constructed a Doll Head Planter and a Parade of Dolls Doll House. She erected a Rumpus Room for her grandchildren, a Meditation Room, chapels, huts, flower stands and a Headlight Planter.

She connected them all with cement walkways in which she embedded bullets, combs, hood ornaments from cars, broken pieces of tile, keys, razors, and baby pacifiers.

She created as she went. For the most part, the buildings had no timber, no structural support, no solid foundation. She used found paint, she experimented, she manipulated colors.

Many of the structures were damaged in the 1994 Northridge earthquake, but volunteers still conduct occasional tours. I went on December 14, 2014, a clear winter morning after a hard rain. The whole long narrow strip of land—250 feet deep and 50 feet wide—is a coherent, interconnected assemblage of folk art, driven by spontaneous whimsy, thought, hard work, creativity, and love.

Grandma never considered herself an artist. “If you’re feeling bad, find something to do and do it!” was her homespun advice and it’s fascinating to contemplate the mind that would think to wire clutches of tiny glass medicine bottles from the branches of a decrepit tree, to group a stand of broken aluminum coffee pots into a “garden,” and to bust a bunch of Sputnik-era TV screens loose from their frames and run up a Television Tube Fence.

The background information on Grandma is anecdotal, sketchy and sometimes conflicting. When one of her daughters was dying, the story goes, Grandma installed her in one of the structures and built a heart-shaped planter, filled with rose bushes outside her door. The day the roses bloomed, her daughter died.

People began rubbernecking. People began dropping by to bring her bottles and other castoffs, wanting to hang out and chat. Grandma quickly realized she didn’t have time for such distractions and gave them the boot.

Sometime in the 60s, after the bulk of the structures were completed, Grandmae bought a silver Royal Spartanette, manufactured by the Getty corporation. The trailer still stands on the lot (though is not open to the public).

A team of volunteers, pledged to preserve and protect the village, established the site as a non-profit. They welcome help. Trees need to be cut, rubble needs to be cleared out, piles of bottles need to be sorted.

“Did she have any explanation for such a sudden, sustained burst of energy?” I asked our docent Alice. “I don’t think so,” Alice replied. “It’s just one of those things that show human beings are…different from other creatures on earth.”

The sun glowed through the walls of the lopsided structures, creating jewel-like bursts of color: Milk of Magnesia blue, Coca-Cola green, Mrs.-Butterworth-syrup amber. I thought of how quick we are in our culture to discard: appliances with life left in them, difficult situations, friends.

She left us Bottle Village—and this: “What people throw away, I could wear to church on Sunday.”