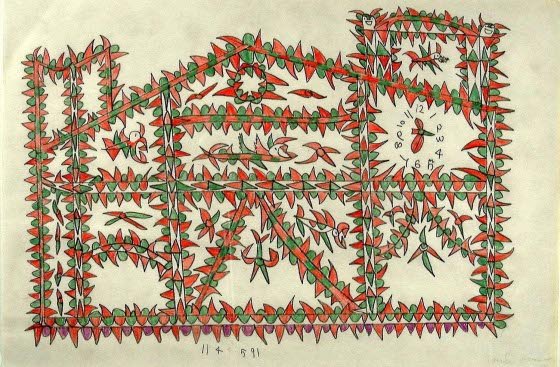 “He had no plan, no real artistic intent. That’s not how this works. This kind of art—visionary art—is more like a ball of fire stuck in the body that finally bursts forth out of the mouth and eyes. He represented, as best he could and with the materials at hand, the spirits who had tormented him, drawn him in, tricked him. During the last eight years of his life, after he had spent nearly a quarter century in Texas jails and prisons, and before he died of cirrhosis of the liver in 1969 at age 70, Jones exorcised his demons by drawing them, by taking them out of his confused mind and jailing them on paper. They had menaced him throughout his miserable existence. They had made him do such shameful things. For the first time in his life—as a poor black man in the South, as most likely a paranoid schizophrenic, as a man who may not have been guilty of some or all of the crimes for which he was convicted (we’ll never know)—he held some small power over his circumstances. His aunt had told him he would be powerful. But he had felt so weak throughout his life, so at the mercy of his demons and the laws and codes of a white man’s world. His cell was within walking distance, if you could make the steel and concrete vanish, of the infamous Texas execution chamber, and every time the state took a man’s life another haint was born. Inmates suffered, then died, then they came back to make others suffer. A circle of suffering. Only Frank could see it. His curse. He kept drawing.”